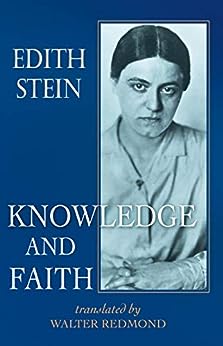 Adam
5.0 out of 5 stars Excellent
Reviewed in the United States on August 26, 2018
Verified Purchase
Here we have yet another excellent work by the brilliant saint, Edith Stein (Sister Teresa Benedicta of the Cross).
This book contains two main works, and then a few drafts/fragments of works that all in some way address or come to terms with how "knowledge and faith" relate to each other (another reviewer said that this could more accurately/specifically be said to be how "science and faith" are related, but that is definitely misleading if by "science" that reviewer meant merely the empirical sciences such as physics, chemistry, biology, etc. instead of "science" in its fullest science which would also include philosophy, the other humanities, the social sciences, mathematics, and really any field of study).

The first work included (entitled here "Husserl and Aquinas: A Comparison"; originally "Husserls Phaenomenologie und die Philosophie des hl. Thomas von Aquino: Versuch einer Gegenueberstellung" - "Husserl's Phenomenology and the Philosophy of St. Thomas Aquinas: An Attempt at a Comparison") is Stein's contribution to the Husserl Festschrift of 1929 ("Festschrift" is a German term that refers to a volume of an academic journal that is dedicated to some person - normally a teacher/professor/etc. - which contains a number of essays normally written by his students; these essays tend to address topics that are in a similar field as that professor's academic focus, or topics related to how that particular student and that professor see each other's work). Stein's contribution was an essay comparing/contrasting the philosophy of Edmund Husserl and that of St. Thomas Aquinas. Her essay tackles this comparison in several ways including a discussion on the theocentrism of Aquinas' system and the egocentrism of Husserl's phenomenology, and the limits inherent in a philosophy that does not permit supernatural principles of knowledge. Those of a Thomistic background should read this work as it clarifies several misunderstandings Thomists tend to have about phenomenology.

The other main work ("Ways to Know God")was intended to be a contribution to the American journal "Philosophy and Phenomenological Research" but the editor (Marvin Farber) found it to be too theological for inclusion. It finally was published in "The Thomist" some years later. Farber's criticism was largely justified. While Stein does certainly employ philosophical reasoning and the phenomenological method throughout, the essay is an exposition of Pseudo-Dionysius' theological work and therefore operates almost entirely within a particular dogmatic frame (this is not a criticism: I have the honor of living within the same dogmatic frame as the saint).

As for the other works, they really are meant for the more scholarly who, if he needs to read them, will probably do so in the original German, or otherwise at least not be content with the simple summary I could provide here, but instead will thoroughly study the fragments themselves. For those reasons, I'll pass over them in this review.
Read more
4 people found this helpful
Helpful
Report abuse

Trudie Barreras
TOP 1000 REVIEWERVINE VOICE
4.0 out of 5 stars Offers a rich field for reflection
Reviewed in the United States on June 2, 2015
Verified Purchase
As was mentioned in the biography I read that started my project of delving into Edith Stein’s own works, as a result of the Nazi persecution which ended in the death of the woman who was then known as Sister Teresa Benedicta of the Cross, much of her writing was lost or destroyed. The present book, “Knowledge and Faith”, is actually a collation of several very different articles. The first section is a comparison of the thought of Stein’s philosophy mentor, Edmund Husserl, with that of Thomas Aquinas. It is presented as two versions of an imaginary dialog between these two men. This is followed by two relatively short essays, one titled “Knowledge, Truth, Being” and the next, “Actual and Ideal Being, Species, Type and Likeness”. The final section, which is really the meat of this text, is “Ways to Know God” and is subtitled “The ‘Symbolic Theology’ of Dionysius the Areopagite and Its Objective Presuppositions”. It is noted in both the Foreword and Editor’s Introduction to the book that this essay in particular was submitted under the most stressful of circumstances. Though originally intended for publication in one journal, it was deemed a poor fit for the category of writing that journal carried. Before it could be reviewed and submitted elsewhere, Sister Teresa had been arrested and deported to Auschwitz, and was never heard from again. It finally appeared in English translation in the July 1946 issue of “The Thomist”.

This current compilation was issued in 2000 by the Institute of Carmelite Studies in Washington, DC. Again I note that by this time, Sister Teresa Benedicta of the Cross had become Saint Teresa Benedicta as a result of the proclamation of canonization issued in 1998 by Pope John Paul II. And again from my point of view, I believe this author’s thought is very valuable indeed as we begin to try to reconcile the many conflicts which seem to have evolved over the centuries between – as the title states – “knowledge and faith”, or perhaps more specifically, “science and traditional religious belief”. I believe it is a real blessing that as a result of the Church’s elevation of Edith Stein to sainthood, a new interest in her writing has developed. Her writings, fragmentary though they may be, offer a rich field for reflection.
Read more
4 people found this helpful
Helpful
Report abuse

OrganicSmarts
5.0 out of 5 stars Brilliant dialogue between Thomas Aquinas and Husserl
Reviewed in the United States on August 25, 2008
Verified Purchase
Knowledge and Faith contains both the Catholic and secular (edited for publication) versions of Stein's comparison and combination of philosophers Edmund Husserl and Thomas Aquinas. While these two are quite different on the surface (as the progenitors of phenomenology and Thomism, respectively), Stein manages to place them in immediate confrontation and display an amazingly keen understanding of both. This is, in some ways, not surprising since she was both a student of Husserl (who deserves the credit for actually saving much of his work) and a follower of the Catholic Church of which Thomas Aquinas is a "doctor".

There is also an essay on Pseudo-Dionysius included, but I recommend this book primarily as a must-read for those who wish to understand the intersection of Thomism and phenomenology).
Read more
25 people found this helpful
Helpful
Report abuse