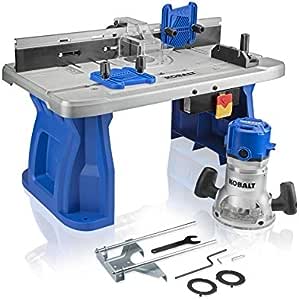 Powerful 12-amp motor provides the power to accomplish smooth quality cuts. The cast-aluminum base and motor housing reduces the weight of the unit. The router table is included in this combination package.

Matthew Ohrenberg
1.0 out of 5 stars Motor lasted 2 hours. DO NOT BUY FROM THIS SELLER.
Reviewed in the United States on May 16, 2019
Verified Purchase
This router lasted me 2 hours before it died.
I initially tested a 1' peice of wood to see if I like the Router bit I had chosen, and then last night I began making trim with it.
1st. The fence is not tall enough so you have to buy new screws and stack boards if you want the fence to fit a 3" tall bit.
The Router lasted 2 hours before before it began cut cut in and out, hand to be hand spun to get it going (like it had bad brushes) then it began to smoke and died all together.
I was routing soft Whitewood 1x4 boards from Lowes too, so I never even strained it.

Seller refused to accept a return.
Update: I bought a new one directly from Lowe's, and realised there was 1 kissing featherboards with this purchase.
I'm not sure if they're reselling factory returns or what, but it's highly suspicious that the motor died in only 2 hours, and there were parts missing.
BUY ELSEWHERE.

Michael Rodrigues
2.0 out of 5 stars TABLE ROUTER
Reviewed in the United States on September 9, 2019
Verified Purchase
HAVE HAD IT FOR 3 MONTHS, NOW HAVING LOTS OF PROBLEMS TRYING TO US IT AS A TABLE ROUTER AND NOW WHEN I TRY TO USE THE DEPTH SETTING IT DOES not WORK SLIPS DOWN AND HAVE TO PUT, MY HAND UNDER THE ROUTER TO SET?? WHEN I went to use the miter gauge it would not slide it was bent. took me several hours to get it to work. works a little, tried to get it replaced but NO LUCK FROM THE SELLER YET AND AMAZON JUST GIVES ME THE RUN AROUND. HAVE HAD TO FILE A CLAIM, SO FAR NO WORD!!! THIS REALLY SUCKS
Read more
14 people found this helpful
Helpful
Comment Report abuse

Carolinemorales00
3.0 out of 5 stars Nice
Reviewed in the United States on December 30, 2019
Verified Purchase
Cheaper at Lowe’s! But is a good piece of machinery!
Read more
10 people found this helpful
Helpful
Comment Report abuse

OKF
5.0 out of 5 stars Powerful AND light
Reviewed in the United States on July 25, 2020
Verified Purchase
Powerful, yet light. The holy grail of power tools. Can tool manufacturers deliver solid power in a light, manageable tool? Kobalt has achieved that with this router/ table set.
The router itself is as powerful as any I have had before and delivers high rpms no problem. Yet, by using plastic legs and aluminum table top Kobalt has built a tool that weighs only 19 pounds, fully assembled!! And it feels even lighter in hand. It can be easily lifted one-handed.
It is light, but definitely not light duty. I get good power out of it and it accepts 1/2" and 1/4" bits, so it's versatile too.
Bonus: it runs relatively quiet too!!

Cons:
Fence not as precise as desired