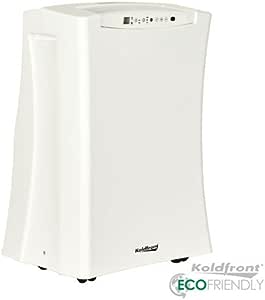 by Koldfront
3.3 out of 5 stars 38 ratings
Currently unavailable.
We don't know when or if this item will be back in stock.

3.3 out of 5 stars
3.3 out of 5
38 customer ratings
How does Amazon calculate star ratings?
Amazon calculates a product’s star ratings based on a machine learned model instead of a raw data average. The model takes into account factors including the age of a rating, whether the ratings are from verified purchasers, and factors that establish reviewer trustworthiness.
Top Reviews

ASong2sing2
4.0 out of 5 stars Perfect for my bedroom
Reviewed in the United States on August 13, 2014
Verified Purchase
Of course, as soon as I bought this our weather went back to 70's and 80's. <grin> But I have run it several times during the afternoon to cool down the bedroom. It is easy to set up....with a few modifications for my window. and cools the room off fast. I have a regular size bedroom with small bathroom attached. (bedroom is 8x12). My power bill did not go up that much last month. I like that I can set it to run for a certain time. And, if it ever gets hot enough, I can set the timer to turn the unit on before I come home to cool the room down.
Read more
Helpful
Comment Report abuse

M. Park
3.0 out of 5 stars Cools ok, still waiting for it to get cooler
Reviewed in the United States on June 26, 2013
Verified Purchase
After reading the rather not so impressive reviews for the Frigidaire 7,000 BTU portable AC, I decided to get this one instead. I wanted a unit that didn't break the bank but could cool my room within a reasonable amount of time. I just got this unit today and I'm doing a "after 2 hours of running it on high" review.

I live in an apartment that has jalousie paneled windows and is overlooked by a property management company that is run by a rather strict person who won't allow me to do much, if anything to my apartment. Because of this, I felt that it was probably better for my stay here to get a portable air conditioner. I am using this for a ~120 sq ft bedroom with an outside temperature of 83 degrees and average humidity of 60-80% depending on the season.

First off, the thing is quite heavy. I don't lift weights, so it was a bit difficult getting the thing to my front door. I strongly suggest using a handtruck or getting the help of a friend if you have to take this far distances. Once you can get it out of the box and onto a floor though, it comes with four casters attached to the bottom to easily roll it to where you need it.

Setup was pretty straightforward. Much like someone else did in their review, I had a hard time getting the exhaust cover off the grill window adapter. You will need a flathead screwdriver to get this thing off. Using my fingers didn't help.

Next, the manual states that the machine is supposed to come with two duct connectors that are angled. Mines came with only one - the other side of the duct already had a straight duct connector screwed onto it (which can be taken off if needed). Kind of annoying, but not enough to dock off a point.

The window that I could use to exhaust air was located farther away from the unit than I expected. Just remember, you will be given a maximum of THREE FEET for the plastic duct itself, and you'll want to leave about a half foot of slack each for the connectors (the duct is plastic, hence the necessary slack). In other words, this will probably be positioned directly below the window you want to plug it into.

The window adapter is a PVC panel, but it comes with two extensions if needed. The adapter itself has a fixed and short length that should fit most windows. My jalousies were a bit bigger, so I used one of the two plates to attach it to the adapter to extend it to the perfect size for my window. This should be sufficient for most jalousie window users and also vertical and horizontal sliding windows.

Jalousie windows don't have the best air/sound insulation. There's lots of little cracks where air will escape/enter into windows and whatnot. This is why it's best to buy a unit that is slightly oversized for your use. As someone has pointed out, warm air will also want to come back into the bedroom you're trying to cool, so do your best to try to insulate as much of the area as possible. I'm a cheap person so I just used duct tape.

So after running this thing for a couple hours with the fan on high in cooling mode, my room which was initially at around 75% humidity (according to my weather application on my phone) and was 83 degrees (according to the LED readout) now is at 77 degrees. I haven't seen it drop any lower. I do run a high end computer gaming machine 24/7 that could be contributing to the heat load, but this unit is supposedly advertised to be able to cool a room that's 250 sq ft, where my room is 120.

That's a 6 degree temperature drop after 2 hours of cooling, which I suppose is okay, but I was hoping it could cool my room a bit faster. I might have to get a higher BTU unit simply because of the inefficient design of the windows in my room.

The vent for the machine pretty much points straight up at the ceiling. In theory this should work as cool hair tends to sink, but since I only care about having it cool *me*, this might be a design flaw that will annoy me, since I would prefer the vents just point at me. I'll probably deal with it once I get used to the way this machine works.

I'd say if my room was slightly smaller, maybe 100 sq ft, this AC would be JUST the right size, but as of now, I would try to find a way to borrow a 7000 BTU unit from somewhere and test it out in your room if your room is about my room's size and see if it'll help any. I MAY consider upgrading to a 8000 or 9000 BTU unit now that I know how this one works. I only run this unit when I get home from work in the evening and I'll probably only run it in the weekends if it gets unbearable, so for my purposes I think this thing is sufficient.

Hopefully this helps you guys make an informed decision about your machine. If your bedroom only contains something simple like a TV and nothing else, this machine is probably great for you, but I'll probably have to get a slightly stronger unit because of the massive amount of heat my CPU generates.

Kaylynn Dubuque
2.0 out of 5 stars I didn't want a heater...
Reviewed in the United States on June 20, 2014
Verified Purchase
I plug it in to see if it works, my room was already on the cool side. After running it for an hour my room went from 68 to 74. I needless to say I sent it back and didn't get a new one. I most likely got one that was horribly defective but it was a hassle to get it repack it and drag it to a ups store, its not small.
Read more
One person found this helpful
Helpful
Comment Report abuse

Goodtherapy
5.0 out of 5 stars This beat the window unit
Reviewed in the United States on November 2, 2013
Verified Purchase
Wow! So much easier to handle than a window unit. It was easy to set up, readily portable (though the vent attachment could be a nuisance to transplant from one window to another), its output is excellent, and it's not loud. The condensation-prevention system seems to work like a charm. If it holds up like this for a few years, we'll probably look at getting a few--storing them for the winter is a snap compared to wrestling out conventional units, especially when they're dirty and dripping.
Read more
2 people found this helpful
Helpful
Comment Report abuse

Malachit7
2.0 out of 5 stars Still sweating
Reviewed in the United States on August 31, 2013
Verified Purchase
Shipping was on time. AC blows strongly (but too loudly), and still will only cool my second floor room to 74. Still sweating... Wouldn't buy again.
Read more
5 people found this helpful
Helpful
Comment Report abuse

WillGEB
3.0 out of 5 stars struggles keeping 180 square feet cold.
Reviewed in the United States on July 9, 2013
Verified Purchase
It has been mid 80s and the unit struggles to drop the temperature to the mid 70s. Only in the middle of the night does the display read 70 or below by a degree or two. Works ok.

I wish that the LEDs on the front of the unit were dimmable because they are pretty bright at night.
Read more
3 people found this helpful
Helpful
Comment Report abuse
See all reviews from the United States