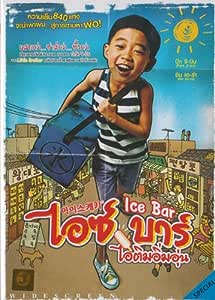 Ice Bar, is a nostalgic throwback to the familiar family film genre evoking childhood yearnings, familial sentiments, and the quiet atmosphere of a bygone era that defined today's adult generation. Young Rae (Park Ji Bin), a bright ten-year-old boy living in the countryside with his mother, is often teased by classmates for not having a father. One day, Young Rae discovers that his father whom he believed to be dead is actually living in Seoul. To raise money for the long train ride to Seoul, he sells ice bars on the street, ice bars that will bring him to his father.

Carl Fenn
4.0 out of 5 stars Childish warmth of summer
Reviewed in the United States on January 1, 2013
Format: DVD
It's the summer of 1969; Young-rae is sick of being called a "fatherless bastard" and his mother's rival tells him that his "dead" father actually lives in Seoul. Young-rae sets his sights on meeting him, but first he has to earn the train fare. Picking up a job at the local Ice Bar factory, Young-rae has to walk the streets all day to earn his wage.
Crammed full of childish wit, Ice Bar turf warfare and some of the best child acting I've seen in a very long time, Ice Bar is definitely a big hitter in my books. Not only does it have the wit of The Goonies, it has hints of 60s Korean politics and even the odd Railway Children moment (even before the scene with the train).
Ice Bar is one of those films that doesn't try to be bigger than it is, but doesn't sit at the bottom of the stagnant pile of modern comedy films. It's definitely one of those films that fills you with the childish warmth of summer.


Read more
Helpful
Comment Report abuse
See all reviews from the United States
Pages with related products. See and discover other items: all movies on dvd