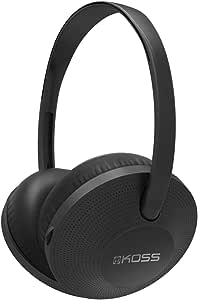 3.8 out of 5 stars
3.8 out of 5
19 customer ratings
How does Amazon calculate star ratings?
Amazon calculates a product’s star ratings based on a machine learned model instead of a raw data average. The model takes into account factors including the age of a rating, whether the ratings are from verified purchasers, and factors that establish reviewer trustworthiness.
Top Reviews

BKarno
3.0 out of 5 stars You May be Dissatisfied if Your Head is the Wrong Shape
Reviewed in the United States on June 18, 2020
Verified Purchase
Just so people understand where I'm coming from, I have to admit that I’m from Milwaukee (the home of Koss) and I’m a huge Koss fan. I got my first pair of Koss headphones, the Porta Pros, in 1986 and I’ve been a fan ever since. I have probably somewhere in the neighborhood of 15 to 20 pairs of Koss headphones in my home right now along with many other pairs of mid-range to high-end headphones. I own pairs of Koss’s budget earbuds up to their top of the line ESP950 Electrostatics and many pairs in between and I’m impressed by all of them. I was immediately interested in this new version of the KPH7’s when I saw the post on Instagram so I headed to the Koss store on Amazon and bought a pair. I was intrigued by the weight of the headphones, the 18 hour battery life, and the use of Bluetooth 5.0. The package arrived this afternoon, I unboxed the headphones, and tossed them on the charger for an hour. My excitement, however, was short lived because after I connected the headphones to my phone and placed them on my head I discovered a fatal flaw with the design that will make these headphones very unsatisfying for many people.

With many headphones, including these KPH7’s, a good seal between the headphone and the listener’s head is essential for full range audio to be heard. If that seal is broken even a little bit the lower-mids down to the bass frequencies can be almost totally lost and the headphones will sound tinny, and that’s the case with the KPH7’s when I wear them. So why not just adjust the headband and tilt the ear cups so you get a better seal? Because the cups don’t tilt (well maybe about 1/16”) and the cushions are too thin to create a full seal. Unlike some Koss headphones I own, I didn’t need to extend the headband as far as it would go to align the ear cups with my ears, which was nice. But because the ear cups barely tilt and due to the curve of the headband itself, the top of the cups don’t seal. It was easy to find the missing sound by simply pressing a little bit on the tops of the cups to seal them to my head, and honestly they sounded really good. For an ultra-light, thirty dollar, 18 hour battery, Bluetooth 5.0 headphone the highs are good as are the mids, and the bass is deep without being boomy and messing up the mids and highs. I found the overall sound to be very pleasing and well balanced. Unfortunately, I can’t be pressing the cups against my head for hours while I listen. Based on the geometry of the headband, if you have a small head or a wide head you may have better luck with these than I’m having. But the fact that the KPH7’s don’t provide adequate articulation tells me that a lot of people will not be able to comfortably enjoy this headphone’s full sound potential. Even eyeglass wearers could experience the bottom falling out of the sound if the temples of their glasses break the seals.

At this point I can’t speak to the real-world battery life or durability of the KPH7’s, and my comments on the sound quality were after only about 10 minutes of listening. The build quality is good, and the controls are easy to learn and to use. The headphones do come with a USB charging cable (just a cable) but it’s only about 4 inches long. I’m just really disappointed because these could have been very useful for me. I’ll probably see if someone I know can fit into these or doesn’t care about the sound issues. God only knows I’ve given away plenty of PortaPros and KPH30i’s over the years.

Sorry Koss. I’m still a fan, but I don’t know how this product gets out of the design/testing phase. This is the first pair of headphones I’ve ever owned that wouldn’t seal properly for me so I don’t think it’s the shape of my melon. I’m just down the road in O.C. if you want an engineer/headphone enthusiast who’d love to do some product testing. And hey! When are those awesome looking headphones you’ve been showcasing on your billboard for the past year-and-a-half (Koss A/550) coming out? I don’t even know the details and I want them!

Update: I did some additional experimenting and found I was able to improve the sound a bit by wearing them kind of half on my ear half on the jaw area of my cheek. However, this was not as comfortable as wearing them fully over my ears, and even with the half on ear/cheek the sound was still not reaching its full potential. I also fully charged the headphones and used them at work for a solid 10 hours and the battery was still going strong.

R. Yoo
2.0 out of 5 stars Somewhat underwhelming.
Reviewed in the United States on June 19, 2020
Verified Purchase
tldr; This is a miss. I'm a big fan of some of Koss' other low cost gear (ksc75/35, porta pros, kph30i), and this headphone is similarly priced to move, but unfortunately this one just doesn't sound good and feels too cheap.

First, the build quality is poor. Super cheap plastic feel on both the cups and headband. And the headband feels like it's going to snap at any moment. Also, the promotional images do a really good job of hiding it, but there is a wire channel running all along one side of the headband, so it gives it a real 99-cent store feel and look. Also, NO 3.5mm JACK! These are strictly bluetooth only.

As for the fit, the cups don't have any sort of angle adjustment other than turning flat for storing, so you will have a hard time getting them to sit flat against your ear/head. Poor seal is no bueno for closed back. And the head band adjustment has no positive clicks or tactile markings, just plastic on plastic friction fit.

Sound quality is just okay. No wow factor like the first time you hear the above mentioned stuff. Feels like they were trying for more low end on these, but it just ends up sounding distorted at higher volume.

In conclusion, these are not the bt on-ear/over-ear koss headphones you were waiting for. You would be better off with the kph30i and a bt adapter.
Read more
8 people found this helpful
Helpful
Comment Report abuse