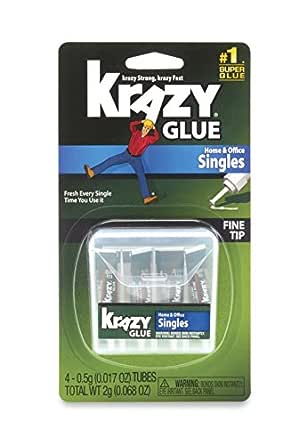 Specification for this product family

For a fast fix on the go, Krazy Glue Home & Office Super Glue provides the insanely versatile and lightning fast repairs you need. Its small size means it can slip conveniently into purses, briefcases, or craft drawers. Since it’s single use, you know it’s fresh when you use it. And its fine tip is great for precise fixes and delicate repairs. Small and strong, you can depend on Krazy Glue Single-Use Tubes.

For insanely versatile, lightning fast and conveniently portable everyday repairs, depend on Krazy Glue Home and Office Single-Use Super Glue. Pint sized but powerful, this craft glue is great for on-the-go repairs, slipping right into purses, briefcases or craft drawers. Fresh every single time you use it, each tube has the perfect amount of instant glue for one fast fix. Plus, the fine tip is great for precise fixes and delicate repairs. The #1 super glue, you can count on Krazy Glue for super strong, durable, crazy fast fixes.

4.7 out of 5 stars
4.7 out of 5
320 global ratings
How are ratings calculated?
To calculate the overall star rating and percentage breakdown by star, we don’t use a simple average. Instead, our system considers things like how recent a review is and if the reviewer bought the item on Amazon. It also analyzes reviews to verify trustworthiness.

STGuy
4.0 out of 5 stars It's Super Glue, Not Rocket Science
Reviewed in the United States on February 7, 2015
Size: 0.017 ozVerified Purchase
Super glue (cyanoacrylate) has it's limitations as does any and every glue. It's doesn't stick to every material and while it has very good tensile adhesion, it's susceptible to shear forces. Still, for many uses it's a pretty handy general purpose glue. There are no glues suitable for every situation, so the applications should be researched.

It's biggest strength is also it's biggest drawback. It gives nearly instant bonding, but when opened the shelf life drops dramatically. Simply put, if you use it once, the odds are pretty good that the tube will be nearly solid and impossible to use the next time you need it.

As mentioned in the product description title, there are SINGLE USE tubes. So don't expect to be able to close them for a subsequent, additional use. One and done. The quantity is also stated- .017oz. That's a tiny amount. Really tiny. But I've found it to be perfectly adequate for my occasional needs. I use a fraction of a tube, then toss it. It seems wasteful, but it's far less frustrating then finding the tube rock solid the next time it's needed. Personally, I consider *every* tube of every size as single use because of this. However, it's been very convenient to have a functional tube when I need it.

I bought this a little over a year ago, and the last tube was nearly solid. I was able to use it, but it was a mess, and you don't want this on your skin. So no tubes were DOA. The bang for the buck depends on how much and how often you use a super-glue. You can get a bigger tube for less money, but it ends up being rock solid, it might be a false economy.

Since this is sold and shipped by Amazon I'd have no problem sending back tubes that arrive dried/expired for a refund. That's a false economy all it's own, but that's me. A call to Customer Service might suffice, saving the trouble of returning it.

Robin D
4.0 out of 5 stars Single use product prevents waste; not a great adhesive for permanent repairs, in my experience
Reviewed in the United States on December 19, 2017
Size: 0.017 ozVerified Purchase
I have always had mixed feelings about cyanoacrylate glue because it often fails to be effective over time in the applications for which I have tried it. This form of the product at least avoids the issue of the remaining glue becoming useless after you open it for one use, since it is intended just to be used once. My use scenario this time was an attempt to repair a mechanical keyboard switch that had broken off after an accidental fall of the keyboard against an unyielding obstacle. It ended up failing, then reapplication failed as well, though that may have been due to operator error as I allowed the adhesive to spread too far and damage the key mechanism. I have had the experience that all repairs I have attempted with this product fail. This is entirely anecdotal, but there you have it. [It is effective at accidentally adhering my fingers together!]
Read more
2 people found this helpful
Helpful
Comment Report abuse

Evan
5.0 out of 5 stars These little guys are a life saver for emergencies like repairing a vinyl backdrop right before a photo shoot!
Reviewed in the United States on February 19, 2018
Size: 0.017 ozVerified Purchase
It happened to me recently, I have a big vinyl backdrop I use when I shoot videos and it's actually two large sheets of vinyl glued together, and sometimes in the rolling and unrolling, and folding and unfolding, the seams start to come undone. The other day I was about to go on camera for my youtube show and unrolled and hung up the backdrop, and the bottom half started falling off from the top half! I grabbed one of these little disposable tubes and it was the perfect amount to reseal the entire 10 foot length of the backdrop, bound the fabric and dried instantly and I was up and running in just a few minutes. The backdrop incidentally has been holding strong, and I still have 3 tubes left if I need them. Great product.
Read more
One person found this helpful
Helpful
Comment Report abuse

MooseTop Contributor: Camping
TOP 1000 REVIEWER
5.0 out of 5 stars Stick with me
Reviewed in the United States on December 19, 2017
Size: 0.017 ozVerified Purchase
Great stuff. The name Krazy glue has become fairly ubiquitous in the way “Band aid” has. In fact, Krazy glue was one of the first of these type of adhesives available to the consumer market.
The stuff just works, obviously not for everything. You need to be reasonable with your expectations. Follow the instructions and you can get some pretty amazing results. I use it frequently. Of course I am a klutz. I break things all the time. lol
I find this particular configuration to be particularly convenient. Great for emergency repair in the vehicle and on the go or while traveling. I put one 4 pack in my first aid kit right next to the Steri strips. Another in my edc man purse/pack. For a couple bucks you really can’t go wrong. I do it. Thanks for reading
Read more
One person found this helpful
Helpful
Comment Report abuse

The Judge
5.0 out of 5 stars Better than stiches.
Reviewed in the United States on April 27, 2019
Size: 0.017 ozVerified Purchase
Can't believe the instant relief when you seal up a small paper like cut or weather cracked finger in a hard to heal spot. You know, like at the tip of your finger or on a joint crease. Might want to be careful about gluing your fingers together. Hurts like crazy when trying to pull them apart. Wearing some throwaway food handler gloves with a cutout for the part you want glued works well during the short drying period.. I seal the tube with scotch tape for short term capping. A couple days worked fine between uses.
Read more
One person found this helpful
Helpful
Comment Report abuse

PachamamaTop Contributor: Pets
5.0 out of 5 stars Genius Incarnate
Reviewed in the United States on December 26, 2016
Size: 0.017 ozVerified Purchase
Like the Goo Gone Pen, these individual use Krazy Glues may be the best invention since the wheel. Not sure what took which genius in development so long to think of this, but I'm sure glad they did--as I now don't need to worry about trips to the ER from people's fingers getting stuck to the once broken toy from excess glue, or my expensive, wooden kitchen table being destroyed by my hair-brained husband, who wouldn't put down newspaper and destroyed the finish from the excess drips off a lamp because he used the whole giant tube. Thank you, Krazy Glue, for this brilliant upgrade. I'd love to send you the bill for the 2K re-finishing job needed on my bamboo table, as NOTHING (not even pure acetone or paint thinner from the hardware) will take this stuff off. Fellow humans: always use newspaper. On the floor. Outside. With all children at least 1.5 miles away.
Read more
11 people found this helpful
Helpful
Comment Report abuse
See all reviews

Page 1 of 1 Start overPage 1 of 1
This shopping feature will continue to load items when the Enter key is pressed. In order to navigate out of this carousel please use your heading shortcut key to navigate to the next or previous heading.
Back
Next
Pages with related products. See and discover other items: Best Rated in Office Glue & Adhesives, Best Rated in Cyanoacrylate Adhesives, Best epoxy glues for plastic, Best glue for rubber, Explore super glues for metals