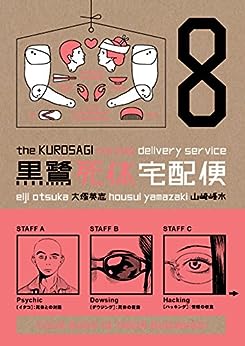 by Eiji Otsuka (Author), Housui Yamazaki (Illustrator) Format: Kindle Edition
Chapter 8 of 14: Kurosagi Corpse Delivery Service
See all formats and editions
Sorry, there was a problem loading this page. Try again.
Shigo kekkon--marrying the dead! It's a quaint old country custom in Japan that's becoming the next big fad in Tokyo . . . and that makes it the business of the Corpse Delivery Service! And meanwhile back on campus, since they're technically a college club, the kids from Kurosagi host a membership drive during the school festival! But you've got to like corpses, you know.
Read more
Previous page
Next page
Kindle e-Readers
Fire Tablets
Free Kindle Reading Apps
Available on these devices 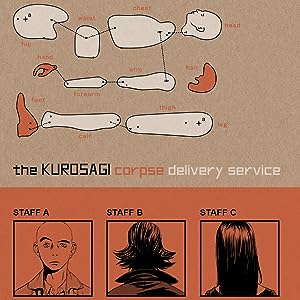 The new set of “deliveries” (chapters) about five contemporary Buddhist students using paranormal powers to solve murder mysteries serves romance with the usual chills and laughter. In the first, single-delivery story, the group tries recruiting new members to get a bigger campus meeting room; the one good prospect is pretty but spectrally elusive. In the following three-delivery adventure, they have to deal with big-time Yakuza, and the three-parter after it involves encountering an enterprise tangential to theirs. In all three stories, a KCDS-er becomes smitten as the plot unfolds, and distinctive Japanese funerary traditions are illustrated as well as explained. What a rich series this is. --Ray Olson

Johanna DC
5.0 out of 5 stars Stunning, enjoyable read
Reviewed in the United States 🇺🇸 on April 4, 2015
If you’re curious about The Kurosagi Corpse Delivery Service series, which I recommend, but you can’t find the early volumes in the series, try starting here.

Volume 8 begins with that manga classic, the school club recruitment drive. Rei is a new student at the Buddhist College all the Service members attend, and she winds up at the group’s open call for new members. They’re billing themselves as an entrepreneurial “money-makin’ club” to get some kids interested. However, seeing each of the Corpse Delivery Service demonstrate their individual abilities in gruesome detail is quite frightening to normal college students, even those who think they’re far out, so the results aren’t what they hoped for.

In addition to re-introducing the characters to the reader as Rei meets each of them, the chapter is also very funny in its portrayal of typical student types and hobbies. My favorite was the gothic lolita who thinks she’s a spirit channeler. The alien puppet takes her apart in amusing fashion. Which led to me realizing that some aspects of this series (like what the puppet is, exactly) are pretty hard to explain accurately, but they’re easy to grasp when reading. So I’m spending more time telling you about the humor and horror than it would take for you to just read and enjoy it.

I also want to call attention to the chapter openings. Each story, a few pages in, has an eye-catching double-page spread that could serve as a movie poster. The first has slivers of character closeups that perfectly shows their attitudes in one quick image, assembled in an edgy modern fashion. The next features Ao, unofficial team leader, marrying a skeleton as the others look on in varying states of consternation in a chapel. What an intriguing summation of how the group handles romance!

That’s the premise of the next three chapters, containing a story that starts with an art student who can’t find a job. (The underlying message of this series is sometimes “college students are poor and school may not help you prepare for the real world.”) He lives in a manga cafe and is temporarily helping out the Service members, who deliver a ridiculously expensive appliance to a stupid rich wedding planner introducing a new service: marriages for dead people.

There’s something brilliant about combining a funeral with a wedding, since they’re both reasons people often reunite with those they care about but don’t see any other time. The problem comes when only one of the partners is deceased, and the ghost really wants his partner. I think this is my favorite of all the Kurosagi stories so far, but then, I say that whenever I’ve read a new volume of the series.

The remaining story in this book is also three chapters, about dead babies being left in a drop box set up to save unwanted children from being abandoned. A nurse at the hospital finds surprising commonalities with Kuro, in that they both have a connection to the souls of the recently dead. There are hints that she may return, which I look forward to — yet another reason to continue with the series. (Review originally posted at ComicsWorthReading.com.)
Read more
Helpful
Report abuse

ChibiNeko
VINE VOICE
5.0 out of 5 stars I <3 this volume!
Reviewed in the United States 🇺🇸 on November 5, 2009
Once in a while, you'll find that one volume of a series that you really just love. That you keep reading over & over because you just like one or all of the stories in it. For this series, it's volume 8. (So far, anyway.)

This volume has what is quite possibly my favorite story of the series. In order to keep their club room & maybe even get some funding from the school, the members of KCDS attempt to gain new members. The requirements for entry are a little strict, but even so... only about 5 people show any interest in joining. After being insulted & horrified by the club members, most of the new recruits end up running off, except for one very special recruit! The stories after this one are just as good, although they didn't tickle my funny bone like the first story did. There's a story about weddings for the dead as well as a mystery surrounding deceased infants being placed inside a hospital dropbox.

The stories in this volume really do make this my favorite volume of the series. They're all well plotted out & you get a really nice feeling for all of the characters. The artwork is well done in this volume & you can see where it's improved over previous volumes. The only sour note for this volume is knowing that the next volume wasn't quite as good, which isn't this volume's fault at all.
Read more
2 people found this helpful
Helpful
Report abuse
See all reviews