You've subscribed to Gunfighter Adventures! We will preorder your items within 24 hours of when they become available. When new books are released, we'll charge your default payment method for the lowest price available during the pre-order period.
Update your device or payment method, cancel individual pre-orders or your subscription at
Your Memberships & Subscriptions
There was an error. We were unable to process your subscription due to an error. Please refresh and try again. 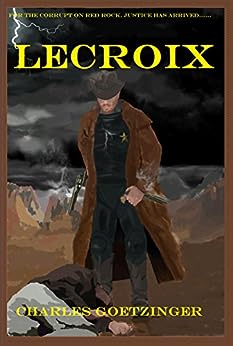 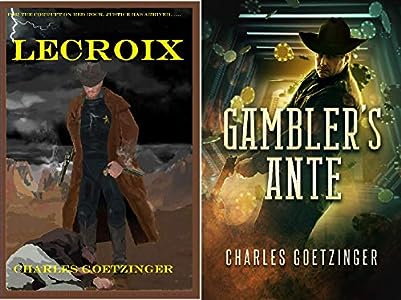 Elaine Emmerick
5.0 out of 5 stars A 5 ⭐⭐⭐⭐⭐ read!!
Reviewed in the United States on March 31, 2018
Verified Purchase
1. Characters 5 ⭐⭐⭐⭐⭐
Mason Lecroix is a Galactic Ranger, ex-special forces.
Jessica runs a bar called "The Thirsty Worm".
Jacob Lynch is the Sheriff of New Beginnings, works for the Governor.
Frank Valentine is the Governor.
Steven Talbot is Jessica's fiancee and head of security for the Governor.
Mr. Bradbrek is a mercenary.
Halkren and Delkin Arook are brothers Mason is looking for.
Jonas Keach is a local shop-owner in New Beginnings.
X-Ray is Mason's AI.
Chief Lonebrow is Mason's boss and mentor.
Catherine is Mason's lost love.
Katy Mervau is a bartender at The Thirsty Worm.
Samantha is Lynch's daughter.

2. Plot 5 ⭐⭐⭐⭐⭐
The story begins with Mason Lecroix standing on the sidewalk when two men approach him. He knew it was a stand-off; he prepared himself - who would shoot first?

Mason is in a small mining town, New Beginnings, on the planet Red Rock. It's at the rim of the galaxy. He's there, searching for two escaped convicts. He's told to check a bar called "The Thirsty Worm", run by Jessica. He arrives but doesn't see the two men. Jessica tells Mason to go to the refresher (bathroom); while he's in there, two men enter and wants to start a fight with Mason. Mason kills them, leaves the refresher and goes to the bar with a glass of whiskey waiting for him.

Governor Valentine has hired thugs as part of his security. Sheriff Jacob Lynch works for the crooked Governor. Steven Talbot is the head of security for Valentine. The Governor wants Mr. Bradbrek, a mercenary, to find out information about the man who beat two of his best thugs. Lynch barges in on Valentine and Steven, telling them the man they're looking for is Mason Lecroix.

Mason enters a clothes store. Four thugs enter and Lynch was there. They gang up on Mason, cuff him and beat him up. He wakes up in jail; Valentine wants to see him. Mason tells him he's going to kill him, Steve and Lynch. Still handcuffed, Steven starts beating him up again.

Valentine tells Mason his execution is in two days. Lynch and Keach are going to try and release Mason. They're going to meet at Jessica's bar to come up with a plan. Lynch and Keach go to the jail and tell Mason they want to get him out. As Mason nears the front of the jail, he sees Steven and Delkin. He breaks Steven's nose and throws him to the ground. Next, is Delkin, the man he's been looking for. He busts a coffee cup on Delkin's jaw and he falls to the ground. Mason heads out of town, towards his ship.

The Governor takes Lynch, Jessica and Keach captive. Mason and his AI, X-Ray shoot at Valentine and his men. Mason is able to rescue the three of them. He tells X-Ray to get them out of there.

Mason gets a message from Catherine. She lives on Argos 3. The last time he saw her was 6 years ago. He still loves her even though she's married. He hopes to see her again.

Will Mason arrest the Arook brothers? What about his feelings for Jessica? Can he learn to trust and love again? Will Valentine get his revenge? You'll have to read and find out!!

3. Writing Structure 5 ⭐⭐⭐⭐⭐
Charles has written a story that is fun to read! It's a sci-fi/western blend that works extremely well. He has created characters that are believable and can identify with. Mason is a complicated and pain-stricken man. He's had a troubled past that effects his present. He's loved and been hurt. Jessica has her own demons; she's in an abusive relationship. Until she realizes that Steven is only using her does she decide to tell Mason she loves him. These are real-life situations and Charles expands on them. His attention to detail puts the reader in the scene; you feel like you're right there!

4. Ending 5 ⭐⭐⭐⭐⭐
What can I say about the ending? It's absolutely brilliant! It's a fast-paced and exciting ending. The biggest shoot-out is "out if this world" - no pun intended!! Mason and Jessica express their feelings to each other. Steven gets what's coming to him. Valentine has a change of heart - sort of... I couldn't put the book down - had to read to the end!!

5. Overall 5 ⭐⭐⭐⭐⭐
This is the first book in the Mason Lecroix series. I throughly enjoyed reading this book. Charles has written a well thought-out story. He's created characters you care about. Mason is used to being alone, fighting alone. Now, here at New Beginnings, he finds people that care about him and will fight alongside him. I highly recommend this book - you won't be disappointed! I look forward to his next book, "Gambler's Ante"!!
Read more
Helpful
Report abuse

E.D. Erker
5.0 out of 5 stars Mason LeCroix is action packed AWESOME
Reviewed in the United States on July 22, 2019
Verified Purchase
Loved this descriptive, entertaining, unique novel. Lecroix is the guy I want in my corner when things go south. My imagination was spinning as Goetzinger spun the tale of a renegade, futuristic Ranger, Mason LeCroix. Assassins around every corner, action, and humor, coupled with realistic dialogue in a well written book. Can’t wait to read Gamblers Ante next! Great job Goetzinger.
Read more
Helpful
Report abuse

B. Mitchell
4.0 out of 5 stars Flawed, but fun read
Reviewed in the United States on August 23, 2017
Verified Purchase
Despite its flaws, this work reflects much of the author's heart. It is a good read, although there are many grammatical errors. I hope author Goetzinger stays with his craft so we can read many more adventures.
Read more
Helpful
Report abuse

Kym LaFever
5.0 out of 5 stars Amazing
Reviewed in the United States on April 11, 2017
Amazing story that really draws you in. I'm not usually a fan of this genre but I absolutely loved it!!! Highly recommend!
Read more
Helpful
Report abuse

Amazon Customer
5.0 out of 5 stars This author
Reviewed in the United States on April 16, 2017
I have enjoyed reading this book and look forward to more material by this author.
Read more
Helpful
Report abuse
See all reviews
Back to top
Get to Know Us
Make Money with Us
Amazon Payment Products
Let Us Help You
EnglishChoose a language for shopping. United StatesChoose a country/region for shopping.
© 1996-2021, Amazon.com, Inc. or its affiliates