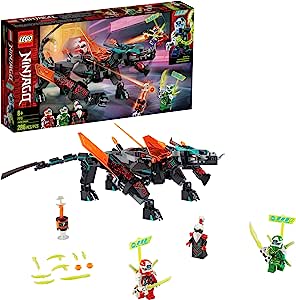 Kids can use their imaginations to role-play stories as their ninja heroes take on Unagami and his dragon in Prime Empire.

Boys and girls aged 8+ can test their building skills before indulging in imaginative role-play.

Fans of LEGO NINJAGO will be thrilled to build this dragon toy and recreate exciting action scenes from the NINJAGO TV series. The dragon mech is a fearsome creature with its posable head and limbs, digi blade wings, and 2 stud shooters. This set features 3 minifigures: Digi Kai, Digi Lloyd and the evil ruler of Prime Empire, Unagami, who becomes the dragon to express his anger. The battles kids can stage with these buildable figures will inspire their imaginations. LEGO NINJAGO toy playsets allow children to dive into an action-packed world of adventure where they can team up with their ninja heroes to take on the forces of evil. NINJAGO fans will be captivated as they play out scenes with these stunning building sets, which include ninja mechs, dragon figures, temples and ninja toys.

4.8 out of 5 stars
4.8 out of 5
1,419 global ratings
How are ratings calculated?
To calculate the overall star rating and percentage breakdown by star, we don’t use a simple average. Instead, our system considers things like how recent a review is and if the reviewer bought the item on Amazon. It also analyzes reviews to verify trustworthiness.

Anubis
5.0 out of 5 stars Great value for your money, a great set!
Reviewed in the United States on February 23, 2020
Verified Purchase
I have owned many LEGO sets, mostly the 2019 Space City wave, but I felt I needed to expand my range of sets.

I really like monsters/dragons, and a cheap $30 dragon was the way to go. It’s also an evil villainous creature too, which is better.

The Empire Dragon is very fleshed out near its front. It’s extremely reminiscent of a traditional Chinese dragon in its face.

It features a ball-jointed neck, with hinged jaw. It also sports a ratched, hinged neck that is limited by its sword-like center horn.

The back features a 80’s, hexagonal windshield for the signature villain, which in this set is the cheapest way to get him. He sits nicely in a 4x4 studded seat on the Empire Dragon’s back.

Towards the back, the tail of the dragon has four segmented ball-joints for a tail, which is thin and skeletal.

The rest of the dragon’s articulation has ratcheted shoulders, and ball-jointed ankles, with a unique technique: skate pieces for claws.

The legs have the same, ratchets for rotation, and ball-jointed feet.

The two titular heros are Avatar Kai and Lloyd. They both have nothing new, all gear which is easily available in other sets. With their health bar attachments and game controller swords, they are equipped to fight the dragon for the coveted Keytana, a seemingly powerful weapon in this ‘game’.

All in all, this is a solid (and cheap!) set to get: A large beast for your collection, the final boss villain, two ninjas in full gear, and a rare colored Keytana.

This set has the best bang for your buck, I highly recommend it.
Read more
5 people found this helpful
Helpful
Report abuse

Drew Hodgson
4.0 out of 5 stars A Lesser Dragon
Reviewed in the United States on March 7, 2020
Verified Purchase
The shoulder cannons of the dragon get in the way of certain poses. The dragon build is not as cool as other dragon builds (including Jay’s from this same series) and the minifigures all come with the Empire Temple of Madness. If you had to pick, I would shell out the extra $$ for the Temple or Jay’s Cyber Dragon.
Read more
8 people found this helpful
Helpful
Report abuse

Chris
5.0 out of 5 stars Excellent support service.
Reviewed in the United States on April 28, 2020
Verified Purchase
My son loves this lego dragon. Had a great time building it, easy enough for a seven year old to do it. One problem we encountered was the set was missing a lego head. Luckily we followed the support from Amazon and Lego is sending use another head replacment. Thanks Amazon and Lego for the assistance.
Read more
4 people found this helpful
Helpful
Report abuse

Irina S
3.0 out of 5 stars Looks good, but breaks easily during play
Reviewed in the United States on February 21, 2020
Verified Purchase
For some reason, the figure keeps breaking at various points as my son is playing with it (much more so than any other piece of Lego we own).maybe the design isn’t too well thought through
Read more
3 people found this helpful
Helpful
Report abuse

Arizona 1951
5.0 out of 5 stars Perfect for my 7 yr. old
Reviewed in the United States on July 13, 2020
Verified Purchase
My grandson is a lego whiz. He has a ton of legos and he uses all of them for his creations. He was thrilled with this dragon building kit. Score for grandma. That is all that matters to me. They are pricey , but in my case it was worth every penny. Arizona 1951
Read more
One person found this helpful
Helpful
Report abuse

kml
5.0 out of 5 stars Great gift for 5-7 year old
Reviewed in the United States on February 16, 2020
Verified Purchase
My son loved receiving this as a gift took about 20 to 30 minutes to put together
Read more
2 people found this helpful
Helpful
Report abuse

Erin M.
5.0 out of 5 stars Grandson loves !!!
Reviewed in the United States on July 18, 2020
Verified Purchase
This was a gift for my grandson and he's really enjoying it.
Read more
2 people found this helpful
Helpful
Report abuse

AJ
4.0 out of 5 stars Good gift, but messy
Reviewed in the United States on March 19, 2020
Verified Purchase
It qas tge perfect gift for my son,but heleft lego pieces everywhere, but it fell about 1 inch off the ground, itbroke into 4 pieces. Overall, good product
Read more
2 people found this helpful
Helpful
Report abuse
See all reviews