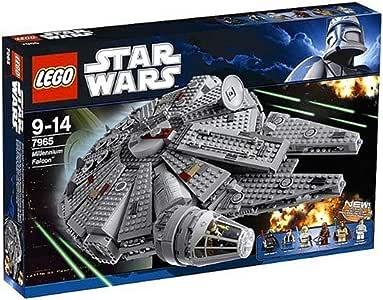 Kids ages 9 to 14 will be happy the old man got the tractor beam out of commission when they blast off with the Millennium Falcon LEGO Star Wars Set. Straight from the Death Star escape scene of Episode IV: A New Hope, this replica of Han Solo's iconic starship is crafted from more than 1,200 LEGO pieces for a detailed, articulating display. With twin flick missiles, rotating laser cannons, and detachable cockpit cover, this Millennium Falcon set's got more than a few surprises left in it.


Six mini-figures from the movie let you recreate your favorite scenes. View larger.

The numerous details on this modified Corellian Engineering Corporation YT-1300 freighter would impress even Luke Skywalker. Measuring more than 15 inches wide and 4 inches tall when completed, this model accurately depicts the famous Millennium Falcon, from its distinctive round shape to its right-hand cylindrical cockpit.

Rotating top- and bottom-mounted quad-laser turrets, detachable cockpit cover, and firing twin flick rockets are just some of the cool features included in this model.

This set includes LEGO mini-figures of Han Solo, Chewbacca, Obi-Wan Kenobi, Luke Skywalker, Princess Leia Organa, and Darth Vader, so you can replay your favorite scenes from the movie.

Place figures outside the ship to have Obi-Wan and Vader duel, or place them inside the opening hull to play chess, hide in the smuggling compartments, or observe Luke's remote training. For enhanced play, the set includes three lightsabers, three blasters, and one crossbow.

Building Your Own Millennium Falcon

With 1,254 LEGO pieces, the Millennium Falcon took more than four hours for our testers to construct. Split between two adult builders, these hours provided a fun time to reminisce about favorite Star Wars moments.

A large percentage of the pieces come in shades of gray, and approaching construction requires a bit of organization and discipline. Detailed step-by-step instructions help ensure that construction is a relatively straightforward process, despite the complexity of the finished model.

As impressive as the finished model may be, our testers noted a few minor oversights worth mentioning. For starters, there are no mini-figures of C-3PO or R2D2 included, making the scene reconstruction feel incomplete. Also, only Han Solo and Chewbacca are capable of fitting in the cockpit. However, considering the amount of overall detail included in this model, any Star Wars fan would be delighted to proudly put it on display.

4.7 out of 5 stars
4.7 out of 5
557 customer ratings
How does Amazon calculate star ratings?
Amazon calculates a product’s star ratings based on a machine learned model instead of a raw data average. The model takes into account factors including the age of a rating, whether the ratings are from verified purchasers, and factors that establish reviewer trustworthiness.

S. Mc
5.0 out of 5 stars Great lego kit for the kid (or adult) who loves to build Legos and likes Star Wars.
Reviewed in the United States on November 4, 2013
Verified Purchase
I had to give this kit five stars. Yes, it's expensive, but it's the Millennium Falcon, in Lego. It's 1254 pieces! And it includes several mini figures! I bought this for my 8yr old son, who has been dreaming of this kit for most of the year. He just finished building it off and on for the past 2.5 days. He was a little discouraged at first, because he was overwhelmed at the scale of the build. I just encouraged him a little, and settled him down to focus. He rocked the whole build by himself, showing me his progress along the way. Since completing it, he hasn't stopped smiling. Worth. Every. Penny.
Read more

padj650
5.0 out of 5 stars Interior makes this set a home run
Reviewed in the United States on November 20, 2014
Verified Purchase
As a collector of the new line of Star Wars legos, I have to say that this is clearly the centerpiece of my collection along with the 9493 X-Wing (both are not from this year's release but I group them in the new line). So far I have built the 75054 AT-AT, 75055 Imperial Star Destroyer, 75050 B-Wing, 75049 Snowspeeder and some smaller sets but this takes the cake in terms of fun and details.

Build: It was pretty straightforward, with a lot of technic pieces forming the bottom frame and then repetitive building for the top covers. I usually build sets pretty quickly (AT-AT took 2 hours) but I went a little slower on this one, taking about 3 hours to finish it all. There are painted panels for computers but also stickers for some of the pieces on the outside, and while I'm not a huge fan of decals they look decent enough on the finished product.

Playbility: This is a lot more fun to play with than sets of similar price range like the AT-AT and the Star Destroyer. The top panels fold out nicely to reveal the interior and aren't too loose to flop if you play with it upside down. The main body features: 1) 2 beds, 2) the training remote Luke uses in A New Hope; 3) sitting area with the board game; 4) a center computer console; 5) stowaway compartment; 6) a lowering walkway (?); and 7) the top/bottom quad cannons with seats for gunners that slides out the top. The cockpit can fit both Han and Chewie (with Chewie sitting slightly behind Han). The landing gear won't fold in or slide up but this will probably be on a surface most of the time, and you can take them off if you really want to. You can easily fit all of the minifigures that came with the set plus more to recreate scenes from episode 4, or make up your own scenes. While the AT-AT just has an empty space to fit Snowtroopers and the Star Destroyer has a few panels and standing space, this set allows your figures to be in the context of the movie and to actually be interacting with the ship itself.

Minifigures: Of course it comes with Luke, Leia, Obi-Wan, Han, Chewie, and Darth Vader. As with the other reviewers, I would've liked to see R2 and C-3PO included given the hefty price tag, but they can be purchased individually or via Droid Escape set. The details on the figures are great and have the same level of accuracy as the newest figures from this year.

Love this set, you will not regret it if you are an adult collector that doesn't mind spending in the $50~$200 range for a fun kit.

Antonio Bartalini
4.0 out of 5 stars How does one review this thing?
Reviewed in the United States on June 24, 2014
Verified Purchase
Well, this is a Lego, and frankly, I am not sure how one could go about rating it...
On a fun scale, assembling it, and playing with it is high. I am an adult who bought this for my girlfriend who is a LEGO and Star Wars nut. So naturally she loved it. We ended up building this all day and finishing it within an afternoon. Building it is not hard, but I see LEGO still has not found some easy way of differentiating the bigger pieces apart (the only way to tell the difference between say a 8x14 plate and a 10x16 plate is to count the individual studs on each plate) in the instruction manual. We enjoyed ourselves a lot and had a great time. Now, I am a star Wars nut. I love realism, and this, like many other LEGO products is not build for realism, but for play. I can't help but notice that the scale is off on the ship, there are some key locations on it from the movies that are missing (no re-enacting the kissing scene between Han and Leia on this from Ep. 5), and for some reason they are missing the R2-D2 and C-3PO characters. The set appears to be based off of the Ep. 4 version of the Millennium Falcon, because the two guns can be manned by two minifigs, there is the chessboard set from the movie, the smuggling compartments, and that little trainer that Luke uses with Ben Kenobi, but no dynamic droid duo. Also, the cockpit does not hold four minifigs, like in the movies. I believe it maxes out at two, I never checked that out. Other than those minor, nitpicky little things, this set is a blast. And I got it cheaper here, than I could have at the Lego store, Lego.com, and Walmart. Go Amazon!

Amazon Customer
4.0 out of 5 stars Excellent for Lego Lover! Maybe not so much for playful child
Reviewed in the United States on August 6, 2013
Verified Purchase
As a repeat of the title the set was an excellent build for the lego lover but I would not label it as a child rough house toy.
For the Lego Lover:
The set is enormous!! The diameter is bigger than a foot! However with that size it does take up a lot of space. The set also comes with multiple figurines which was suprising. The set comes with two booklets and multiple labeled bags (WARNING: take heed and DO NOT open all the bags at once). The set takes multiple hours to complete (which I like) Some of the little details will suprise and you'll fascinating. Overall for the price and the size of the set and the time it takes to build it is well worth the money

For the playful child: The set comes with many pieces and if you dont have the patience the instructions can be frustrating. The whole set is somewhat fragile and occasionally pieces do come off. However the designers have left room for kids to use their creativity when playing with the set. The landing gear are fixed and dont move which could possibly be a bummer. Overall the set is rather fragile for play and if you decide to take it apart and dont save the instructions the set will never get back together again.

Rick V
5.0 out of 5 stars How to keep your kid busy for 8-10 hours?
Reviewed in the United States on December 30, 2014
Verified Purchase
How to keep your kid busy for 8-10 hours? Buy this and refuse to help them build it. Yes, I'm a mean dad, not mean that I paid north of $100 for some legos, but I simply lack the attention span and patience to assemble something of this magnitude or is it that I dont want to do that much work without being paid for it. Whatever the case is, my little dude went to work on this thing at 8am the day after Christmas and finished at 6pm that evening. He got it all assembled and guess what? He started out thinking he couldnt do it alone, accomplished the mission and felt a great deal of self satisfaction when he was done. I was quite impressed!
Read more
3 people found this helpful
Helpful
Comment Report abuse
See all reviews from the United States

Robert
5.0 out of 5 stars The Falcon... Nuff Said
Reviewed in Canada on September 19, 2019
Verified Purchase
See the headline.
Read more
Helpful
Sending feedback...
Thank you for your feedback.
Sorry, we failed to record your vote. Please try again
Report abuse