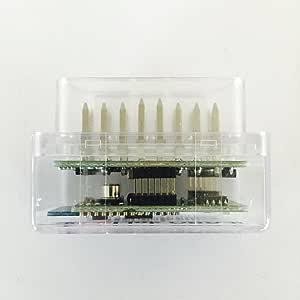 4.2 out of 5 stars
4.2 out of 5
544 global ratings
How are ratings calculated?
To calculate the overall star rating and percentage breakdown by star, we don’t use a simple average. Instead, our system considers things like how recent a review is and if the reviewer bought the item on Amazon. It also analyzes reviews to verify trustworthiness.

db
5.0 out of 5 stars great OBD2/bluetooth device, works with iPhone/iOS
Reviewed in the United States on April 27, 2017
Verified Purchase
I've been using this for nine months so far, and it works great!

I use this on an iPhone. You do need to purchase software for this, but it should work with many OBD2 apps. I use OBD Fusion ($10), and it works nicely, letting you customize your app dashboard, read and clear codes, etc. This app has a fast-response mode, which drains your phone battery faster, but gives you even faster than the standard speed. (Standard is probably one update per second.) This device has no problem keeping up.

This device is low-profile, and of course doesn't have any wires to plug in -- you just plug in the device itself, and it gets power from the OBD2 port. (All cars in the U.S. since I think 1996 have to have standard OBD2 ports.)

I use this on a 1996 Lincoln Mark VIII and a 2001 Jeep Grand Cherokee. No problems switching between vehicles.

My only disappointment is that I was hoping there was a power switch, or that it would automatically shut off after shutting off the car, so I could leave it plugged in without draining the battery. But it stays on the whole time -- you can't connect when the key isn't in the "run" position, but it still gets at least enough power to keep flashing the LEDs. I've accidentally left it plugged in a couple times, and it's not enough draw to kill the battery overnight, but I still wouldn't want to leave it plugged in all the time. (Obviously, this was not a big enough problem for me to lower my rating.)

Oh, and speaking of the LEDs, they're easy to see when you're looking at the device, but they're not distracting for me when driving, because the OBD2 ports on both my vehicles are under the dash, so you can't see the lights at all when driving, even in your peripheral vision. I suspect most cars are like that, but if you can directly see your OBD2 port when driving, you might end up putting electrical tape or something over this to hide the lights.

David and Diana
5.0 out of 5 stars Works great with LEAF Spy or LEAF Spy Pro app
Reviewed in the United States on August 13, 2019
Verified Purchase
Unlike the cheap model I bought before and returned this one actually worked! This is the OBD2 brand/model recommended by the guy that wrote the software for LEAF Spy and LEAF Spy Pro and it worked right out of the box with my Android 7.0 Moto G4 phone with both my 2013 and 2019 Nissan LEAF. Automatically paired with the BlueTooth on the phone. Low profile means it won't get in the way of your legs. Since it draws so very little power you can leave it plugged in and not worry about draining the 12V battery.

Note that the orientation of the OBD socket in the 2018/19 LEAF is 180 degrees different than the older LEAF models.

No complaints so far :-)

P. Sullivan
5.0 out of 5 stars Really, no setup, at all, it just works, that's marvelous!!
Reviewed in the United States on December 13, 2016
Verified Purchase
Well, I have been on the hunt for a dependable OBDII unit for quite a while. I used to drive a Prius, now I drive an all electric LEAF. I love both cars, and to that end I had software that would read the OBDII port and give back useful systems info. Now that I use the LEAF, I rely on that data more than ever. The last 4 OBDII units, all WiFi, were all returned, but with the LELink, I think, sure hope, that I found a winner. First, it's Blutooth, I will try it, WOW, it started communicating with the phone even before I picked it up, an Iphone 6s Plus, really, no setup, at all, it just works, that's marvelous!!. To top it off, I am in my office at home, 30 yards from my car, and it's still currently in communication with the car during a battery charge sequence. WOW, I love this unit, it really works quite well!!
If anything changes, I will be back to amend this review, but I sure hope I don't have too, the LELink just kicks butt!!
Ya gotta just ... Love it!

Braydon Webb
5.0 out of 5 stars Great for iPhone users who don't want a WiFi adapter!
Reviewed in the United States on July 27, 2016
Verified Purchase
I got this OBD2 adapter because I wanted something for my iPhone that I could connect to without losing internet functionality, and as many of you many know, the WiFi versions of this device require you to give up internet connectivity. Luckily, I finally found one that would work via Bluetooth LE, so that I wouldn't be giving up anything. So, with that being said, this device works perfectly! The only possible downside with this is the fact that the only two apps that I have found to work with this device are Engine Link, and OBD Fusion. But luckily, neither app is particularly bad, although Engine Link does not have as nice of a layout as OBD Fusion does. But oh well! Great product still.
Read more
10 people found this helpful
Helpful
Comment Report abuse

Scott Briggs
5.0 out of 5 stars Low profile, easy connection.
Reviewed in the United States on April 8, 2017
Verified Purchase
This OBDII adapter is fantastic! I use it with my iPhone and it connects without any setup to the LeafSpy Pro app when connected to my Nissan Leaf & Engine Link OBDII vehicle monitoring app when connected to my Subaru Forester. Very low profile. I've broken off several of the bigger adapters getting in and out of cars but not this one. The adapter doesn't show up in the bluetooth list but I think that's by design.

To be clear, I gave this adapter 5 stars for two reasons. 1. I had a problem with the first one that was shipped to me. It worked fine for a few days but then stopped. I contacted the support email address that came with it and they took care of getting my adapter replaced. The return process was easy and the replacement adapter arrived quickly. 2. It works flawlessly when I plug it to the cars.

I've owned cheaper adapters, both wifi and bluetooth, and I've almost always had an issue with the size or functionality. I couldn't be happier.

Amazon Customer
4.0 out of 5 stars Works as expected
Reviewed in the United Kingdom on June 18, 2019
Verified Purchase
Bought this to go with the LeafSpy app, I recently purchased a Leaf. I had previously bought a cheap one and could not get it to connect to any app. This is the one LeafSpy recommends and I was pleasantly surprised that I didn't even have to configure anything, just plugged it in, started the app and it connected all by itself. Everything works well so the item is doing what it's supposed to.
Read more
6 people found this helpful
Report abuse

I. Black
4.0 out of 5 stars Needs phone location turned on for Android
Reviewed in the United Kingdom on June 11, 2020
Verified Purchase
I thought I'd have to return this as it wasn't begin picked up by Leaf Spy on a Lenovo tablet or Nokia 2 phone. The phone could see it when Bluetooth was on but Leaf Spy and the LELinkConfig app could not.

I was close to returning it when I thankfully noticed a review on Amazon.com where turning on location for the device (not just allowing for the app) was mentioned and now it works! I'm so happy to see those graphs on Leaf Spy.

It seems needing phone location on for Bluetooth LE is a thing with Android. There is a detailed article about it here: https://www.polidea.com/blog/a-curious-relationship-android-ble-and-location/

I am only giving the product 4 stars because the two boards on my device are not fully parallel so not great manufacturing. I thought initially this might have been the issue (a faulty device) but thankfully it was not. Hopefully it doesn't manifest itself at a later stage.

James Bee
5.0 out of 5 stars Great - works with Leaf Spy
Reviewed in the United Kingdom on May 18, 2019
Verified Purchase
If you're looking for an OBDII for Leaf Spy this works! The others I got didn't and a lot of people have the same problem. Easy to setup and small enough to not need extension cables to secrete it in the dash.
Read more
6 people found this helpful
Report abuse

E. Biggs
5.0 out of 5 stars Stays linked to Bluetooth and no nasty gremlins
Reviewed in the United Kingdom on November 28, 2019
Verified Purchase
Very pleased. Can't fault it. I use it with a 2015 ENV200 and leafspy pro and it works perfectly. No error symbols, no flat batteries, hooks up to Bluetooth on my Android OnePlus3 every time and stays hooked. No issues at all. The box is quite discrete and I leav it in the glovebox most of the time anyway unless I want to test things.
Read more
2 people found this helpful
Report abuse

Colin Main
5.0 out of 5 stars Just the thing
Reviewed in the United Kingdom on April 18, 2019
Verified Purchase
Allows me to make some changes to my 2018 Nissan Leaf (when used with Leafspy), such as lock doors when putting in drive and turning off the annoying noise permanently.
Read more
4 people found this helpful
Report abuse
See all reviews
Pages with related products. See and discover other items: load bars, car diagnostics, dtc scanner live data, bluetooth auto, transmission temperature, scan tool