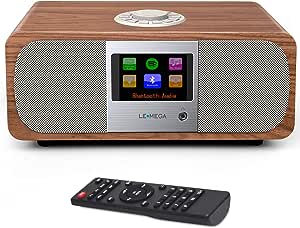 Visit the LEMEGA Store
3.9 out of 5 stars 48 ratings
| 60 answered questions
Currently unavailable.
We don't know when or if this item will be back in stock.

Fine-tuned acoustics enclosure featured with two front-facing 2.5” full range speakers and a low bass 4” down-facing woofer, 2.1 stereo speaker system configuration producing powerful sound with free-distortion that fills any space in your home. Go to the menu to access My EQ setting, you can set the music as POP/Classic/Jazz/Rock/Normal stylish while you are listening the music, enjoy the different music taste.

3.9 out of 5 stars
3.9 out of 5
48 global ratings
How are ratings calculated?
To calculate the overall star rating and percentage breakdown by star, we don’t use a simple average. Instead, our system considers things like how recent a review is and if the reviewer bought the item on Amazon. It also analyzes reviews to verify trustworthiness.
Top reviews

dvan@VAB
5.0 out of 5 stars A High Quality Sound Machine
Reviewed in the United States on February 11, 2018
Verified Purchase
This radio, which is an inadequate term for the M3+, exudes quality. It is a great looking unit. Easy to set up. Great FM tuner and connected to Wi-Fi easily for internet radio. Has excellent sound with a bunch of preset equalizer settings and one you can customize yourself, although all you can adjust are bass, treble, and loudness. A nice little display, which is can be dimmed when the M3+ is turned on and which provides plenty of song info and a menu that is pretty easy to navigate. Also includes a pretty handy remote control and a pair of white cotton gloves, the use of which I had no need of. Also has the ability to update its firmware for future changes. The only thing I would change is, since I use it in a bedroom, I would like to be able to dim or turn off the standby display. I prefer a dark room when sleeping. Otherwise, an excellent job by LeMega.
03/08 Update: Regarding the standby display dimming, I figured out that the dimming doesn't occur unless you initiate the Timeout feature in the Backlight menu, but it does affect both the ON and STANDBY displays. Still love the unit.

Amazon Customer
5.0 out of 5 stars Great Sound and Options
Reviewed in the United States on August 7, 2019
Verified PurchaseEarly Reviewer Rewards(What's this?)
The last internet radio I had was a tablet in a box with speakers, and very clumsy to use. This internet radio is not like that! And it looks like a retro radio (which is great!), but has all the options of a digital device (thousands of online music channels from around the world, local radio, FM radio, Spotify and Bluetooth for streaming your own music like Amazon Music or Calm Radio). Additionally, it has a USB port for connecting an MP3 player or charging a phone, for example. It comes with a remote, but you can also use an app from your phone, which adds convenience when searching for or saving new music stations. The stereo sound is really great and includes a third speaker under the radio for added sound effect. I have been very pleased with this purchase, and even convinced a friend to purchase one, as well. I don't keep a computer in my bedroom, so I love having an actual radio with thousands of music options to listen to at night or during the day. So far, no complaints regarding this purchase.
Read more
13 people found this helpful
Helpful
Report abuse

Will
5.0 out of 5 stars M3+ Hi Fi Music System Excellent Bose Replacement or Alternative.
Reviewed in the United States on December 19, 2019
Verified PurchaseEarly Reviewer Rewards(What's this?)
I have had the M3 for about two months now and have to say it is a fine radio. The sound is well balanced. Music, in my opinion, is reproduced very well, as good as if not better than, the Bose it replaced. It is generally intuitive to use but not as much as the 20-year-old Bose radio, with the top mounted buttons, it replaced, or the simple cheap clock radios typically found in hotel rooms. But then again it does more than most clock radios. To fully utilize the advanced features, you do need to go through menus. While the Bose waveguide radios are fine products, they are overpriced, the M3 is a better value unless you need an AM tuner. The FM tuner is absolutely stellar. I’d say it is the best FM tuner in the house. It picks up weak FM stations easily just on its supplied antenna. It is on par with the Marantz PMD800 tuner. And surpasses the tuner in the Denon AVR3312. And that is with the Marantz, Denon, and especially the Bose using an external attic mounted antenna. The telescoping antenna is attached via a recessed F-connector, and is supposed to be removable, but you would need a deep socket (you have to fit the antenna tip through the square hole so you can’t use the ratchet to unscrew it) to do so. I tried to remove it, but it was so tight I just left it in place for fear of breaking something. If I would have been successful, I would have to use a cable that has a push-on F-connector since there is no way you can get your fingers on the connector to screw a threaded one on. So, rather than pointing the antenna up, which didn’t look nice, I pointed it down, behind the dresser, and it still receives the distant station I like to listen to. I like the fact it can display album art, RDS information, along with other information.
It is not perfect, there is room for improvement and so it gets just over a four-and-a-half-star rating. Perhaps the most annoying is the fact you must turn on the radio, to any source, in order to set or change the alarm times. You can, however, turn the alarms on or off without turning the radio on. I also would like to able to set three alarm times instead of just two and /or be able to set it for a specific day of the weekend if not for a specific day of the week. Setting the alarm times on the Bose was much easier, you need to go through menus to set the alarm times on this, and don’t forget to scroll to “save” and press “OK”. Since this radio has two alarm time memories, it only loses a ¼ star due to this aspect of the radio operations.
The other almost ¼ star loss is due to the size and the nomenclature of the top mounted buttons. The nomenclature is just plain hard to see in a dimly lit bedroom, which is where clock radios normally reside. I also would have preferred the standby button, to have been marked On/Off instead of “STB”. Even though it may not be technically correct, it would make the standby button more easily identifiable, since it is next to the “source button labeled “SRC”. The circular arrangement of the buttons adds to this issue, since you can’t pick “say, third from the left” While this looks nice, I would have preferred they’d been arranged in a row, or rows. And yes, this is easy to remedy with a marking pen or a sticker of some sort.
FWIW, this radio is powered by 12 volts DC so it has a wall wart plug. This can be a plus or a minus, depending on the application. It would be perfect for an RV, boat, or off grid home, as it could be powered directly from a 12 Volt DC source.
The Undok app works well to control the radio, but it cannot be used to set the alarm times. You must go to the radio, or its supplied remote for that.
The streaming works well from the Nas. But the DAB mode is useless in the USA. I would rather have had an AM section in the tuner as opposed to the DAB mode, as there are a lot of AM radio stations here. However, since most radio stations both AM and FM have websites you can stream from, it does lessen the need for an AM tuner. No reduction of stars here since this was known up front.
If you are looking for a quality clock radio, look no further than this one. However, if you need a clock radio with an AM tuner you will have to look elsewhere. Beware that a couple of these higher end radios, that compete with this one, do not have the means to retain the time and alarm settings in the event the power drops out momentarily, which was surprising to me since all the cheapie hotel style radios do, as does this one and my old Bose did. So, all in all this gets rounded up to 5 stars.

J. X. Mooncalf
5.0 out of 5 stars Lemega M3+ is a great device and lots of fun to use
Reviewed in the United States on September 3, 2019
Verified PurchaseEarly Reviewer Rewards(What's this?)
I got the LeMega M3+ pretty much as an extravagant birthday gift to self; after all, a computer can pull in internet radio stations. Yet I have discovered I really like this thing more than expected.

A large number of radio stations are available, organized by genre or location, and you can search easily for ones you want. It's easy to save presets for the ones you like, and you can add new ones that aren't there - - as long as they aren't "Flash Player" stations (disappointed that Talk City 91FM in Trinidad can't play on it).

The sound is great, and I like that there is both a headphone jack and a Line Out (from which you can record from it while still listening and changing the listening volume).

The radio also receives FM; the tuner picks up a good number of stations. You can play things using Bluetooth or the Aux In jack (I have a computer connected to that to listen to stuff played on it), and the radio will play Spotify from a paid Spotify account. There are buttons on top of it to select your source, presets, and options, and there is also a very good remote that makes it easily to select source (FM, Internet Radio, Aux In, etc.) or a preset for a station, or to "thumb" through the large variety of stations on the internet that the radio can receive.

It's certainly a good piece of equipment for listening, and it's kind of fun to look through all the stations on it and just try them out.
Read more
6 people found this helpful
Helpful
Report abuse

Page 1 of 1 Start overPage 1 of 1
Previous page
Next page
Pages with related products. See and discover other items: Explore WiFi radios for homes