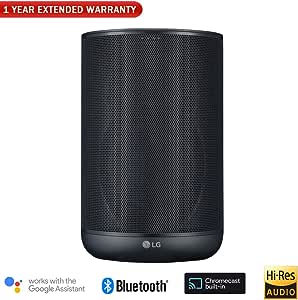 Visit the LG Store
3.6 out of 5 stars 2 ratings
Currently unavailable.
We don't know when or if this item will be back in stock.

3.6 out of 5 stars
3.6 out of 5
2 global ratings
How are ratings calculated?
To calculate the overall star rating and percentage breakdown by star, we don’t use a simple average. Instead, our system considers things like how recent a review is and if the reviewer bought the item on Amazon. It also analyzes reviews to verify trustworthiness.
Top reviews

MODsquad
5.0 out of 5 stars Use Google Home to set up
Reviewed in the United States on December 25, 2018
Verified Purchase
I like this speaker for quick answers to questions because it uses Google Assistant features. What I dislike is the sound quality is somewhat tinny sounding.
Read more
Helpful
Comment Report abuse

I was pleased when I first received the product, 3 of them to be exact. In my opinion the design and the size of the speaker is actually the best out of all similar products that I have looked at, and the quality is perfect as well. The speaker also has a good audio - not perfect, but for this price and size it's actually excellent. So all in all, the hardware is probably the best that is out there in this price range. The promised features are also decent, but that's where everything then goes wrong. The promises are not kept.

This speaker is supposed to have multiroom capability over WiFi, and it does - or it would have if Google woke up in a good mood today and decided to allow for it. (Or if LG decided to ensure the functionality of their own product instead of letting Google screw them.) Problem is that Google doesn't feel like this LG speaker should be allowed to have multiroom functionality so it doesn't. LG refuses to write their own software for this product to bypass Google's broken software, and Google refuses to help with this LG speaker because they have their own speakers. In the end this speaker doesn't do what it's supposed to do, and there's just no way around that.

The only way this speaker is supposed to work is through the Google Home App because LG hasn't written their own operative software for it at all. The speaker groups created in the Google Home App just don't work though (it only plays through one of the speakers), and there is no way to fix it with Google refusing to help and LG just pointing to Google. This makes these speakers not worth half the price for someone who is looking for multiroom audio. Even now I'm casting to the three speakers simultaneously through my WiFi network without any problems, only I have to use 3 different android music apps to cast to each of them separately (doesn't matter because I'm casting dishwasher sound, but music can't be played simultaneously). The hardware for this functionality is working, there's just no software to actually use it properly.

I'm returning these tomorrow and probably never touching anything by LG again, and certainly not anything that can't be operated without Google in the middle deciding if they're going to allow it or not. Really I don't want anything by Google anyway (certainly not after this), but I guess if Chromecast Built-In or Google Assistant is just a redundant function in a product, I'm going to have to tolerate it, but it has to be redundant because otherwise you're buying expensive bricks and paperweights.

You went full Google. Never go full Google. At least write your own alternative software, so when Google refuses to help with their software because it isn't their hardware - the device can still be used for multiroom audio and does not have to be returned. I really liked the design of this product, and the audio performance is great for this price and size, sadly I have to give up this great hardware because you went full Google. I won't be buying anything from anyone anymore unless there is at least an alternative way to use all the basic functions - such as multiroom audio - without Google entering the picture in any way apart from maybe Android (for now). This was the best looking speaker for a great price and with good audio performance, too bad you ruined it by trusting Google and being unwilling to write your own software solution so that the product can even be used. I want to make sure you understand the problem here, this device is near equivalent to a brick because the Google software doesn't work and neither one of you want to do anything to make this basic functionality work! The device doesn't do what it's supposed to do! Would have been great if it did.