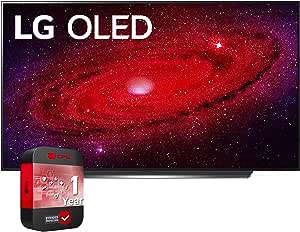 Visit the LG Store
4.7 out of 5 stars 96 ratings
| 21 answered questions
Available at a lower price from other sellers that may not offer free Prime shipping.

Only OLED pixels emit their own light, allowing for perfect black, intense color and stunning picture. Other TVs pale in comparison. There's LG OLED, then there's everything else.

See how OLED redefines picture quality Once you’ve seen LG OLED TV with your own eyes, you'll understand. It’s stunning picture that redefines quality. Millions of OLED pixels emit their own light independently and can be completely turned off. This unveils perfect black, over a billion rich colors and infinite contrast. From the gridiron to the iron throne, no detail goes unseen.

AI processor directs your 4K picture behind the scenes Everything you see and hear is automatically made better, clearer, smoother, and more dynamic with our α9 Gen 3 AI Processor 4K. You don’t have to do a thing. Our most advanced 4K processor does it for you with AI Picture Pro, AI Sound Pro, AI 4K Upscaling*, and the ability to help your TV to evolve over time.

The leading name in cinematic sight and sound

Dolby Vision IQ automatically adjusts picture settings depending on ambient lighting conditions and content genres. Dolby Atmos puts you in the middle of the action with multi-dimensional surround sound that seems to flow all around you.

See everything you've been missing on the all-new LG OLED TV. It has a wide breadth of color that will truly take your breath away.

LG ThinQ AI TVs are the only TVs with the Google Assistant and Alexa built-in. LG ThinQ fully integrates the voice assistants you already use. No need to buy a separate device. Convenience and connected home control are at your command, making it easy to control other smart devices and LG smart products.

At Beach Camera we pride ourselves on providing the best TV Bundles at the best prices. All of the items we include in our bundles are brand new and of the highest quality. They provide you with everything you need to take your Smart TV to the next level!

4.7 out of 5 stars
4.7 out of 5
96 global ratings
How are ratings calculated?
To calculate the overall star rating and percentage breakdown by star, we don’t use a simple average. Instead, our system considers things like how recent a review is and if the reviewer bought the item on Amazon. It also analyzes reviews to verify trustworthiness.

Ron Michelson
5.0 out of 5 stars Great TV
Reviewed in the United States on August 1, 2020
Size: 77 InchVerified PurchaseEarly Reviewer Rewards(What's this?)
What an amazing TV. The picture is so good it appears to be 3D. Was plug and play into my 15 year old home theater system. It's heavy so you will need two people to set it up.
Read more
15 people found this helpful
Helpful
Report abuse

Bones
4.0 out of 5 stars Great picture, lousy software
Reviewed in the United States on October 9, 2020
Size: 55 InchVerified PurchaseEarly Reviewer Rewards(What's this?)
I wanted to like this tv a lot more but the software isn't that great. I've noticed that if I shut it down without exiting Netflix it has a lot of issues when I restart the TV later. I end up having to shut the tv off and turn it back on a couple/few times. To get it working again. It's rather disappointing to have paid for such an expensive TV to get such lousy software.
Read more
13 people found this helpful
Helpful
Report abuse

J. McMahon
5.0 out of 5 stars Best TV I’ve ever owned
Reviewed in the United States on October 25, 2020
Size: 65 InchVerified Purchase
With TV prices dropping precipitously, this now seems like a premium priced satchel, even though it’s more expensive than middling TV’s I’ve bought in the past.

Colors and blacks are beautiful. Input lag is virtually nonexistent for gaming. The smoothing, which I normally hate and turn off, actually makes games almost look like they’re running at 60hz, which is very cool.

This is a pricey TV, but worth every penny if you want to be ready for PS5 and Xbox Series X, or if you want an absolutely amazing gaming monitor.

And of course, it looks great for movies and shows, especially with Dolby Vision content.

I like that I can turn my TV on and off with Siri.

ferricoxide
5.0 out of 5 stars The picture is everything they say it is
Reviewed in the United States on December 11, 2020
Size: 65 InchVerified Purchase
I bought this TV because, with all of the video-conference calls - particularly with text-heavy presentations - my 7yo Sharp Aquos 55" TV just wasn't up to the task. This TV gives me the same kind of text-readability at a 15' distance that my OLED laptop gives me at arms-length distance. The colors are bright - almost super-saturated when watching things like Planet Earth. The gradients are very smooth. The boundaries crisp. And the blacks are VERY black. Plus, the picture is bright and clear even when you're standing almost along the plane of the screen.

The automatic picture-mode detection is on point: sports look great; movies look great; video games look great. Each time your program-mode changes - either because you've changed inputs or the football game youre watching goes to commercial, the little mode-change alert thing pops up to let you know it's doing its thing. It's just seamless and each thing looks "right" after the change. Bonus, you don't end up with movies looking like 70s soap operas because you forgot to take the TV out sports-mode.

The screen is stoopid thin (pictured). This is the third flatscreen I've bought in the span of about 15 years. Each has been thinner and with far smaller bezel than its predecessor. I don't think you could make thinner and have it be structurally-sound (youd need to flat-mount it to a wall so the wall could support if you went thinner).

Previously, I've never bothered with smart TVs' smart features - especially for content/apps. They were always kind of "iffy" – usually of far lower user-experience quality than what Roku or other streaming devices provide. I'm actually using the webOS-based apps, though, because the (very sexy) remote the TV comes with is far better than those that came with any of my external streaming devices. It's gonna suck when this TV ages out of it software-updates lifecycle (speaking of which, when I first turned it on, it did an update; not even a week later, it wanted another: at least for now, it looks like LG is being serious about aggressively addressing bugs).

Only two negatives worth mentioning:
* The integration with other smart devices is pretty weak. While the TV sees all my ligtbulbs, it can't seem to see any of my wireless speakers. So, while it's able to use ARC to integrate with my JBL soundbar, it's not able to either Chromecast or BlueTooth to my JBL bookshelf speakers (so, no rear-channel sound). While they advertise Google Home compatibility, that integration is pretty buggy. It seems like they REALLY want you to use Alexa (indeed, it shows up in big, annoying "try me" box on the app-selection screen and you can't remove it – even finding the Google Home option to enable it was kind of a chore)
* If you're planning to watch a lot of legacy OTA/cable content – which mostly max out at 1080i – this TV makes it especially obvious that such programming is decidedly NOT being transmitted at 4K (either it doesn't do upscaling or its upscaling engine doesn't cope well with 1080i content). The UHD programming on NetFlix, VUDU, Amazon Prime Video, etc. provide a VERY stark contrast to OTA TV type content.

I would probably have given it 5 stars on the value - especially given the nearly $500 discount on price vice what Best Buy had been asking for it before the black friday sales started – but I realize not a lot of people would think that over $2100 is reasonable for a TV when Samsung is selling similar-sized TVs for less than half that amount (I looked at the Samsungs: the QLEDs' pictures weren't nearly as good).

Installation was a bit daunting given the thinness of the TV. If you're not a mounting-expert, hire one. It's well worth the money to do so.
Read more

JOHN R. TRAHAN
3.0 out of 5 stars picture quality
Reviewed in the United States on October 19, 2020
Size: 65 InchVerified Purchase
as of right now having an issue with the picture "SOME TIMES" trying to get a handle on it
Read more
7 people found this helpful
Helpful
Report abuse

Colléen
5.0 out of 5 stars Heat and awgul
Reviewed in the United States on August 22, 2020
Size: 55 InchVerified PurchaseEarly Reviewer Rewards(What's this?)
LG OLED TV is great. Instructions for setting up stand are worst then awful.
Read more
7 people found this helpful
Helpful
Report abuse

sneeden
4.0 out of 5 stars Bought for PS5. Very satisfied with hardware, but...
Reviewed in the United States on December 28, 2020
Size: 65 InchVerified Purchase
I am very satisfied with the hardare. Great picture, great sound (considering the package). Easy to mount. Looks great for gaming.

Beware that you are opted in on all of the tracking/ad stuff by default. You can turn it off but... eww gross. No way I would use any of the smart home features built into this thing.

I wish the panel could get a tad brighter especially for daytime use (such as with all OLED panels).
Read more
2 people found this helpful
Helpful
Report abuse

JHawk88
5.0 out of 5 stars Great purchase. Awesome Television
Reviewed in the United States on January 12, 2021
Size: 77 InchVerified PurchaseEarly Reviewer Rewards(What's this?)
This TV is absolutely amazing. I love the picture quality. But it's the webOS that does it. The ease and simplicity are such nice features. Most of the big time streaming apps stream in 4K and HDR. In my research for TVs, I've read that OLED has brightness issues, but this thing gets plenty bright. If your room is out in the sun, then maybe you've got a problem. Other item of note, I grew so used to the backlight panels that I used the TV backlight as a sort of nightlight at times. This thing, since the pixels turn completely off, emits no light at true black. So no nightlight. Lol
Read more
One person found this helpful
Helpful
Report abuse
See all reviews