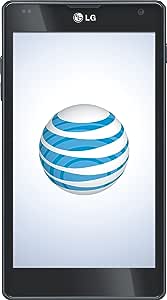 Grade D - Very heavy signs of use, such as deep scratches and dents, works perfect, clean ESN, phone & Battery only - no charger

With quad-core power and next generation features, he LG Optimus G gives you the power to live without boundaries. Multitask like never before with UX features like QSlide, QuickMemo, and Dual Screen Dual Play. Play as hard as you want with a 1.5 GHz power-optimized quad-core processor and advanced graphics or watch HD movies on the 4.7-inch true-color IPS Plus display without sacrificing battery life.


What's in the Box

By the end of 2011, AT&T plans to launch its 4G LTE network in 15 major metropolitan areas, covering at least 70 million Americans. Coverage will continue to expand in the next few years and is planned to be largely complete by the end of 2013.

And when combined with 4G HSPA+ technology, AT&T is capable of delivering a quicker, more consistent mobile broadband experience than ever before. AT&T has deployed HSPA+ to virtually 100 percent of its mobile broadband network, which enables 4G speeds when combined with enhanced backhaul (via Ethernet or fiber). Backhaul is one of the major pieces of a telecommunications network. Think of it as the limbs connecting AT&T's cell towers with AT&T's backbone network that provides access to the Internet.

3.6 out of 5 stars
3.6 out of 5
65 global ratings
How are ratings calculated?
To calculate the overall star rating and percentage breakdown by star, we don’t use a simple average. Instead, our system considers things like how recent a review is and if the reviewer bought the item on Amazon. It also analyzes reviews to verify trustworthiness.
Top reviews

tajjej
1.0 out of 5 stars Nice idea, poor execution
Reviewed in the United States on February 9, 2014
Verified Purchase
I bought this at the end of September, 2013. It's now early February, 2014. The first phone I received would not hold the microSIM card in place. The replacement held the SIM, but after about four months, it developed a weird fault. What looked like a crack or scratch appeared across the middle of the screen. The glass was NOT craked/scratched.

The crack/scratch was in fact a fault with the "touch" coating on the glass. That made it impossible for any part of the lower half of the screen to respond to a touch. That happens to be where the "Home" and "Back" keys are. Not to mention where most "OK/Cancel" buttons are. That rendered the phone unusable.

The phone has never been dropped. It has been cared for as well as the other two android phones I have owned before. And none of them has been damaged.

When I took it to a local outlet to see if anything might be done to fix it. I was told that this LG phone had given them problems, too. They were not fond of them at all.

This phone cost me about $40-50 on a deal. Now with the $160 replacement cost (a different phone from another maker) the total cost for this really nice, feature rich piece of trash was over $200.

Mick D
5.0 out of 5 stars iWhat?!
Reviewed in the United States on December 23, 2013
Verified Purchase
I've been an avid Apple supporter for years, and I still love my Macbook Pro more than anything. But having switched from an iPhone 4 to an LG Optimus G (for a penny no less), I have to say, I'm blown away, and I can't imagine ever wanting to go back to an iPhone. Comparing it with the iPhone 5, the Optimus G blows the iPhone out of the water. The specs are top notch, the phone is super fast as is the 4G LTE, and the screen is large enough and clear enough to make any gaming or movie viewing on the go quite enjoyable.
Read more
Helpful
Comment Report abuse

Paul Madruga
1.0 out of 5 stars Save yourself a headache (and some money) Don't buy!
Reviewed in the United States on November 3, 2013
Verified Purchase
On the surface this is a nice phone. I like the looks and feel of it. However right under the surface is a horrible flaw. This phone has been known to have the screen SHATTER (not just crack) for no reason. This renders the phone unusable. 2 days after getting it, that happened to my wife. A quick google search found that lots of people have had this problem. A call to LG resulted in us being told to ship them the phone and they would "check into it and see if they could fix under warranty". They would not tell the cost of repair if it were not under warranty. Found many forums where people had this same problem and LG said it was not a defect, that the phone must have been dropped. I called a couple cell phone repair places and was told the fix was $250 because the glass and LCD are fused together so both had to be replaced. Thankfully, Amazon took the phone back as an exchange. I used to like LG phones, but after this, I can't trust them.
Read more
Helpful
Comment Report abuse

Silvercrest
5.0 out of 5 stars May be a bit older, but still offers all the updates
Reviewed in the United States on July 26, 2013
Verified Purchase
This quad-core phone has the fast processor time of many of the newest phones, yet it's old enough to be very inexpensive (I paid a penny). I love that it's not quite as large as some of the newest (I already have a tablet!) but offers a beautiful screen that is easily read. Most of all - this is a usable phone with all the smart grade updates. Did I mention that it was cheap??
Read more
Helpful
Comment Report abuse

Matt McEntire
2.0 out of 5 stars Broke in less than a week
Reviewed in the United States on June 15, 2014
Verified Purchase
Day 6 of having this phone, it fell from the couch to the floor (which is an incredibly short distance), and now the bottom half of the screen no longer works. It is a very fragile phone. If you do not get a case with it, it will not last long.

However, while it did work, it was a phenomenal phone and worked very well and very quickly. Easily one of the best smart phones if have used in awhile.

If you are to get this phone, get a case for it ASAP.

Jeff Kay
3.0 out of 5 stars LG Optimus G, not so reliable.
Reviewed in the United States on October 29, 2015
Verified Purchase
I have owned 2 of these phones. I like the LG and it's interface, but both phones died the same way after approx 1 year. The SIM card stopped reading and brought down the mobile network. Moving to an HTC One M9. My old HTC phone never died....just became obsolete.
Read more
Helpful
Comment Report abuse

CGP
5.0 out of 5 stars Best phone I have ever used!
Reviewed in the United States on May 21, 2014
Verified Purchase
It is fragile but worth it. Super fast and the multitasking on it is just unreal! I cannot wait until LG comes out with their latest! I refuse to be a Samsung Slut and don't even get me started on that fruit company!
Read more
Helpful
Comment Report abuse
See all reviews