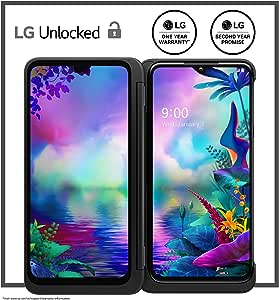 Visit the LG Store
4.2 out of 5 stars 211 ratings
| 171 answered questions
Amazon's Choice recommends highly rated and well-priced products.
Amazon's Choice for "lg g8x"
Available at a lower price from other sellers that may not offer free Prime shipping.
New & Used (2) from $560.73 + FREE Shipping

4.2 out of 5 stars
4.2 out of 5
211 global ratings
How are ratings calculated?
To calculate the overall star rating and percentage breakdown by star, we don’t use a simple average. Instead, our system considers things like how recent a review is and if the reviewer bought the item on Amazon. It also analyzes reviews to verify trustworthiness.

Always Samsung
4.0 out of 5 stars Great Dual Screen Option, But LG Misses the Mark Again
Reviewed in the United States on November 14, 2019
This is a really nice phone and I think LG put a lot of thought and care into making this product. However, LG falls short once again, and I think they could have done better. The phone is unlocked and I popped in my T-Mobile sim card and had no issues. I got 4G LTE reception immediately. No fuss at all. Yes, it has VoLTE (voice over LTE), wifi calling, and HD voice. I personally prefer the carrier branded phone, but T-Mobile is NOT carrying this and may never. This was truly a missed opportunity for them. Given they passed on the Samsung Fold, they needed an LG flagship for holiday 2019, and a device to stand out from the crowd, but they failed miserably by not carrying this device. Currently, this is only available on AT&T, Sprint, and unlocked.

Now, I like the LG user interface (UI) and wish they would have taken more care in revamping their UI to cater to large screens. As we all know, phone screens keep getting larger and larger. This makes one handed use even more challenging. To solve for this problem, the Samsung One UI semi fixes this problem by shifting all apps and menu options down to the bottom of the screen (not all apps, just some). This makes it easy for one handed use. Of course, that is Samsung specific and only on Samsung phones. However, I think LG should consider doing something similar, and making their own UI even better.

Given the proprietary Google/Android text messaging app is preinstalled, and can be downloaded from the Google Playstore at any time for FREE, it was a big mistake on LG’s part to omit their own LG app. Consumers could easily download the Google/Android proprietary one from the store, at any time if they wanted to. Not sure why anyone would. If I wanted pure Android, I would have gotten a Google Pixel. I can’t stand pure Android. It is the most boring software on the face of this planet. It is only good when Samsung, LG, and HTC put their own skins on it.

Once again, why did LG do this and leave out their own text messaging app? NO CLUE! It is included on the AT&T and Sprint versions. So much for giving consumers options. They didn’t even include their own LG calendar app which is great! LG, if you are reading this: PLEASE GIVE CONSUMERS OPTIONS. I don’t know what their mobile division was thinking. Why would they naturally assume Google makes good, or better apps? I understand it is Android, but it doesn’t mean everything Google does is PERFECT. In fact, a lot of Google apps are downright dull, boring, and unintuitive! Many of their apps haven’t gone through a redesign in years. I like Samsung, LG, and HTC’s skin overlay on top of the Android UI. It is what makes them special because Samsung, LG, and HTC offer dual apps. Aside from that, everything else runs really great and I have some minor complaints. See my list below:

Cons:
1. No 5G
2. Menu system should be updated to make one handed use easier for large screen phones
3. 5,000 MAH battery would be good
4. Should really be triple camera setup like the LG V40 (standard, wide angle, and telephoto lens)
5. LG UI lacks common LG apps like LG messaging and LG calendar (Really LG?) Had I known, I would have NOT purchased this phone.
6. Dual screen can make the phone a tad larger, but it is manageable
7. Dual screen case is very square and LG should make rounded edges to take away the appearance of a larger body
8. Only certain apps have dual screen use at the moment
9. Wish the bend portion was closer together so the screens are closer together
10. No T-Mobile jingle ringtone
11. No dedicated LG Video player app. Yes, I can use it via the LG Gallery, but like having both separate.
12. Wish it was a QHD display or 4K display, but 1080P is perfectly fine and more than enough
13. Dual screen stops once phone battery drops below 15% (Should be used till it goes to 0%)

TD
4.0 out of 5 stars If you multitasking, this phone is a dream
Reviewed in the United States on November 16, 2019
Verified Purchase
I don't know what is up with all the negative reviews but I find the phone is extremely versatile and useful. This phone is meant for multitasking not to make your screen bigger. If you want a big combine screen go get the Note Fold. I love this phone so far in term of practical uses. Beside, when I don't want the dual screen, I can easily fold down one screen or even remove it completely. If you do a lot of multitasking (email, Excel, research, etc.) this phone is a dream. If you just want to watch video on a huge screen then this is not.
One thing LG can improve on this phone is adding the Face Unlocked option, i hate the built in fingerprint as it's only works 80% of the time. Also LG if you read this, PLEASE change the side button into an ON/OFF button for the second screen. I find it's more useful than to bring up the Google search.
Read more
45 people found this helpful
Helpful
Comment Report abuse

Dauneric0
5.0 out of 5 stars The most functional use for a phone yet. Better and more practical than any folding phone.
Reviewed in the United States on December 8, 2019
Verified Purchase
Keeping it simple and honest, I love the phone completely. The phone itself is sleet and even though there is only 2 cameras, they are amazing. When I had the note 9 when i used tried to use the 2x zoom it only used the main sensor die to lighting, makng it useless. So i dont miss the lack of a telephoto lense. The speakers are oh equal volumne but the frequency response is bass and mids out of the bottom and treble out of the earpiece, this gave me a 9 out of 10 experiance for media comsumption. In that topic the headphone jack is simply amazing and destroys any bluetooth headphones and is super clean sounding. Now we move on to the case. I use the case maybe 2 days of the week, and only at home. I play Pokemon emulators on the dual screen and do research at the same time. And this review is being written on this device, using the extra screen as a keyboard, making typing completely easier and more practical. The phone when in the case last one full day of constant use no problem, and im a power user who loves YouTube. When not in the case i can easily get over 2 days if using modestly and if I am heavly using it I get 1.75 days before the low battery warning pops up. This is the best phone i have owned so far, and i intend to use this device for many years to come.
Read more
23 people found this helpful
Helpful
Comment Report abuse
See all reviews