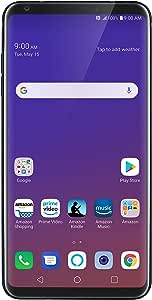 Compare to other phones

What will I receive in the box with my phone?

How do I set-up and activate my new Prime Exclusive Phone and Alexa Hands-Free?

How do I turn Alexa Hands-Free OFF and ON once I’ve set it up?

To turn Alexa Hands-Free OFF or ON, go to: Settings > General > Alexa > Hands-Free toggle. For quick access, use the pull-down menu at the top of your phone and tap the Alexa icon.

Does Wi-Fi calling and VoLTE calling work on this phone?

I am an application or software developer, can I unlock the bootloader on this phone?

Bootloader unlock codes are not available from Amazon or the manufacturers of Prime Exclusive Phones.

LG V35 ThinQ with Alexa Hands-Free. Simply say “Alexa” to play music, hear the news or check the weather wherever you are. Just ask- and Alexa will respond instantly. The LG V35 ThinQ comes with 6" QHD+ OLED FullVision display for vibrant viewing, two 16 MP rear cameras with AI Cam to analyze subjects and the environment in your frame to provide recommendations to get the perfect picture, 8 MP wide-angle front camera, Qualcomm Snapdragon 845 octa-core processor up to 2.8 GHz, and much more.

For warranty information about this product, please refer to warranty Manual [PDF ]

4.5 out of 5 stars
4.5 out of 5
389 global ratings
How are ratings calculated?
To calculate the overall star rating and percentage breakdown by star, we don’t use a simple average. Instead, our system considers things like how recent a review is and if the reviewer bought the item on Amazon. It also analyzes reviews to verify trustworthiness.

KB Tech
5.0 out of 5 stars Great phone for the price !!!
Reviewed in the United States on July 24, 2018
Color: Aurora BlackVerified Purchase
Pros:
1. Great build and feel in the hand. Light weight and even though it's screen size is large the overall footprint is small given the reduced bezels.
2. Audio champion with great HiFi DAC along with headphone jack.
3. Latest specs like SD 845, 6 GB RAM. This device is very snappy and can handle heavy usage easily. Don't see any lag, stuttering though it's still a new phone. Got to see how it ages.
4. Great OLED screen, last year LG OLED screens had issues with quality control but looks like this is a step up from earlier LG OLED screens. I have used many phones including S9+, iPhone X etc and you won't be disappointed with this screen.
5. Battery life has been above average and can easily get thru the day.
6. Camera especially wide angle is fun to use. Overall it's a great camera though not the best.

Cons/Nitpicking:
1. Single bottom firing speaker is average, not loud and clear like many other dual speaker phones.
2. Only 64 GB internal storage. There is micro SD card at least to expand but personally I would like to see higher internal storage. I believe this won't be a con to majority.
3. Updates, don't expect regular security and platform updates.
4. LG UI is alright, but personally use Nova launcher so easy to overcome.

boosted150
1.0 out of 5 stars Originally a decent phone, not any more. Review Updated 10/1/2018, and again 11/1/18
Reviewed in the United States on August 23, 2018
Color: Aurora BlackVerified Purchase
Tips to set up the phone: put the sim in before booting the phone for the first time. Connect to WiFi and let the phone install the system update first (mine updated to software version V350ULM10e, Android security patch level July 1, 2018), then reboot and install all of your Play Store Apps. If you do the OS update first with the sim card in, it will pull over your network settings (AT&T for me) and your phone will work correctly right away.

I verified WiFi calling does work, but for me I do not get the special icon (wifi icon with a plus sign) like I used to on my V20. Not a huge deal, just worth mentioning if you are looking for the icon to appear.

This V35 is lightning fast compared to the V20, apps are much quicker to respond (probably thanks to the upgraded processor and 6GB ram), and the camera is quicker to open/focus and takes better pictures.

I've only had the phone for a few days, but will update more later.

UPDATE 10/1/2018: After spending a few weeks with the phone, I reduced the rating from 5 stars to 4. The functionality of the phone is spot-on, it's quick, the pictures are magnificent, and battery life is great. However, connectivity to AT&T towers is severely lacking compared to my last phone which was a locked AT&T LG V20. I know I'm asking a lot of a phone to connect to a cell tower in Anchorage, Alaska, but compared to my last phone, in the same coverage area this phone drops phone calls, searches for towers, and struggles to stream music while driving which can be annoying (all things my previous AT&T LG V20 was able to do without issue). I have restarted the phone multiple times and also checked for updates (most recent update info: version 8.0.0, security patch level July 1, 2018, baseband MPSS.AT.4.0.c2.900040.1-SDM845_GEN-PACK-1.146983.13, kernel 4.9.65, build OPR1.170623.032, software version V350ULM10e).

This one has me scratching my head...

Verdict: I would buy again, but in a larger AT&T market with more available towers (not Alaska)

UPDATE #2 11/1/18:. I've reduced my rating to 1 star. The Bluetooth connection frequently drops. The phone will stay connected to the Bluetooth device but the audio path will randomly switch back to playing through the phone. This happens on all of my Bluetooth devices (speakers, headphones, and my 2017 F150), very annoying. I contacted LG about it, followed their recommendations but nothing has fixed it. They want me to now send the phone to them (which would leave me without a phone). I even refomatted, restored factory settings and started over and no luck (which also took a few hours to get all my apps and such back and organized).

Another issue that just showed up: Google Play will not install or update any apps. I've tried all of Google's troubleshooting including removing the SD card, resetting the cache/clear data for the Google play apps, uninstalling updates on the Google play apps (to force it to use the earlier program version), and so on. None of it has worked.

Do yourself a favor and stay away from this unlocked phone. Go to your carrier's store and buy one, that way at least you can get a glimmer of customer service.
Read more
107 people found this helpful
Helpful
Report abuse

Xanthus N. Murdaugh
5.0 out of 5 stars Amazing phone
Reviewed in the United States on August 3, 2018
Color: Aurora BlackVerified Purchase
This phone is getting overlooked simply because it doesn't say Apple or Samsung or Pixel. This is a true flagship phone. Speedy, buttery smooth, amazing screen and battery life. As of right now it gets 5 stars. I'll update this in 3 months.
Update after 90+ days. My review remains the same. Even with tons of apps downloaded, a few personal tweaks, that don't require rooting, this phone is still amazing. Love the dual cameras on the back and the AI cam is more function than gimmick in my opinion.
Read more
60 people found this helpful
Helpful
Report abuse

H
5.0 out of 5 stars An incomparable value for a flagship phone with no compromises!
Reviewed in the United States on July 27, 2018
Color: Aurora BlackVerified Purchase
Love this phone!!! I've had a V30 and a G7 and this is literally the best of both phones. It has a great display, it's stupid fast, and it's got all-day battery life. I was shocked that the unlocked phone supported WiFi calling, but can confirm that WiFi calling works with AT&T as well as T-Mobile, but not on Verizon. Don't know about Sprint. It's a steal for the price and the best phone I've had in some time!!!
Read more
58 people found this helpful
Helpful
Report abuse

Rick
5.0 out of 5 stars Beautiful Device. Incredible Value
Reviewed in the United States on August 22, 2018
Color: Aurora BlackVerified Purchase
I purchased the V-30 when launched in October 2017and absolutely loved it. The quad dac/amp is incredible. When the G-7 ThinQ came out on T-MOBILE I fell in love with the form factor and purchased it. I really like the upgraded audio on the G-7 with the DTS-X Surround and adjustable equalizer neither of which are on the V-30. So when I found the V-35 ThinQ on Amazon for $250 less than anyone else and with the upgraded audio from the new G-7 ThinQ I had to have it. This device is superb. Great screen cameras audio all outstanding. Highly recommend this device to audiophiles. Read the V-30 quad dac review on Stereophile. This is the best priced true flagship device available. Update: When Amazon had this amazing device on sale Black Friday for $549 I bought the Platinum version. Pictures don’t do it justice. The Platinum finish is the most beautiful that I’ve ever seen on any device. Can’t recommend highly enough.
Read more
36 people found this helpful
Helpful
Report abuse

CosmoDee
5.0 out of 5 stars Amazing camera!
Reviewed in the United States on August 15, 2018
Color: Aurora BlackVerified Purchase
I did some research on this phone prior to purchasing it and I must admit that this is quite possibly the best cellphone camera I've ever used. I've had the iphone 7 plus, google pixel 2 XL and the motorola X4, and in my opinion LG V35 is the best cellphone camera between the four that I've experienced. It's (AI) artificial intelligence mode and wide angle lens is what did it for me. The colors are lightly saturated but that's what I want from my camera experience.
Read more
35 people found this helpful
Helpful
Report abuse
See all reviews
Pages with related products. See and discover other items: fingerprint sensor, movie camera, lg smart phone, phones lg, lg phone, lg phones