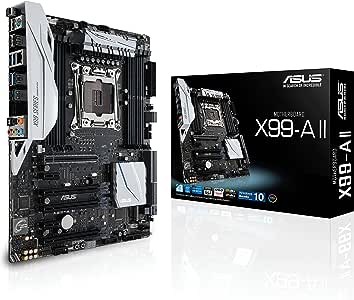 3.3 out of 5 stars
3.3 out of 5
83 customer ratings
How does Amazon calculate star ratings?
Amazon calculates a product’s star ratings based on a machine learned model instead of a raw data average. The model takes into account factors including the age of a rating, whether the ratings are from verified purchasers, and factors that establish reviewer trustworthiness.

Amazon Customer
1.0 out of 5 stars Board failed after 8 months of regular use, ASUS RMA department has been useless.
Reviewed in the United States on April 18, 2017
Verified Purchase
Product worked fine for 8 months, then failed spectacularly. Was skeptical buying because of the horror stories I had read about this thing failing, but the board was highly reviewed, and I didn't plan on overclocking anything so I figured it was unlikely. Unfortunately I was wrong to trust the reviews, as the board caused my computer to crash while I was in the middle of a session, and has been a pain to troubleshoot.

If ASUS had quickly responded with a new board, this review wouldn't be nearly as bad, but my experience dealing with their RMA department has been a nightmare. After speaking with them over the phone, they told me to try reseating the CPU and attempting again. So I did that, to no avail, and called back, this time waiting on hold for 50 minutes! I only finally reached them when I opened a chat window on their site for 15 minutes, when they responded that they were updating their system (which they said might be why nobody picked up the phone) and that I should call again the next day because the system was still down. So I waited until the next morning, and called again, reaching a rep who spent 20 minutes asking me if I had done everything else to troubleshoot, despite me explaining that I had already testing the PSU, cables, resetting the CMOS, tried booting without any peripherals, with only one stick of RAM, with only the CPU and CPU fan left on the board, ect. After all this, I was put on hold for 10 minutes before the rep informed me that they were out of stock and to call back again the next day for an advance RMA. It's been 3 days since the board failed and I am no closer to getting this resolved.
Seeing as failure with this board is a known problem, their lack of a timely response was astonishing. I have dealt with an RMA with EVGA in the past and they shipped me the part no hassle within 20 minutes of reaching out. After this, I will never buy an ASUS board again, and would highly discourage anyone from doing so.

Jason
1.0 out of 5 stars Pretty good until something goes wrong and you have to deal with Asus' RMA process...
Reviewed in the United States on July 10, 2017
Verified Purchase
This board had the looks I wanted with a decent feature set and at the right price. I wish I could say the fun lasted, but sadly the board failed just shy of one year of use, and took out my i7-6850K in the process. Of course, a quick google search will reveal that this seems to be a trend across Asus X99 boards with Broadwell-E chips, yet there's no official statements or warnings from Asus about using these chips in their X99 boards.

(13 June 2017) - I've begun the (infamous) RMA process with Asus after taking the board and CPU to a local computer repair shop to confirm that both the board and my $500 CPU are dead (they used another X99-A II and a i7-5820K to verify that my board doesn't boot with a known good CPU, and that my CPU is unresponsive when installed in a known working board.) $50 diagnostic fee.

(10 July 2017) - Received board from Asus. It's the same board that I sent to them, but to my dismay, the report paper in the box says the board "test ok" and the only fix action they took was to "Reflash or update BIOS". So at this point, I don't have a spare $500 CPU to test the board with, so I'll be taking it back to my repair shop to let them test it again (another $50). I'm finding it extremely difficult to believe that Asus was able to "fix" a board that killed my CPU and was completely unresponsive by casually re-flashing the BIOS.

So far I've paid $50 for diagnostics, $48 in shipping, and I'm about to pay another $50 diagnostic fee to find out if by some blind luck that the board magically fixed itself with a BIOS reflash. That's almost $150 spent trying to repair/replace a $240 board, and Asus tech support's only recommendation at this point is to mail it back to them so they can double-check it.

At this point, I'm not sure that Asus could do anything to rectify this issue since I'm approaching the cost of a whole new board. Intel issued an RMA for the CPU with only a 5 minute phone conversation, and has already committed to sending me a brand new sealed-in-box CPU to replace the dead unit. Are you paying attention yet, Asus!??

I once believed Asus made competitive priced products with quality components, and that may still be true, but it's how you handle the small issues that arise that will ultimately define the reputation of your business. I'll no longer be recommending Asus to any of my fellow builders, and I'll be taking my own business elsewhere from now on.

Robert J. Willard
1.0 out of 5 stars They wasted my time and money
Reviewed in the United States on July 24, 2017
Verified Purchase
Only lasted 3 weeks then it died when i was streaming live with it. I went to take a pea and came back and my computer was turned off. I took each part out of my pc 1 by 1. To find out the motherboard had just died when i was using it. I contacted asus support on there website via chat and they told me they would not replace or fix the motherboard. they told me i would need to buy a new board or pay to have it fixed. This isn't the first time I've dealt with asus support so i wasn't surprised. back when i bought the asus gtx 670 which i had for about a year and a half it also died randomly after having it for a year and a half. I contacted asus and did a rma I sent my dead asus gtx 670 back to them 4 times. 3 times they didn't even check it. They wasted my time and money. I had to drive into town 3 times back and forth just to send out that card. The only reason why i got a replacement card the 4th time was because i told them how many asus products i owned. I told them if they didn't send me a new card and replace mine under warranty i'd never buy a single asus product again. And i also said that i will tell everyone i know about there crappy support and products and to never buy anything from them again. I had no choice to say the things i said after the way they wasted my time and money. I'm sick of asus wasting my time. I hope they go out of business simple as that. If asus can't stand by there products and cant stand behind there warranty's then they shouldn't be in business simple as that. Anyway's i contacted amazon and they gave me a refund minus the re stocking fee they never mentioned which was 30 bucks. But hey it was way better then dealing with asus support LUL and i was able to go buy the X99A GAMING PRO CARBON. Which i'm writing this on now. Sure the board layout on the asus x99 A2 is better if it works. Buyer beware if you buy one of these boards. Load test it @ 100 percent cpu usage for a few days using intel extreme tuning app. I do this know on all builds i do. This way i know the motherboard isn't gonna die randomly.
Read more
4 people found this helpful
Helpful
Comment Report abuse
See all reviews from the United States