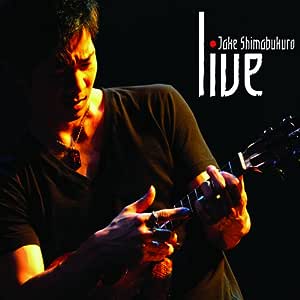 Ukulele master Jake Shimabukuro has taken the four-string, two-octave instrument to places no one has gone before, performing awesome music that ranges from Jazz, Blues and Rock to Bluegrass, Classical and Folk. His live concerts are an out-of-the-box blend of stunning virtuosity, deep musicality and a natural entertainer's flair. Jake now has his own record label, and tours extensively in the U.S. and Japan. He has completely rewritten the book on the possibilities of the ukulele -- and is adding new chapters with every CD he records.

4.7 out of 5 stars
4.7 out of 5
75 customer ratings
How does Amazon calculate star ratings?
Amazon calculates a product’s star ratings based on a machine learned model instead of a raw data average. The model takes into account factors including the age of a rating, whether the ratings are from verified purchasers, and factors that establish reviewer trustworthiness.
Top reviews

klavierspiel
5.0 out of 5 stars Staggering virtuoso on an unlikely instrument
Reviewed in the United States on July 8, 2009
Verified Purchase
I caught Jake Shimabukuro in Austin, TX recently, fresh off a tour with Jimmy Buffett. In live performance he was a wonder, his entire body swooping and weaving as his fingers flew up and down the short fingerboard of his ukulele, making the instrument sound like a mandolin, a flamenco guitar, a piano, and sundry percussion instruments. He was not just a smokin' hot player, though, but an expressive musician with an unforced charm in his asides to the audience, which the night I was there was totally enthralled.

Much of Shimabukuro's charisma comes through on this live album, taken from various performances in various locations, but remarkably consistent in sound and atmosphere. His own compositions span the gamut from the simple charm of "Piano-Forte" to the jaw-dropping virtuosity of "Let's Dance," while he covers everything from Bach to the Beatles to a Japanese folksong, "Sakura Sakura."

If pressed to the wall I'll admit that, without having him in the flesh, a tiny sense of sameness creeps into some of his longer original compositions. It's not surprising that one of the best tracks, and the one that shot him to fame, is a cover, his lovely and touching take on Harrison's "While My Guitar Gently Weeps." This is a very personal reservation and shouldn't discourage anyone from sampling the art of this very special musician.

Glenn Tepper
5.0 out of 5 stars Early Jake…
Reviewed in the United States on June 24, 2019
Verified Purchase
Of note, this CD features Jake solo, with no other accompaniment. So if you want to really hear his playing, this album is one to get.
Read more
One person found this helpful
Helpful
Comment Report abuse

eileen cTop Contributor: Fountain Pens
5.0 out of 5 stars LIVE is a winner!
Reviewed in the United States on March 30, 2017
Verified Purchase
Amazing CD!! I have listened to it so often that it just may wear out! Jake is incredibly gifted on uke and composition. If you haven't listened to his work yet, you really should! He doesn't disappoint
Read more
2 people found this helpful
Helpful
Comment Report abuse

Carol P Trump
5.0 out of 5 stars Unbelieveable
Reviewed in the United States on December 15, 2013
Verified Purchase
I am a retired music teacher for grades Kindergarten, first and second grades. In the ;Spring we would student the four instrument families. I would take in my ukelele and strum a few chords - that is all I had ever heard anyone do. I was in the car when I heard Jake perform on NPR. I yelled ;and shouted my appreciation of; his tremendous ability and skill. He plays with perfection of rhythm and pitch, of course, but also with great musicality and expression. It is pure ;joy to listen to him perform. He did not achieve today's fame but by practicing only 30 minutes a dat!!!!!!
Read more
Helpful
Comment Report abuse

Bob S
5.0 out of 5 stars Not your father's ukelele playing - this is Jake at his best.
Reviewed in the United States on April 2, 2014
Verified Purchase
Jake is simply amazing on the ukelele. His virtuoso playing is legendary. To hear him live is a treat. To hear a live recording of him, enjoying and feeding off the crowd's energy, is the next best thing to seeing him live. This CD is Jake at his best. Doing all genres of songs, his ease and skill of playing comes through. If you're looking for ukelele playing at its best, this CD is for you.
Read more
2 people found this helpful
Helpful
Comment Report abuse

Karen Schetina
5.0 out of 5 stars A Love Affair with Jake Shimabukuro and the Ukulele
Reviewed in the United States on May 21, 2015
Verified Purchase
My stepmom informed me that she had recently become enamored with the Ukulele and was considering taking lessons. I decided that I wanted to become familiar with Ukulele music so I could appreciate her interest. I went to the internet and in pretty short order discovered Jake Shimabukuro and immediately fell in love with the Ukulele, but even more so with Mr. Shimabukuro and the extraordinary sounds that he elicits from this wonderful instrument. I sent LIVE: Jake Shimabukuro to my stepmom for her birthday and she called me after listening to this album to tell me how much she loved it. Consider this a 5-Star rating from each of us!
Read more
One person found this helpful
Helpful
Comment Report abuse

H. Nakayama
5.0 out of 5 stars Great Compilation of Live Uke Performances
Reviewed in the United States on August 21, 2013
Verified Purchase
It is utterly amazing, the amount of energy and excitement that comes out of such a small acoustic instrument! I love listening to this CD. Some of the stuff could have smoother transitions, and less rushing of the tempo, but he is taking it to the limit at those times. So, there has to be some forgiveness for this. On the whole it is a joy to listen to this CD.
Read more
One person found this helpful
Helpful
Comment Report abuse
See all reviews from the United States

Amazon Customer
1.0 out of 5 stars Disappointed Ukulele Fan
Reviewed in the United Kingdom on January 16, 2019
Verified Purchase
Had to dispose of this disc....my fault for not reading the tracks........it is totally against my morals to buy anything containing Michael Jackson. .....very disappointed as I love the Ukulele. Think I will stick to George Formby.
Read more
Helpful
Sending feedback...
Thank you for your feedback.
Sorry, we failed to record your vote. Please try again
Report abuse

See all reviews from the United States
Pages with related products. See and discover other items: live rock music