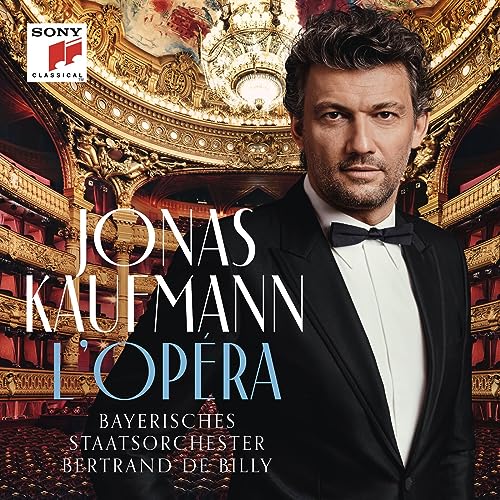 Jonas Kaufmann
September 15, 2017
4.6 out of 5 stars 225 ratings
See all 5 formats and editions Hide other formats and editions
Buy the CD album for $10.49 and get the MP3 version for FREE.&nbspCD album ships from and sold by Amazon.com. Terms and Conditions. Does not apply to gift orders. Complete your purchase of the CD album to save the MP3 version to your Music Library.

4.6 out of 5 stars
4.6 out of 5
225 global ratings
How are ratings calculated?
To calculate the overall star rating and percentage breakdown by star, we don’t use a simple average. Instead, our system considers things like how recent a review is and if the reviewer bought the item on Amazon. It also analyzes reviews to verify trustworthiness.

JF THIBAULT
5.0 out of 5 stars Much more than a recital of French tenor arias from a great and thoughtful artist!
Reviewed in the United States on September 27, 2017
Verified Purchase
Jonas Kaufmann shows himself as one of the best French tenors(yes I know he is German!) The arias he has chosen to record, with great care and thoughtfulness as to the nature of the music and the value of the words he sings with perfect diction and enunciation (read his remarks on the influene of german literature on French Opera composers in the notes which accompany this issue) Most of the arias he ha chosen to interpret are reflective, almost wistful and he sings them as such in a pensive manner. His use of semi-teinte and head-voice does not preclude the use of a full, well centered fortissimo when required. Another plus of this recital is that we are given whole scenes ans not just arias. Orchetsra preludes to arias are wonderfully played by the Bayersches Staatsorchester under the subtle and masterful direction of Bertrand de Billy. The famous duet for Baritone and tenor from the pearl Fishers is sung with with the French Ludovic Tezier and two scenes from Massenet's Manon are partnered with Sonya Gontheva, a lovely soprano whom I hope to hear in the full role...) All in all a great demonstration of the multi faceted talents of this great tenor
Read more
27 people found this helpful
Helpful
Report abuse

An old guy at the beach
5.0 out of 5 stars Buy this recording! You will not be disappointed!
Reviewed in the United States on September 20, 2017
Verified Purchase
Simply fantastic! I am a huge fan of Jonas Kaufmann and he does not disappoint on this recording. I think he has some unusual internal connection with this particular music. He seems to just belong to it. And the duets with Sonya Yoncheva and Ludovic Tézier are simply great. Ms. Yoncheva thrills in the Manon and of course the Pearl Fishers duet with these two fine voices is exciting and touching. I only wish some of the lesser done operas could get produced and recorded so Mr. Kaufmann could be seen in them. L'Africaine, Le Cid, Le Roi D'Ys, and La Juive would be real treats. There were once mainstays of opera houses around the world. Now unfortunately mostly lost to history except for the famous arias.

Buy this recording! You will not be disappointed!
Read more
16 people found this helpful
Helpful
Report abuse

FCD
5.0 out of 5 stars Lessons on the sublime
Reviewed in the United States on November 5, 2017
Verified Purchase
This is a ravishing album by one of the most gifted tenors on the opera scene. The program offers up mainly chestnuts of the French repertoire that showcase Kaufmann’s range-- form the lighter colors and more supple textures of Thomas’s Mignon and Lalo's Roi d'ys to the heavier, more forthright declamations of Berlioz’s Les Troyens. Kaufmann can sing soft, he can sing loud; he can hit high notes, he can sing low; he can be ponderous, he can be agile. Still, the natural darkness of the voice tends to make the more dramatic selections more convincing. The last four tracks on the disc-- excerpts from Le cid, La juive, La damnation de Faust,and Les Troyens-- are particularly arresting. The lighter selections come off as less convincing. "Elle ne croyait pas.." from Mignon is beautiful, but in an effort to create intimacy Kaufmann sounds like he is holding back and covers the voice in a rather artificial way. When exploring more flexible vocal arches and softer dynamics his voice does not fail to impress, but it sometimes comes off as showy a la Caballe or Fleming where the impressive technique gets in the way of expressiveness (see, for example, "L’amour" from Gounod’s Romeo and Juliette).

Eddie Corbett
3.0 out of 5 stars Great Singer, (Mostly) Wrong Repertoire
Reviewed in the United States on January 20, 2018
Verified Purchase
Great selection of repertoire (both very familiar and off-beat); outstanding conducting; two excellent singers for the duets (Tezier and Yoncheva). Yet most of the time I was yearning for a different voice to sing on this CD. Kaufmann is a phenomenon, the closest thing to a marketable Pavarotti we have now, and he's unfailingly tasteful and dramatically committed to everything he does. It's just that the voice is simply too thick, heavy, and baritonal for this repertory. His French is pretty decent, but by no stretch of the imagination is this a French-sounding tenor. Some of this is mitigated when Kaufmann is seen performing live or on DVD (he's an unforgettably great Werther), but the voice, heard in isolation, just doesn't convince this listener. Even the famous solo turn from "Les Troyens", powerfully and accurately sung, isn't as effective as a total embodiment of the music as Michael Spyres' is in the most recent recording of the complete opera. "L'Opera" is best appreciated by JK completists.
Read more
6 people found this helpful
Helpful
Report abuse

C Dea Patzau
5.0 out of 5 stars Something worth adding to my collection
Reviewed in the United States on November 1, 2017
Verified Purchase
As always a delight to listen to. Kaufmann has the ability to use his voice like a master painter his brush. He colours the notes mixing as needed with softness.as if caressing and domination with power and strength. When I first heard him sing, knowing nothing about him, the quality of his voice brought tears to my eyes. Quite something!
Read more
3 people found this helpful
Helpful
Report abuse

Jacqueline Diamond
5.0 out of 5 stars He just keeps getting better
Reviewed in the United States on December 14, 2017
Verified Purchase
He's one of those rare singers who lives up to the hype. A gorgeous voice, artfully shaded to make familiar songs fresh. A standout even in my large collection of tenor discs.
Read more
3 people found this helpful
Helpful
Report abuse

Arnie B.
5.0 out of 5 stars Superb
Reviewed in the United States on January 20, 2018
Verified Purchase
Since 1980 I've bought perhaps 200 opera CDs. If I could keep only ten, this would be one of them. 'Nuff said.
Read more
3 people found this helpful
Helpful
Report abuse
See all reviews

riverbaby
5.0 out of 5 stars what a singer!
Reviewed in the United Kingdom on October 23, 2017
Verified Purchase
This CD, on the other hand, is superb. I am a great opera lover and I must say some of this was unknown to me. However, it was beautifully sung, particularly the Manon section.
Having seen Kaufmann in Otello, which is not easy to watch, I was overwhelmed. He was incredible.
Read more
6 people found this helpful
Report abuse

mrs s.
5.0 out of 5 stars Fantastic!!
Reviewed in the United Kingdom on January 12, 2020
Verified Purchase
Brilliant performances. I wasn't familiar with some of the arias but I am now! Jonas Kaufmann is endowed with a magnificent voice with an extraordinary range. If you love opera you will love this!!
Read more
One person found this helpful
Report abuse

W. Kennedy
5.0 out of 5 stars Same as usual
Reviewed in the United Kingdom on July 16, 2019
Verified Purchase
As always Kaufmann is superb. I would have loved to se him in the recent Trojans DVD but he had to pull out for vocal problems, I have many of his performances on DVD and recitals. He never disappoints. I hope to buy many more in the future, W.K.
Read more
Report abuse

Gwen
5.0 out of 5 stars Beautiful.........
Reviewed in the United Kingdom on April 29, 2020
Verified Purchase
I disappear into a world of my own when I hear that wonderful voice ! As one lady wrote , you don't need to be young to appreciate the fantastic voice .I have several cds of Jonas Kaufman and love them all ,it seems that whatever style he sings in ,he is at home ……..the more the merrier .
Read more
Report abuse
See all reviews