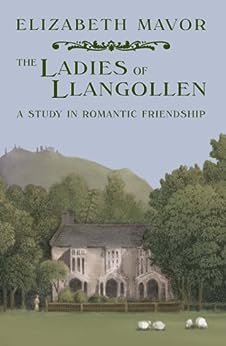 The Ladies of Llangollen: A study in Romantic Friendship Kindle Edition

“A love affair that triumphantly defied convention.” -- Sunday Telegraph --This text refers to the paperback edition.

4.2 out of 5 stars
4.2 out of 5
53 global ratings
How are ratings calculated?
To calculate the overall star rating and percentage breakdown by star, we don’t use a simple average. Instead, our system considers things like how recent a review is and if the reviewer bought the item on Amazon. It also analyzes reviews to verify trustworthiness.
Top reviews

patricia nisler
3.0 out of 5 stars The book that enhanced my visit to Llangollen Wales.
Reviewed in the United States on July 20, 2017
Verified Purchase
I read this book because I was to visit Llangollen Wales when in that country in May, 2017. This book was very good for my purposes, as when we arrived in Llangollen, we learned that the Ladies' home had become a museum and also had a small cafe for lunch. We did lunch and toured the Ladies' home, which enhanced my appreciation for the contents of the book and the life stories of Lady Eleanor Butler and Sarah Parsonby, the subjecs of the study in Romantic Friendship. The scholarship of the author in reviewing notebooks, journals, ledgers and letters was remarkable, but also led to a rather stilted way of telling the ladies' stories. I found it a bit difficult to read because of the details in the references back and forth to the source material. I kept with it and was ultimately happy to have finished it. I think the saga was worth a book. Certainly their unique lives in written form and in the restoration of their home, with artifacts and memorabilia of the many celebrities of the day who visited them there to view the coming to life of Romanticism's concept of "Retirement" as a practiced lifestyle, deserve the remembrance.
Read more
One person found this helpful
Helpful
Report abuse

A traveler, not a tourist...
5.0 out of 5 stars Detailed account of two extraordinary ladies...
Reviewed in the United States on May 2, 2021
Verified Purchase
Interesting history of two ladies' story & their time...
Read more
Helpful
Report abuse

Darlene C. Bowman
5.0 out of 5 stars delighted with book, and swift delivery!
Reviewed in the United States on May 8, 2020
Verified Purchase
Nothing to dislike and everything to like. The book is in wonderful condition and shipped at the speed of light. Thank you! Dee
Read more
Helpful
Report abuse

Sandra Taylor
5.0 out of 5 stars Absorbing account of a loving friendship
Reviewed in the United States on October 26, 2015
This book by Elizabeth Mavor is probably the most exhaustive treatment in existence of the once-famous "Ladies of Llangollen" - two women who battled their families to allow them to escape the normal upper-class feminine fate of either marriage or a convent. They lived in the late eighteenth-early nineteenth century, the privileged offspring of two families of the Irish Protestant Ascendancy. Lady Eleanor Butler was the elder and more dominant of the two. She was regarded by her family as an over-educated bookworm and was sometimes characterised as "satirical". What this probably means is that she was a bit too intelligent and forceful in personality to be happy in a conventional marriage! Sarah Ponsonby's personality is harder to bring into focus; she seems to have been gentle and compliant, which would have suited Eleanor.

In 1778, deciding they wanted only to live together in "romantic friendship", the two women made a break for it, dressing in men's attire and taking a boat to Wales. They were soon hunted down and returned to their families; however, their absolute determination to be together caused the families to finally relent and they were allowed to leave.

After hunting for a place to stay, they leased a house which they named "Plas Newydd" (New Hall) in the small town (or large village) of Llangollen. Here they settled down to occupy themselves reading, writing, drawing and building a much-praised garden. Their lives were uneventful and their days almost rigidly structured, judging from the entries in Eleanor's journal. They were accompanied by a sympathetic housemaid, Mary Carryll, for cooking and basic chores. They also employed other "help", about which they complained much, in the habit of the upper classes. The odd thing is that they managed to do all this in a constant state of financial hardship. They had been allocated a niggardly allowance by their wealthy families, but eventually, through influential contacts, managed to secure pensions. These, however, were often months in arrears - in part due to the Napoleonic wars - so the ladies existed on loans from generous friends. Despite these circumstances, the ladies continually overspent: if the garden needed treatment, or the rooms needed painting, they went right ahead and got it done!

As time went by, they became a kind of tourist attraction: many famous names of the day visited them, including poets Wordsworth, Shelley and Byron and the novelist Sir Walter Scott. They also kept up a voluminous correspondence with their growing list of friends. They became firm favourites in their neighbourhood and regularly gave whatever they could spare to the needy.

Eleanor Butler, predictably, died first, reaching the age of 90. Sarah Ponsonby, who had cared devotedly for Eleanor into her dotage, died only two years later; although only in her seventies, perhaps she did not want to go on living without Eleanor.

This absorbing account of their lives cannot tell us whether they had a sexual relationship or not, but it hardly matters: their partnership was fulfilling for them both and better than many marriages.
Read more
6 people found this helpful
Helpful
Report abuse

Andrew Jones
4.0 out of 5 stars Were they or weren't they?
Reviewed in the United States on June 21, 2000
This is the life story of Sarah Ponsonby and Lady Eleanor Butler - the Ladies if Llangollen, who eloped together from their Irish homes in 1778, and settled in Llangollen, where they set up a household which was famous in their day, and ever since, as the `Ladies of Llangollen'. Mavor's work - originally published in 1971 - remains the definitive work on the subject, largely in the absence of any competitor. Mavor gives a detailed description the circumstances of the Ladies elopement, and their living arrangements at Plas Newydd in Llangollen. She situates the Ladies in the `society' of their day, to the extent that I wondered whether Mavor fancies - or wished - herself in similar circles. There are interesting questions about Sarah and Elizabeth's backgrounds (both Irish, on Protestant, one impoverished Catholic), and how far their backgrounds account for their choice of such and unconventional lifestyle, which might be better addressed by a contemporary author, with an understanding of the operation of `oppression'. On the question of whether the Ladies were lesbians, Mavor is straightforward in supporting their denial of such an accusation, and her presentation of the evidence is rather stronger than some more recent attempts to claim Sarah and Eleanor to the cause, without really considering the circumstances of their lives. However, there is room for an investigation of the subject which is more aware of recent work on the subject. The Ladies remain a fascinating and under-researched subject, and Plas Newydd is a delightful place to visit; in the absence of a new account, Mavor's work remains definative.
Read more
21 people found this helpful
Helpful
Report abuse

Carol L. Iingraham
4.0 out of 5 stars Outstanding Work
Reviewed in the United States on December 5, 2012
I read this work when it first came out in 1971. I have since rereaded it and I still find these ladies full of extraordiinary courage considering the time they had to live in. E. Mavor did a wonderful job depicting a relationship that lasted over fifty years. For easy and fun readinng I would recommend this book for any history buff.
Read more
6 people found this helpful
Helpful
Report abuse
See all reviews

In a perfect world, you'd want the hardback, just because it's so beautifully produced - but get the second-hand paperback, and revel in the world of the Ladies. Elizabeth Mavor's idea of following them through the seasons - for example, a couple of dozen Januaries across fifty years or so - was inspired: you feel the world changing, and yet not changing, around them. What a diarist Lady Eleanor Butler was - and how Sarah Ponsonby's more structured, more literate letters support Eleanor's sharp entries. And if you can, and haven't already, go to Plas Newydd - you can still feel them there, and the ladies who look after it during opening hours talk about them as though they'd been gone only a handful of years.
Read more
4 people found this helpful
Report abuse

Lexy
4.0 out of 5 stars If you no the story, this is good
Reviewed in the United Kingdom on April 11, 2013
Verified Purchase
I like this book because it shines light on what some people now believe to be a local legend. The two ladies who lived together in Llangollen have become somewhat of a image of the area, but this book looks into their background and the "real" ladies of Llangollen.
Read more
3 people found this helpful
Report abuse

E. Kennard
4.0 out of 5 stars Very good
Reviewed in the United Kingdom on September 21, 2013
Verified Purchase
I came across this in a reference from another book. Really enjoyed it. They survived in a "button up" society
Read more
2 people found this helpful
Report abuse

Mr. R. A. W. Archer
4.0 out of 5 stars Tells a good true story.
Reviewed in the United Kingdom on October 2, 2013
Verified Purchase
This book has been around for a long time now,and looks to be the best to tell the story of two very interesting ladies.So go on and buy one!
Read more
2 people found this helpful
Report abuse
See all reviews