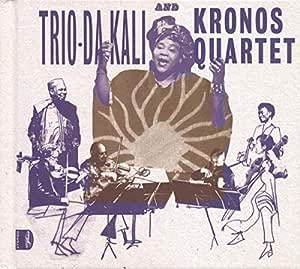 Go Unlimited
Start your 30-day free trial
Stream Ladilikan by Trio Da Kali & Kronos Quartet and tens of millions of other songs on all your devices with Amazon Music Unlimited. Exclusive discount for Prime members.
Sold by Amazon.com Services LLC. Additional taxes may apply. By placing your order, you agree to our Terms of Use.

4.7 out of 5 stars
4.7 out of 5
41 customer ratings
How does Amazon calculate star ratings?
Amazon calculates a product’s star ratings based on a machine learned model instead of a raw data average. The model takes into account factors including the age of a rating, whether the ratings are from verified purchasers, and factors that establish reviewer trustworthiness.
Top Reviews

Dr. Debra Jan Bibel
TOP 1000 REVIEWER
5.0 out of 5 stars Kronos Revisits Mali Magnificently
Reviewed in the United States on September 15, 2017
Verified Purchase
Pieces of Africa [1992] with Foday Musa Suso from Gamba and Obo Addy of Ghana was the Kronos Quartet's first recorded examination of the West African sound. After many other musical adventures around the world, including a couple tracks with Rokia Traoré [2004], Kronos now dedicates an entire album to familiar, and wonderful, music of Mali with Trio Da Kali, whose members are vocalist Hawa 'Kassé Mady' Diabaté, Fodé Lassana Diabaté, balafon marimba, and Mamadou Kouyaté (son of Bassekou Kouyaté), bass n'goni lute. Balafon and kora or n'goni is the traditional instrumental combination of the region.

The CD packaging is in the form of a jewel case-sized book with notes and translations of the songs in English and French. Diabaté, of a famous griot family (daughter of Kasse Mady Diabaté), has a strong mezzo voice that demands attention. Her tunes offer social commentaries. The lead track refers to youth marrying according to heart rather than parental match-making, while another urges honesty and keeping of promises. Praise songs are included, not of rulers but of musician friends and heroes. Her gospel tracks, God Shall Wipe All Tears Away, and Ladilikan [derived from I'm Going to Live The Life I Sing About in My Song [advice against hypocrisy], with added deep notes of cello and electronic 'organ' and 'fuzz,' while sung with Mahalia Jackson in mind, recalls the strength and dignity of Marian Anderson's spirituals. Kene Bo, a ceremonial wedding piece, has accompaniment similar to an East African, Shona Zimbabwe mbira thumb-piano tune, at least in phrasing rhythm. Sunjata is part of an epic of the 13th-century hunter-king who established the Mali empire, and Kronos provides medieval flavors in accompaniment. The trio dominates the instrumentation across the tracks, with the Quartet mainly adding harmony, rhythmic emphasis, and occasional counterpoint, though the additional timbre and ornamentation of the strings add more color. The purely instrumental piece Samuel and the bluesy gospel Ladilikan, however, are where balafon and Quartet shine in their collaboration. This is a powerful, beautiful, indeed outstanding album, balanced in style and arrangements, and performed brilliantly. There is much to enjoy here.

K. J. Hess
5.0 out of 5 stars Rhythmic and beautiful
Reviewed in the United States on April 5, 2018
Verified Purchase
Our local NPR station played it. I was in the car and so entranced that I missed my exit and then the driveway. Very intricately performed. A must have for me.
Read more
4 people found this helpful
Helpful
Comment Report abuse

Julia Nunez
5.0 out of 5 stars Gorgeous vocals and blend of instruments.
Reviewed in the United States on July 31, 2018
Verified Purchase
I bought this CD after hearing it played on NPR. I love the Kronos Quartet and love this
CD as well. The singer's voice is outrageously beautiful and husky. My favorite song is Ladilikan.

Richard Weems
4.0 out of 5 stars yes, Kronos
Reviewed in the United States on February 11, 2018
Verified Purchase
There's just never telling what Kronos will pick up next. Their fascination with world music is refreshing and wonderful.
Read more
One person found this helpful
Helpful
Comment Report abuse

Amazon Customer
5.0 out of 5 stars Another interesting Kronos collaboration
Reviewed in the United States on December 16, 2017
Verified Purchase
as always, you think it shouldn't work, but it's amazing
Read more
One person found this helpful
Helpful
Comment Report abuse
See all reviews from the United States

alneman
5.0 out of 5 stars A classic album combining an acclaimed string quartet with Malian griot musicians under Nick Golds sypmathetic production
Reviewed in the United Kingdom on January 30, 2018
Verified Purchase
I got this album shortly before Christmas. It came out highly placed in a number of end of the year album listings, and actually made it to the prestigious number 1 slot in fRoots magazine albums of 2017. It is a very successful fusion album between a trio of the finest traditional griot musicians from Mali in a recording studio with one of the most revolutionary and renowned Western music's string quartets. The distinctive soaring vocals of singer Hawa "Kasse Mady" Diabate have a power and range that holds the whole album distinctively together.

The whole enterprise is supported by the very fine World Circuit label who bought us Cuba's outstanding Buena Vista Social Club, probably the best world music album ever. With the same producer, Nick Gold at the helm, together with Lucy Duran from Radio 3 also involved in bringing this unique collaboration to fruition. The record is something special, it was recorded inside 4 days in a studio in Switzerland, the 2 sets of musicians had not met beforehand, and come from very different cultural backgrounds, but they are beautifully complementary when creatively combined together with careful sympathetic production. It is a gorgeous symbiotic relationship, with both highly regarded groups of musicians in their own right coming together in a spontaneous interplay that is captivating and intriguing, with a respect for each others cultural heritage. The whole is greater than the sum of the parts, it all works remarkably well to produce a stunning fusion record that is fresh, vibrant and intriguing.

The whole thing works wonderfully over 10 tracks , and grows in standing with repeated listening, brilliantly executed, a bold outstanding album that deserves to be heard more widely. The intuitive interplay between the musicians is marvellous to listen to, and its subtleties reveal themselves with repeated plays to make a true classic album to be revered and relished, very enjoyable enlightening listening that can be warmly recommended, with stunning sounds to relish..

RobA
5.0 out of 5 stars Synergy = more than the sum of its parts!
Reviewed in the United Kingdom on February 16, 2020
Verified Purchase
Kronos Quartet, amazing. West African musical traditions, magnificent. Put the two together and — yes, it could have been a dog's dinner, but luckily you get exceptional. HIGHLY RECOMMENDED!
Read more
Helpful
Sending feedback...
Thank you for your feedback.
Sorry, we failed to record your vote. Please try again
Report abuse

oldfellayoungman
5.0 out of 5 stars A brilliant and inventive experiment in blending musical styles.
Reviewed in the United Kingdom on August 14, 2018
Verified Purchase
A superb blend of two completely different musical traditions, played by top class musicians. West African sounds with a string quartet - quite something! The mood is one of musical adventure and exploration, and while it doesn’t always come off, the great majority of tracks are really excellent.
Read more
Helpful
Sending feedback...
Thank you for your feedback.
Sorry, we failed to record your vote. Please try again
Report abuse

SA Walkinshaw
5.0 out of 5 stars Joyous
Reviewed in the United Kingdom on February 21, 2018
Verified Purchase
Bought unheard and as a complete punt. This is everything fusion of styles should be - interesting, experimental and enjoyable. Kronos complement the wonderful rhythms bringing their own disciplined playing to the party and this gives more structure to songs. Makes me smile when I play it.
Read more
Helpful
Sending feedback...
Thank you for your feedback.
Sorry, we failed to record your vote. Please try again
Report abuse
Load more international reviews

Amazon Customer
5.0 out of 5 stars it's that GOOD!
Reviewed in Canada on November 3, 2017
Verified Purchase
you've probably read about this elsewhere. yes, it's that GOOD !
Read more
Helpful
Sending feedback...
Thank you for your feedback.
Sorry, we failed to record your vote. Please try again
Report abuse