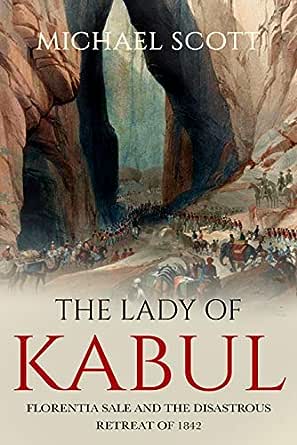 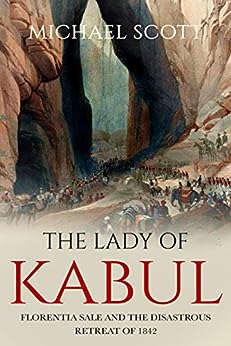 The Lady of Kabul: Florentia Sale and the Disastrous Retreat of 1842 Kindle Edition

Amazon Customer
5.0 out of 5 stars Fascinating Read
Reviewed in the United Kingdom on January 13, 2020
Verified Purchase
I read this book of Mike Scott’s account if Lady Sale while on holiday in Las Vegas

It is a fascinating account which contains an account of the outstanding bravery of the wife of a British Colonel during the disastrous retreat of 1842. It provides an account which exuded the exercising by Afghanistan War Lords of, Lust, Gluttony, Sloth, Wrath, Envy and Pride. The Seven Deadly Sins are covered in abundance. It seems that the passage of time has surprisingly taught todays Afghan Leaders,Nada, Zilch, Nothing.

Lady Florentia Sale was a match for whatever difficulty was put in front of her. She was in the absence of her husband Robert, who, eventually became a General and Deputy Commander of all British Troops. She was the leader and enforcer of all the survivors. This against foul weather and foul adversaries.

In short another captivating read the author has the reader marvelling how this women managed to survive the journey while under attack from Afghanistan’s rulers in 1842! Scott has the ingenuous has the knack of capturing the historical feature of that era encompassing the disregard for life. The deadly sins are present throughout, reverberating chapter by chapter and page by page.

I have no hesitation in recommending this to the general public. It captured me from the beginning until the end.

Nicholas
5.0 out of 5 stars Nemo Me Impune Lacessit
Reviewed in the United Kingdom on April 25, 2020
Verified Purchase
The Lady of Kabul
By Major General Michael Scott, CB,CBE,DSO

With so much time to read, while confined to barracks, may I suggest this absorbing tale, straight out of the Great Game, but not covered by Peter Hopkirk, Kipling, or even the Flashman Papers, although Kipling, over fifty years later, had he known the incredible Heroine of this story, might have applied two quotes from “If” though out of context, “ If you can keep your head, when all about you are losing theirs” or “ If you can meet triumph and disaster “. Here we have triumph and disaster, but I will leave it to the reader to seek the answer, the former or the latter, as the book reaches a thrilling climax, after the British prisoners, actually hostages, had suffered tragedy,
loss of dear ones, seen brutal killings by their Afghan captors, and other bloodthirsty tribesmen, roaming the hills, valleys, and deadly passes, sometimes piled high with the rotting bodies of their countrymen. There were horrifying wounds, including amputations, and no disinfectant, penicillin, or Florence Nightingales. Young wives gave birth, including the daughter of our Lady of Kabul, without a midwife or hot water!

This Lady was Lady Florentia Sale, wife of a British Officer, in India, who had great qualities of leadership and courage, which were shared by his wife.
But she was cut off from him, and the major forces of the two armies, the regular army, and that of the East India Company, and was stranded in Kabul, waiting for the total destruction of the British expedition, at the hands of their Afghan captors.
Their main antagonist was a certain Akbar Khan, the son of the chief whom the British did not back. He saw himself as their host and protector, and not what he was, their jailer and executioner.
The background to the intense rivalry of the ferocious tribes, the bungling of the British military and diplomats at the highest level, throw in the two most powerful empires of the day, Great Britain and Russia, backing opposing sides, and you have a tangled web which many historical writers could be happy to avoid. But Michael Scott brings this complicated development to us readers with great clarity, thanks to massive research, and Florentia amazingly, considering the circumstances, recording it all in her diary.
The book has brought us an intense and highly readable account of probably the greatest disaster in British Imperial history.
I have promised a good read, while in isolation, but unfortunately it won’t take up too much of your time, as it moves on at a swift pace, so one cannot put it down.
A worthy success to “ Scapegoats ” and “ Royal Betrayal” ( also available through Amazon)
Mike dedicates the book to the four Scots Guardsmen who lost their lives in Afghanistan in 2010, eight years after, as he writes, we should have left.

Kindle Customer
4.0 out of 5 stars Amazing attention to detail
Reviewed in the United Kingdom on March 16, 2020
Verified Purchase
This book should have been required reading for every British Officer who was being deployed to Afghanistan.
Since the first Afghan war it seems we have learned nothing about the Afghanistan mindset. The Lady of Kabul takes the reader on an amazing adventure with the Indomitable Florentia Sale. The depth of Michael Scott's research is impressive. The dates,names and places give you the sense of being there.
I read this book in one sitting and am now reading it again. Alas it seems we learned nothing of the determination of the Afghan warrior in 1842 or on the subsequent visits the British and others have made to to Afghanistan since then.
Read more
2 people found this helpful
Report abuse

Ralph Pippsie
5.0 out of 5 stars Another winner from Michael Scott
Reviewed in the United Kingdom on January 14, 2020
Verified Purchase
This is a quite excellent book. The threads of Florentia Sale's remarkable tale of survival have been woven with great skill into a rich and colourful tapestry depicting the full story of the shameful retreat from Kabul. Michael Scott has, once again, displayed his talent for minutely detailed research coupled with his no-nonsense, so very readable style. He does not shy from taking his readers on many educational, interesting journeys of discovery around the tapestry, describing events and personalities to ensure the story is told in full. He leaves no stone unturned. This a masterpiece of a history lesson. I recommend it most strongly. It would make a great film or TV series.
Read more
2 people found this helpful
Report abuse

Client d'Amazon
1.0 out of 5 stars Not really about Florentina Sale so not what it says on the tin really.
Reviewed in the United Kingdom on February 7, 2020
Verified Purchase
This book turned out to be more about military campaigns in Afghanistan during the period of "The Great Game". The author was a soldier so he spends a lot of time on military detail. I skimmed to see if there was much about Flrentina but I didn't find much so I returned the book for a refund. I am disappointed.
Read more
Report abuse
See all reviews