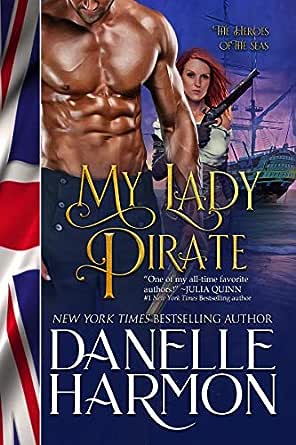 You've subscribed to A Heroes of the Sea! We will preorder your items within 24 hours of when they become available. When new books are released, we'll charge your default payment method for the lowest price available during the pre-order period.
Update your device or payment method, cancel individual pre-orders or your subscription at
Your Memberships & Subscriptions
There was an error. We were unable to process your subscription due to an error. Please refresh and try again. 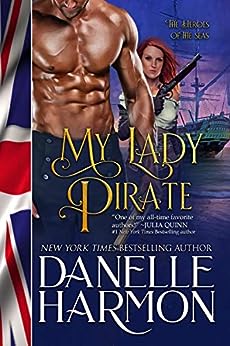 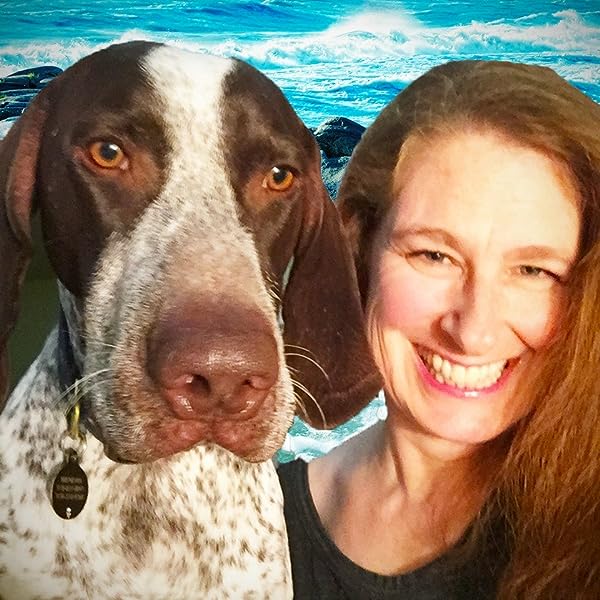 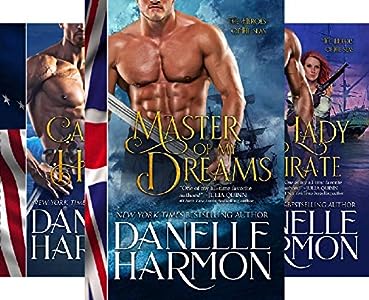 5 STARS! One of thebest alpha heroes I've ever read about! You can't go wrong with this read. I highlyrecommend it!   -- Melanie Friedman, RCJR ezine and reviewer

4.5 STARS!  "Winner of severalwriting awards, Harmon's fourth seafaring historical romance may be headed inthat same direction... The sea-faring adventures and battles keep the readerenthralled as the author takes us through that period of England'shistory with the ultimate death of their greatest naval hero of all time,Admiral Horatio Nelson."
--  Affaire de Coeur Magazine

"Danelle Harmon has once again taken us on a majestic adventure on thehigh seas. This time we plunge into uncharted waters with the all-female crewof the Kestrel, captained by theQueen of the Caribbean, Maeve Merrick... You'll love MyLady Pirate!"
-- GEnie Romance Reviews

4.5 out of 5 stars
4.5 out of 5
114 global ratings
How are ratings calculated?
To calculate the overall star rating and percentage breakdown by star, we don’t use a simple average. Instead, our system considers things like how recent a review is and if the reviewer bought the item on Amazon. It also analyzes reviews to verify trustworthiness.
Top reviews

Bren
5.0 out of 5 stars My Lady Pirate
Reviewed in the United States on July 3, 2019
Verified Purchase
I almost skipped this one because I really didn't like the idea of a foul, tough talking lady pirate being the heroine. Honestly, I would have liked her to have been a little less of one. At times, her attitude was just not understandable. Why was she so hard headed thinking her parents didn't want her anymore? She was the one who ran away, they didn't send her. And what made her think her father didn't go after her? Just because he didn't find her? She kept insisting she was a pirate but that was not her upbringing.

Oh my goodness, what to say about Gray??!! I'm swooning just thinking of him! He is one of the best book heroes I have ever read about. Because of him and Admiral Nelson this was a wonderful book! I felt like I was on their ship with them. And yes, the wedding will bring tears to your eyes. And now, I can't wait to get started on Colin's story!

Debbie
4.0 out of 5 stars Really Enjoyable book
Reviewed in the United States on October 3, 2013
Verified Purchase
Not my favorite of the series but one of the good old fashioned and very well written pirate romances. Really enjoyed the love at first sight theme & sticking to it with lots of ups & downs. Noticed some comments about the love at first sight being so unbelievable. First off, it's sad that you'd find it unbelievable. I fell in love with my true love the night we met, as did he & after a civil ceremony, we renewed our vows in a ceremony for family & friends three months later & he surprised me with a vowel renewal for our 25th anniversary almost 2 yrs ago & we're still as much in love today a we met. So from my experience ladies, it is very realistic & believable. Even so, let's not forget these are fictional stories written from a very creative mind for entertainment purposes, not reality. I really enjoyed it and was in tears by the emotional and touching ending. The only thing I didn't enjoy was the more in depth sex in this book as opposed to her other books which had some sexual scenes but not as graphic as this one. That was my only disappointment, it gave too much and didn't have the balance in that area her other books did.
Read more
2 people found this helpful
Helpful
Comment Report abuse

Booklady1
3.0 out of 5 stars great job with history, repetitious relationship
Reviewed in the United States on May 9, 2013
Verified Purchase
I do recommend this series and this book, which links the American Revolution with the Napoleonic Wars to the last. A good read despite my deducting two stars. A charismatic hero, very good character, meets supposedly hard fighting pirate lady, Mira and Brendan's daughter . A woman who can lead others and fight anyone succumbs (too) easily. Repetitive, silly arguments (takes after her mother) and sex bored me even though I really enjoyed the overall story, the hero and the imaginary interactions with Adm. Nelson. I did cry at the wedding. As in all the books in the series, the author awes me with her knowledge of ships of all types, how they are built, how they were and are sailed, all the lingo, the entire British fleet and their signals and their protocol. I don't usually like sequels, but having finished the series a bit out of order, I wish for more about the Merricks, the Lords, the Ashton's, the Falconers and the Black Wolfe and his bride.
Read more
6 people found this helpful
Helpful
Comment Report abuse

Past Romance
4.0 out of 5 stars Lady Pirates and a Hero with a Secret
Reviewed in the United States on January 2, 2013
Verified Purchase
"My Lady Pirate" is another great book by Danelle Harmon.

Maeve Merrick is know as the "Pirate Queen of the Carribean" to most, but is really the daughter of a famous American Privateer captain and his best gunner. Stealing her father's schooner and running away with a dashing Frenchman, Maeve had started out for a new life, but was quickly disappointed by her deceitful lover. She found herself alone, scorned by her parents, with nothing but her beloved ship and the crew of female misfits she rescued from various bad situtions.

To placate two of her younger crewmembers, Maeve plays along as they conjure up an ancient Celtic potion to bring her a "Knight Gallant." Moments later, a mysterious man named Gray, garbed as a pirate, washes up on her beach. He is handsome and everything a woman can desire, but is hiding an enormous secret.

This is a romance story between two stubborn, headstrong, and often violent people. At times Gray is gentle, but more often than not he is dominating and forceful. Maeve is the same and more. Don't expect too many tender moments of gentle lovemaking. It's more likely a scene will include a busted down door or a brandished cutlass. Overall, it is enjoyable though and includes a twist that the reader never sees coming!

KDB
5.0 out of 5 stars A great humorous read with full of laughs from the main two characters
Reviewed in the United States on November 21, 2014
Verified Purchase
I loved every bit of the book - the story and it's characters, but most of all I loved Sir Graham 'Gray' Falconer. He was a loveable hoot from the beginning to the end. I loved his playfulness and humor - so much so that at certain scenes I had tears swelling up in my eyes from fits of giggles (especially when Maeve found him unexpectedly in her bed) and his undieing persistence when it came to wooing and convincing Maeve that he was indeed her gallant knight she wished for. There wasn't anything he wouldn't do to win her heart - even going to great lengths as embarrassing himself when scaling her window at night and mistakenly ending up in an elder lady's room instead of Maeve's. As always, I love all of Danelle's novels and I definitely LOVED My Lady Pirate.
Read more
One person found this helpful
Helpful
Comment Report abuse

innerdragon
4.0 out of 5 stars Great tale
Reviewed in the United States on June 20, 2018
Verified Purchase
The hero fantasized about pirates and even imagines himself a pirate. The heroine is the real thing, with a band of female pirates to boot. The fantasy makes him fall in just and in love until he realizes she isn't just playacting like he is. Eventually there is a happy ending but there is the usual angst until then. A good story, with a trifle too much sex to make it five stars but I realize that is a matter of taste for some
Read more
Helpful
Comment Report abuse

Kindle Customer
5.0 out of 5 stars Wild sea adventure
Reviewed in the United States on October 9, 2020
Verified Purchase
Anytime this author sets sail you know you're in for romance and adventure on the high seas
Read more
One person found this helpful
Helpful
Comment Report abuse

S Harper
1.0 out of 5 stars rubbish
Reviewed in the United Kingdom on March 20, 2014
Verified Purchase
Silly plot with farcical language. A real effort to read. Turning the pages got harder and harder until I just stopped and put the book down . A month later with nothing else to read, I picked up the book again and struggled on. Funnily enough the last third of the book is the best part but do you really want to wade through an awful book for such little reward.
Read more
Report abuse

Kindle Customer
5.0 out of 5 stars Amazing read
Reviewed in the United Kingdom on July 10, 2014
Verified Purchase
Really good read. I am currently reading my way through the heroes of the sea collection and although I have loved everyone its definitely my favourite so far. Worth a read even if its the only book out of the 6 you read. Danelle Harmons writing style is easy to get on with aswell as being exciting. Definitely worth a 5* and I cannot wait to read another of her books.
Read more
One person found this helpful
Report abuse

val atterbury
5.0 out of 5 stars Five Stars
Reviewed in the United Kingdom on June 4, 2018
Verified Purchase
Excellent reading and the history along with the story
Read more
Report abuse

Jella
5.0 out of 5 stars Five Stars
Reviewed in the United Kingdom on October 13, 2014
Verified Purchase
Enjoyed this on too as well as the rest of the series
Read more
One person found this helpful
Report abuse
See all reviews