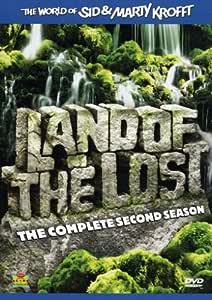 Land of the Lost - The Complete Second Season

It's time to get "Lost" all over again. But be on guard! Keep your eyes peeled for Sleestak! Because the big green meanies are back - now even more dangerous than ever before. You'd best watch your step or you just might find yourself standing alone before the dreaded Library of Skulls- and that's but one of the many perils awaiting you in this second spine-tingling season of the legendary Land of the Lost.

Bill Boozer
4.0 out of 5 stars BEWARE OF SLEESTAK
Reviewed in the United States on August 8, 2015
Verified Purchase
Watching Land of the Lost on Saturday mornings with a big bowl of Captain Crunch is one of my most cherished memories from my childhood. After ordering this DVD set, I have to say that the series has held up amazingly well for a kid's show from the 70's. As an adult, I can appreciate the incredibly imaginative and surprisingly well written sci-fi stories that drive the adventures of the Marshalls. Plus, the kid in me is still giddy every time Grumpy the tyrannosaurus and all of the other brilliantly animated creatures show up. There is definitely some cheese , as was prevalent in most 70's era TV shows, but it never diminishes all of the things that made this show great. The only reason that I didn't give it a full five star review is because this isn't the older Rhino Video release that had loads of great extras. There are no notable extras in this set. It's really a shame because I've read great things about the cool commentary and other extras in that set. In any case, the episodes themselves are still fantastic, and that's all that really matters.
Read more
2 people found this helpful
Helpful
Comment Report abuse

🌈 KT
TOP 1000 REVIEWERVINE VOICE
5.0 out of 5 stars Good to see, but I'd forgotten how bad the "special effects" were. Still think these are great for kids, tho.
Reviewed in the United States on November 29, 2016
Verified Purchase
Probably going to give these to my twin 8 yr old neice and nephew, though I actually bought these for myself. I used to love this show, and there were several I missed. It came up in a conversation lately so I went looking and found these.

I was prepared for a poorer quality video, given the age of this. There's only so much you can do to fix that. What I wasn't prepared for (but should have been) is the really, really bad "special effects". I didn't really notice it as a kid, and didn't think about it till I saw these.

Don't get me wrong, I'm glad to have them to see in order, especially the ones I missed, but it's not a situation where I'll want to rewatch, so off to the twins. I think it's a great show for their ages anyway. Much better than the slap-together stuff I see sometimes these days.

I'm good about updating if there are any quality issues that pop up. Any questions, feel free to comment or email.
Read more
One person found this helpful
Helpful
Comment Report abuse

Michael Valdivielso
5.0 out of 5 stars Second Season is even better.
Reviewed in the United States on January 25, 2007
Verified Purchase
Return to the Land of the Lost, with the Sleestaks, the Lost City and the Pylons. But now add such great ideas as the new alien called the Zarn, the Library of Skulls and the Mist Marsh. With writers such as Theodore Sturgeon and the return of such actors such as Walker Edmission who plays Enik the second season is even better. The unlimited imagination and the advanced science fiction plots are piled onto the solid framework from the first season. Like a good cake that finally gets some home made icing.

But we also see the evolution of the family. They are working together to survive - the cave has a lived in look, the ropes and pulleys they have made, the new tools and even clothing they have created. They show us how the Marshalls test new plants and food on animals and deal with daily life. They wish to escape yet at the same time try to make the Land of the Lost a home.
Read more
4 people found this helpful
Helpful
Comment Report abuse

Guy
3.0 out of 5 stars Bad Release From Universal Studios
Reviewed in the United States on June 1, 2011
Verified Purchase
I was born in 1973, so of course I grew up watching Land Of The Lost and loved it! A few years ago, I was elated to learn that this series was now available in a DVD collection, by Rhino. I bought the complete first season and enjoyed reliving my childhood. However, recently I tried to purchase season 2 and 3 and ran into a dilemma. I had the choice of buying the remaining seasons from the Rhino collection, as before, or from a new collection put out by Universal Studios. I searched all the reviews on Amazon to determine which release was better and to make sure the new Universal releases had good special features like all the commentary the Rhino releases had, but could not find one review that would say one way or the other. I finally gambled and went with the newer releases by Universal because they had better looking covers compared to the Rhino releases and I was thinking "newer release should equal better." I quickly learned, after they were delivered, that the cover-art was where Universal's superiority ends. The Universal releases basically did not have any special feature except for a short interview with Sid and Marty Krofft at the end of Season 3.

Also, as if that wasn't enough, the menu interface was so bad and unfriendly that whoever designed it should probably be fired. The menu would have only three or two episode thumbnails on each menu page, and they were arranged in a way that made it difficult to move and highlight one episode to the next or to select the "more" link. The cases are also difficult to put back into the main case. After I received my Universal DVDs and discovered how bad they were, I did an online search (outside of Amazon) and finally found reviews telling me what I'm telling you now. I wouldn't recommend buying the Universal releases unless you're a major collector and want them for the cover-art or don't care for the special features the Rhino collection has. This is one of those rare cases when the newer release is not nearly as good as the older release. I hope this helps someone avoid making the same mistake I made. Hopefully, I will be able to sell my Universal releases (at a really low price) to someone who doesn't care about the differences. I have since bought season 2 and 3 from Rhino and enjoy them very much!

By the way, I was also profoundly disappointed in the new Land Of The Lost movie, starring Will Ferrell. I could have written a better script in my sleep, casted better actors more suitable for those characters, and directed a far better film, even though I've never directed a movie before in my life! Here's a clue to those who made that movie. The series has always been viewed by the original fans as creepy and scary! It was never meant to be turned into a comedy!
Read more
5 people found this helpful
Helpful
Comment Report abuse

Richard A. Bailen
5.0 out of 5 stars Great show for kids and their dads!
Reviewed in the United States on May 6, 2013
Verified Purchase
We had so much fun watching this series- all 3 seasons! Kids love the dinosaurs and sleestacks and Chaka! Dad (I) loves the scifi elements and reliving this great show from his childhood! The Rhino releases of seasons 1-3 featured a plethora of fun interviews and commentary tracks for fans. Kudos to Rhino for putting those out and doing such a nice job on those. The current DVD sets are great for casual fans or to keep these fun shows circulating in the rental market. Yeah!
Read more
Helpful
Comment Report abuse

Denise
5.0 out of 5 stars Great buy
Reviewed in the United States on December 27, 2017
Verified Purchase
What a great blast from the past! So much fun to sit and watch the shows I grew up with. Very pleased with the quality.
Read more
Helpful
Comment Report abuse

Jen T.
5.0 out of 5 stars Five Stars
Reviewed in the United States on July 14, 2018
Verified Purchase
Loved it as a kid, and now my kids watch it.
Read more
Helpful
Comment Report abuse

Amazon Customer
4.0 out of 5 stars Good and not so good
Reviewed in the United States on October 18, 2011
Verified Purchase
I have loved this series since a small child so I went ahead and purchased these. Originally I had bought the 1st season Rhino version release which was superior to these new Universal discs in many ways. I'm kicking myself for not buying all the Rhino versions 10 years ago. Almost Impossible to find those now and expensive. The Universal disc are completely passable but very plain packaging with no extras or commentary. I don't think the picture quality is as good either.
Read more
Helpful
Comment Report abuse
See all reviews

Page 1 of 1 Start overPage 1 of 1
This shopping feature will continue to load items when the Enter key is pressed. In order to navigate out of this carousel please use your heading shortcut key to navigate to the next or previous heading.
Back
Next
Pages with related products. See and discover other items: lost tv show