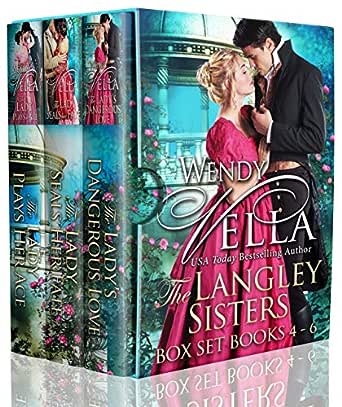 You've subscribed to The Langley Sisters Collection! We will preorder your items within 24 hours of when they become available. When new books are released, we'll charge your default payment method for the lowest price available during the pre-order period.
Update your device or payment method, cancel individual pre-orders or your subscription at
Your Memberships & Subscriptions
There was an error. We were unable to process your subscription due to an error. Please refresh and try again. 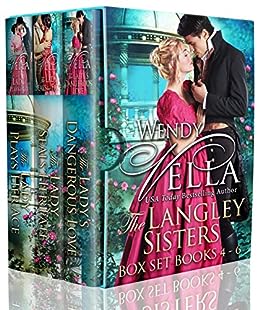 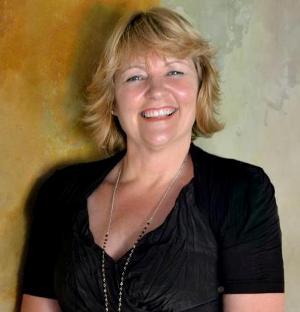 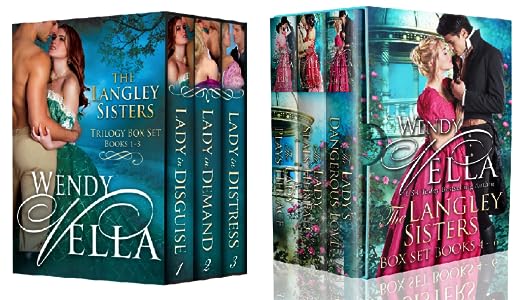 C. Potts
4.0 out of 5 stars Two Good, One Disappointment
Reviewed in the United States on July 20, 2020
Verified Purchase
The Lady Plays Her Ace: Oliver “Ace” is a man who has made his fortune the hard way. He began with his fists, then by learning to be both a gentleman and a businessman before entering the fringes of London society. He is ruthless, determined and trusts only a select few. Lady Althea “Thea” (friend of the Langleys) is the only one person who unsettles his world. She is feisty, opinionated and beautiful. As a duke’s daughter, she is far above his reach. Determined to put distance between them, he pushes her away. Thea pushes right back, not willing to be set aside. Ace soon realizes that walking away from her is going to be the hardest challenge he has ever faced. – Althea was outspoken, brave, and unlike other ladies of the ton. She and her brothers were friendly with staff and others who most of the ton considered beneath them. Ace had a difficult time accepting that, and it caused problems. The first two-thirds of the book were very slow. I loved the last third. It was entertaining.
The Lady Seals Her Fate: Thing were not going to plan for Hannah. There was the small matter of a blackmailer to contend with, her father increasing her dowry so she could marry and of course Alexander. He is titled and handsome, has society at his feet, and she recklessly coerced him into playing the part of fake beau. Things rapidly went downhill from there, and she was soon in over her head, trapped in a web of deceit. She witnessed a murder, and she left London to keep Alex safe. Hannah soon realized that in doing so she left behind the only man she will ever love. – Hannah was witty, independent, and fun. I loved the friendship between Hannah and Alex. He was sweet, attentive, and respectable. I enjoyed the story.
The Lady’s Dangerous Love: Benjamin, determined and dashing, vowed that he would never give a woman the power to hurt him again. He succeeded until Primrose came stomping into his life. She has too much to say and is nothing like any debutante he ever met. She seems not to give a fig about proprietary. Ben fights the emotion she provokes in him by pushing her away. Too late, he realizes that in Promise he found someone that may heal the dark stain on his soul. - Primrose was an interesting character. She was not the typical woman of that era. She and Ben both had shortcomings to overcome, and they helped each other. I liked them, his siblings, and the lady who was sponsoring her. This is a good read.
Read more
Helpful
Comment Report abuse

SheSellsSeashells
VINE VOICE
2.0 out of 5 stars Rolling my eyeballs...
Reviewed in the United States on July 17, 2020
Verified Purchase
Three books in this set.
Book 4. The Lady Plays Her Ace
The whole thing goes like this:
Hero: "I'm just a coal miner's son. I'm not good enough for you!" (even though he's a self-made millionaire.)
Heroine: (rolls her eyes and folds her arms across her chest.)
Hero: I think you're pretty hot.
Heroine: I think you're pretty hot too.
Hero: "But I'm just a coal miner's son. I'm not good enough for you!"
Repeat 9,000 times. Or maybe it just seems that way.
[Big Spoiler ahead!]: Hero reveals deep, dark secret -- he inadvertently killed a man!
Page 175: "I threw a punch and John Blackheath fell, and I thought I had knocked him out, but in fact, I had killed him." The story goes on. Someone is trying to kill the hero. Oh no! Then on page 219, a person named Angelique reveals who is stalking our hero: "Oliver, it's John Blackheath!"
Got that? The actual dead man, not his brother Jacob, is stalking the hero. OK... Hello? Hello? Beta readers? Proof-readers? Editor? Anyone there? Apparently not.

Book 5. The Lady Seals Her Fate
I read this only two days ago, and already can't remember the plot. Gave up a short way into the story because (like the first one) it featured endless repetitions of the same thoughts over and over and over and over... Yes, yes, we got it the first time, thank you.

Mary J. Aigner
5.0 out of 5 stars Enjoyable
Reviewed in the United States on July 3, 2020
Verified Purchase
I’ve read others by this author and I liked recognizing other characters who appear on the periphery of the main story. Each book of the three had twists and turns, all different, and all interesting. Of course, love always wins out.
Read more
Helpful
Comment Report abuse

Kindle Customer Shelby
5.0 out of 5 stars Sisters win
Reviewed in the United States on August 1, 2020
Verified Purchase
I always love when a series revolve around sisters, family or close friends. As this in that venue I think you will find it very enjoyable! Even find out when they have children which I like to know how things work out.
Read more
Helpful
Comment Report abuse

carol
4.0 out of 5 stars Easy read
Reviewed in the United States on June 29, 2020
Verified Purchase
This author does such a nice job of mixing into her story theme a combination of intrigue and humor and a variety of well developed characters. All ends happily ever after
Read more
Helpful
Comment Report abuse

Fantastic item and company is excellent. Am giving me a new one. I thank you very much to the pool company ,for a most professional return policy.
5.0 out of 5 stars Can’t put down book
Reviewed in the United States on July 29, 2020
Verified Purchase
I love this author! Her stories are fun, interesting and so involving. She keeps you interested in all the characters !I just want to read more!
Read more
Helpful
Comment Report abuse
See all reviews from the United States