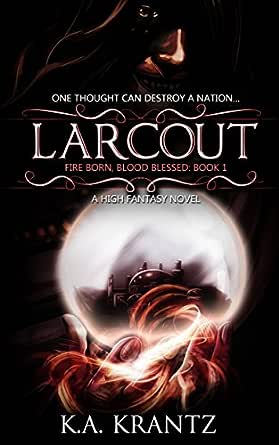 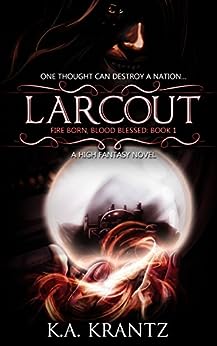 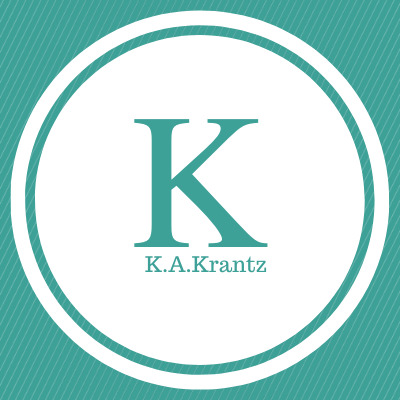 KAK splits her time between Cincinnati and the DC ‘burbs with her ever-faithful, hairy beast. When not writing, she indulges in a shoe obsession, conducts a love/hate affair with a paint brush, and pretends she has enough upper body strength to wield power tools. --This text refers to the paperback edition.

Chance Encounters
5.0 out of 5 stars Game of Thrones meets Clash of the Clans, with a heroine who kicks serious ash.
Reviewed in the United States on June 1, 2015
Verified Purchase
This book, the first in the Fire-Born, Blood-Blessed series, reminds me why I absolutely love epic, alternate universe fantasy (and I mean EPIC - it's 145,000 words, and every last one is worth reading). It introduces an entirely new world for readers to explore - from the murderous mountains of Agenwold to the black-sand-swept Larcout, its people safe (for the moment) behind their glistening transparent sphere. It hints of new realms to discover as well: the water and metal domain of Jos, the harsh tundra of Nivurn, the lush jungles of Kethor.

The story is at once grounded and cut loose by Vadrigyn, a warrior half-breed who has survived on the brutal slopes of Agenwold with pure grit and fury - she alone among her people was born without wings, a legacy of her hated mother, a Larcoutian witch who has betrayed Vadrigyn at every turn. She alone does not bleed fire, but smoke. She alone sees the value of treating her captives humanely--and intelligently. To keep her holdings secure and ensure the safety of her fire line, she must battle her own people daily, using her wit and keen resourcefulness to succeed. It's a life defined by Vadrigyn's own mantra: Live. Learn. Burn.

All of this changes when a clash with a rival fire line grows so fierce that even the gods take note: Vadrigyn finds herself thrust into the opulent, domed world of Larcout, her mother's homeland, with a mission that could end in destruction... or absolution. There, she finds more than she ever expected among the soft-skinned, high-mannered Larcoutians. Betrayal and danger, yes - but also comrades. A purpose. And a connection to a people she has shunned her whole life. But Vadrigyn is not only linked to the world of Larcout... and neither is she necessarily its savior.

Between the multi-layered, eye-popping world building, the believable emotional and physical stakes and the completely gonzo battles that Vadrigyn is all too willing to leap into - complete with sentient weapons embedded in her palms - LARCOUT is a brilliant leap into a new series, and a book I wanted to re-read as soon as I finished it the first time. **Loved.**
Read more
4 people found this helpful
Helpful
Comment Report abuse

McPig
5.0 out of 5 stars Great World Building and an Engaging Story
Reviewed in the United States on July 22, 2015
This is a really cool Fantasy read.

Vadrigyn is an unusual, but great heroine. She's without guile and used to using her strength and the poisonous parasites that live in her body to survive. But then she is taken from the kill or be killed world she grew up in and lands in a world where intrigue and deceit are the weapons of choice. She has to learn how to find her place in this world to keep alive.

I love the world building in this book. The different Gods and races are really interesting and intriguing. This book focuses most on the Larcoutians and the Morsam, but the glimpses that were given of the other races were really cool as well. I hope there will be more of them in the next book.

The magic that is used by the Larcoutians and how their society deals with that magic is well worked out and believable. Their society is a scary and brutal one beneath the civilized surface in my opinion. I enjoyed how you slowly find out more and more about Larcout.

The story is complex and the secrets Vadrigyn is trying to uncover are dangerous. I was hooked from the start and kept trying to figure out what was going on and who was to trust. There were some really likeable characters, and some that I loathed. At times I was really nervous about the safety of my favorite characters.

The names that are used aren't common names and took some getting used to, but they were all different enough that I didn't have to track back to figure out who's who, like sometimes happens when an author uses names that sound too much alike.

All in all this is a really great Fantasy read, filled with conspiracies and cool action. I'm looking forward to reading the next book, to see what happens next for Vadrigyn.
Read more
Helpful
Comment Report abuse
See all reviews

badger
5.0 out of 5 stars Great read
Reviewed in the United Kingdom on January 29, 2016
Verified Purchase
My son said it was a great read. He is 18
Read more
Report abuse
See all reviews