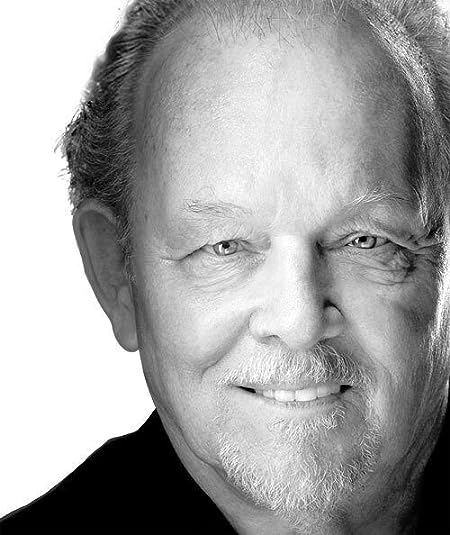 Larry J. Dunlap is the author of NIGHT PEOPLE, Book 1, and ENCHANTED, Book 2, of Things We Lost in the Night, A Memoir of Love and Music in the 60s with Stark Naked and the Car Thieves. His short stories have appeared in: 2012 WRITING FROM INLANDIA (2015) and HERE COMES THE SUN (2017).

In the years following his memoir, Larry spent most of the 70s in Hollywood as a personal manager, publisher, and Sunset Boulevard recording studio owner/operator. He also reviewed live-music performances in his column NIGHTWORK for AFFAIR Magazine and wrote and drew a music-based comic strip called FRETS for "Inside" Magazine. In the 80s Larry co-founded the first all-digital broadcasting network, followed by a number years in video and film production, and post-production. Larry's professional writing career began as a pencil-for-hire, technical and training writer for Fortune 50 companies in the 90s.

Larry's favorite project has been imagining a galactic empire with a detailed history and backstory. He designed the gameplay and delivery system and worked with his team to develop a breakthrough graphical multiplayer online strategy game, IMPERIAL WARS. Don't be surprised to see stories soon from this long-imagined universe in the near future. Currently, Larry writes from his home near the ocean in Southern California where he counts his blessings and shares his life with his wife Laurie and their Chilidog.

Find out more about Larry and his writing at http://larryjdunlap.com Contact him at larry@cvppress.com 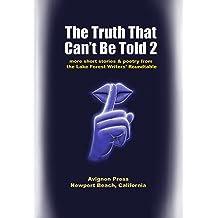 Unrequited love, quiet shame, guttural fear are the truths we hide from the world…often from those we love the most.

In their second book, The Truth That Can’t be Told 2, the writers of the Lake Forest Roundtable explore ideas in short stories and poems about the hidden parts of our humanness–our hearts and minds examined in ways that will move, and sometimes, embarrass you. Deceit lives in all of us, and this collaborative group takes on the challenge of exposing those guarded truths. The result is exciting, intimate, and daring, but with the power to make us stronger, closer, and more human.

You’ll delight in stories that range from baseball tales to mysteries, family dramas, war stories, sci-fi, and fantasy, with literary pieces and a collection of poems among them. Whether you laugh out loud or shed a tear, this collection will connect with the hidden something inside each of us. 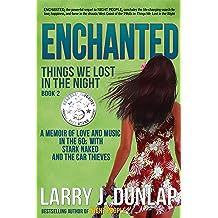 ENCHANTED: Things We Lost in the Night (Things We Lost in The Night, A Memoir of Love and Music in the 60s with Stark Naked and the Car Thieves Book 2) Jan 23, 2019
by Larry J. Dunlap
( 7 )
$5.99
It began as a simple idea, the retelling of the four of us from Indiana’s musical adventures in the wild and chaotic West Coast of the mid-1960s for friends and family. It turned into a memoir of our story as seen and experienced through my eyes, and–in the end, it became what it had always been--A LOVE STORY.

ENCHANTED, BOOK 2 OF THINGS WE LOST IN THE NIGHT CONCLUDES A FAST-MOVING, ROMANCE-FILLED MEMOIR of a young singer and his friends search for success in the 1960s music business of California and Las Vegas - if you liked memoirs from Carly Simon, Keith Richards, Patti Smith, Tommy James, and "The Wrecking Crew," you're sure to enjoy Night People.

In the final three years of Things We Lost in the Night, the band’s trajectory continues to rise as their latest record is expected to debut high on Billboard Magazine's Hot 100. In Hawaii, Larry encounters a life-threatening moment, and an indelible romantic fantasy, experiences on this beautiful and exotic island during the Vietnam War change his life in many ways. The following homecoming trip to perform in Indianapolis is far less satisfying than he’d expected, and a national tragedy affects the hit record everyone expected. But the band’s appearance successes continue to soar as they headline in a Las Vegas nightclub with famous bands like Sly and the Family Stone and discover that their band has become the model for the latest supergroup, Three Dog Night.

Though the recording success they’d hoped for hasn’t materialized yet, the Flamingo Hotel has booked them on a long-term contract to play in a dance/showroom designed and built especially for them, the Sky Room. Here they perform for the biggest stars in the world, including Tom Jones and Elvis Presley, and play with internationally famous musicians who come to sit in with them. Larry feels he’s living a romantic fairy tale with his new wife and baby son and has been given a second chance to redeem the failure of his first marriage.

When the Flamingo’s owner completes construction of the new International Hotel, the world’s largest resort casino, Elvis Presley is booked in the main showroom to begin his legendary climb to superstardom in the city that never sleeps. Stark Naked and the Car Thieves is chosen to simultaneously open the Crown Room at the top of the new hotel, in a venue similar to the Sky Room. After another record release fizzles, the band is becoming frustrated with their progress as recording artists.

Though they have been chosen by Capitol Records to record the theme song for an upcoming major movie, Larry realizes their options are limited by the band’s inability to create their own original music, their own sound. Their disappointment compounds when the movie fails to be completed. Forces are at work to implode the band as Larry is ever more determined to find new ways to develop the band’s creativity. During a scheduling mixup that results in another trip to Indianapolis, a crisis arises. His new wife and son are missing. He faces severe threats to his life and sanity as he attempts to recover his family and keep his band together.

"Whether or not you remember the swift intoxicating music of that era or the seismic shift of mores that burst from the free-love movement, [NIGHT PEOPLE] captures the beat of that misty time when the country suffered "a growing thirst for individual freedom, a desire to escape from an ever-darkening shadow of war, and a national hangover following the public murder of a young and popular president." -- C.D.
Read more
Other Formats: Paperback 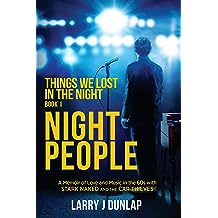 NIGHT PEOPLE: Things We Lost in the Night (Things We Lost in The Night, A Memoir of Love and Music in the 60s with Stark Naked and the Car Thieves Book 1) Jun 15, 2015
by Larry J Dunlap
( 83 )
$5.99
IN BOOK 1, NIGHT PEOPLE, THIS FAST-MOVING ADVENTURE AND ROMANCE-FILLED MEMOIR THAT READS LIKE A NOVEL, a young Midwestern singer and his friends experience the transformative power of love, loss, and music in a chaotic West Coast adventure in the1960s. If you liked memoirs from Bruce Springsteen, Robbie Robertson, Carly Simon, Keith Richards, and Patti Smith, you're sure to enjoy NIGHT PEOPLE.

"The punishing schedule we'd endured had been a crucible, forcing us to learn how to rely on one another, to develop discipline, and set an expectation that each of us would do our best under the most difficult conditions. Like anyone else with a job, some nights were better than others, but we never quit trying. Somewhere along the way, I realized with pride,we'd transformed ourselves into professionals."

In 1964, Larry's rock and roll vocal group is disintegrating along with his marriage to his high school sweetheart. Despite his resolve to turn his life around in Indianapolis, he finds himself reunited with his scattered-to-the-winds friends in distant San Francisco, struggling to make themselves into a rock band in the dive clubs of the Bay Area.

Barely surviving the transformation, they struggle to avoid the dangers, temptations, and insecurities waiting to trip them up in their new life. As the band scrambles to overcome, or at least endure, every obstacle in its path, Larry faces a painful choice that will result in loss for those he loves no matter how he decides.

Their strong voices and new skills are a potent combination. Soon, Larry and his new band are plunged into a breathtaking journey through mob-run nightclubs, Las Vegas showrooms and backrooms, famous Hollywood night spots, top West Coast recording studios, celebrity managers--and passionate romance. Everything they've ever dreamed of is just around the corner.

Night People's adventure is set against the backdrop of the West Coast in the mid-60s: a historic era of tectonic cultural, political, musical, and sexual upheaval--and the draft. In the tumultuous nights the band inhabits, where things and people are too easily found and lost, everything Larry thought he knew about life, love, and himself is challenged.

"Dunlap's sense of transcendence is similar to the sensation Keith Richards describes in his memoir, 'Life: ' ...you leave the planet for a while...' Reliving his rock and roll years in his wonderful memoir, NIGHT PEOPLE,' Larry Dunlap must have left the planet for a while, too." I loved it and highly recommend it. -- Kiana Davenport, The Spy Lover, Shark Dialogues

"Whether or not you remember the swift intoxicating music of that era or the seismic shift of mores that burst from the free-love movement, [NIGHT PEOPLE] captures the beat of that misty time when the country suffered "a growing thirst for individual freedom, a desire to escape from an ever-darkening shadow of war, and a national hangover following the public murder of a young and popular president." -- C.D. Quyn, Steph Rodriguez, Manhattan Book Review

WHAT READERS ARE SAYING
One of the best biographies written by a musician!
A Riveting, Mythic, Rock & Roll Memoir
Wonderful!
Excellent!
Thoroughly Entertaining.
Read more
Other Formats: Paperback 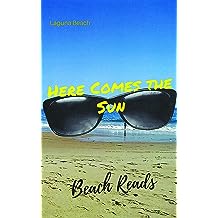 This anthology of thirty short stories, personal essays, and poetry explores the sun as an agent of transformation. An ill-fated sunset swim. A weekend rendezvous with a childhood idol. A cliffside life-and-death struggle. The quest for the perfect golden tan. All of these moments and more await in Beach Reads: Here Comes the Sun.

Beach Reads: Here Comes the Sun was compiled by Third Street Writers, Inc. Established in 2015, Third Street Writers fosters the growth of literary arts in Laguna Beach, CA. It promotes the development of new and veteran writers by providing opportunities to study, produce, and celebrate all forms of literature.