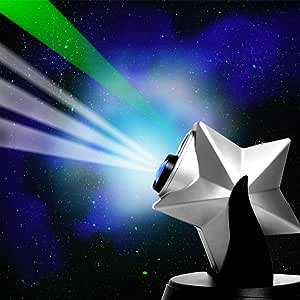 Laser Star Indoor Light Show is so easy and fun to use! Fill the room with thousands of Stars with an all new green laser technology. Class II Laser Product - this 10 watts projector is adjustable, pivots and includes a 4 hour timer.

4.0 out of 5 stars
4 out of 5
673 customer ratings
How does Amazon calculate star ratings?
Amazon calculates a product’s star ratings based on a machine learned model instead of a raw data average. The model takes into account factors including the age of a rating, whether the ratings are from verified purchasers, and factors that establish reviewer trustworthiness.

pillpusha5
5.0 out of 5 stars A lava lamp for the ceiling, not useful for real stargazers
Reviewed in the United States on January 12, 2017
Verified Purchase
So this is my third star projector from Amazon. The first was one of those 14$ specials which stopped working within hours - FAIL!!!! The second was the Homestar Classic. This was such a disappointment, you could barely see the stars even in a pitch black room - FAIL #2!!!!! Finally this light works! I absolutely love it. I guess my biggest complaint is that the stars are green instead of yellow. But when you turn on the blue nebulous feature, it's really quite striking. If you are looking for a realistic star projector, do not buy this. This is more for mood lighting than for the hobby astronomer. I'm sure kids will love it, but I don't own any to test it out on. Another feature I don't care for is the timer. It will only run for two hours and I would love to have it on all night. According to the instructions, this is done to protect the laser so I guess it's for the best. The projectors brightness is excellent. The pictures I have it set up in my main living area and the ceiling slopes up to 30 feet at it's highest point. The projector makes a beautiful show in this massive area. It would probably be really amazing in a normal sized room. It's almost like having a lava lamp on your ceiling.
Read more
20 people found this helpful
Helpful
Comment Report abuse

Deborah G.
5.0 out of 5 stars Started from the bottom now we're here 😎
Reviewed in the United States on February 26, 2016
Verified Purchase
This is by far the coolest thing I have ever bought in my life. I grew up with stick on glow stars and now I get the adult upgrade. Seriously spark one up and listen to Dreamweaver while staring at this it's life-changing I promise.
Read more

Gadgetry Guy
4.0 out of 5 stars An entertaining night show
Reviewed in the United States on January 29, 2016
Verified Purchase
This is an intriguing light show for kids, and anyone who enjoys starry nights. But how does it compare to a REAL night sky?

Dozens of green laser "stars" of approximately 6 different sizes/brightness levels are projected as a starry night pattern onto a ceiling or wall. The biggest, brightest star, right in the center of the projected sky, is completely stationary, as are most of the second-brightest stars that surround it in various "clock-like" intervals. Stars of other sizes and brightness levels span across the sky, with most of the stars moving at various speeds. Each moving star seems to be traveling in its own direction and speed, which makes for a very relaxing effect. Astute observers will notice that most of the stars travel in circles of various diameters and offsets, although it takes several minutes of observation to comprehend the patterns.

This projector looks especially impressive when used in areas with high ceilings, such as sun rooms.

Astronomy fans such as myself would probably prefer that the light show didn't come with the brightest and second-brightest stars; they are incredibly bright, almost lighting up the whole room, and distract from the prettiness of the rest of the stars. It would also be amazingly realistic if there was an option to have the star motion more accurately reflect the slow, boring pace of stars across the real night sky. As it is, the projected star field looks more like a petri dish of slow, microscopic organisms swimming every which way. It's still pleasing to watch, though, and kids especially love it.

The "nebula cloud" feature was honestly more interesting than I thought it would be. For "realistic" starry nights, I keep the nebula projection pretty dim, but my kids love it when I crank the brightness all the way up, where the shimmering nebula pattern almost looks like a Star Gate from the TV series of the same name. I find the star field more interesting with the nebula cloud on rather than off, even though I originally anticipated that I would always keep that feature off.

I'm really glad that these newer projectors come with independent 4-hour auto-shut-off timers, one for the star projector, and one for the nebula projector. People who had older versions of the projector, without the timers, apparently ran into problems where the projector eventually overheated and died. During my usage, the projector never got hot, and the built-in cooling fan was relatively quiet the whole time.

Now some words of precaution. The star projector is essentially a Class II laser, and it's very important that no one looks directly at the "stars" (i.e. laser beams), especially children. When situating the projector on the floor, pointing upwards to the ceiling, it's very important to make sure that young kids know to not look at the projector lens, even by accident. Under ideal circumstances, children would not be left unattended with this projector. Realistically speaking, however, you'll probably be fine if you situate the projector high enough off the ground (for example, on a book shelf or dresser), and point it straight up towards the ceiling so that the children couldn't walk across the laser-beam line-of-sight even if they tried. This is especially important for people who are tempted to use the projector as a "night light". You don't want kids getting up to use the bathroom in the middle of the night and accidentally stumbling into the projector beams.

Another important consideration is to make sure the stars do not reflect off shiny surfaces and into the eyes of people, or shine out a window or skylight where the laser beams may strike passersby or interfere with aircraft. Remember, the stars move. If a star wanders across the ceiling and shines out a skylight and into the eyes of a flying pilot, you may be held responsible with serious legal ramifications. Also warn children to not hold objects in front of the laser beams, as the lasers might reflect into people's eyes.

Overall, the quality of this projector is just right for its price. The projector exterior is constructed out of light but durable materials, and will probably last a long time if kept safe from accidents.

Firefly
5.0 out of 5 stars Beautifully hypnotizing
Reviewed in the United States on February 16, 2017
Verified Purchase
I bought this as a birthday gift for a close friend. I surprised him by having him stay in his room while I set this up in the living room and lead him out to it with his eyes closed and revealing it to him already turned on. This laser machine is GORGEOUS. I purchased the 2 year warranty for it because of the reviews about it not working. It's been 3 years now and my friend has never said anything to me about it malfunctioning, so as far as I know it still works. I'm thinking about buying one for my boyfriend and I. This is an amazing item to just lay down and stare up at or meditate with or have turned on for parties, very relaxing and beautiful.
Read more
13 people found this helpful
Helpful
Comment Report abuse

Patsy Farrow
5.0 out of 5 stars Very, very happy
Reviewed in the United States on January 4, 2020
Verified Purchase
This was a well thought out choice. Not wanting to give a poor quality gift I read reviews, watched YouTube videos, etc. We really like this product. I tried it out before I wrapped just in case it was disappointing. I was blown away.
The unit itself is very light weight plastic but no problems. Assembly was simply plug in and turn on. We put it atop a small container near the floor...it projects across the entire ceiling and down the walls .
My son has it in his basement so it is dark. He loves the "cloud" scene. Big hit with his teen friends.
Read more
3 people found this helpful
Helpful
Comment Report abuse

Cbreeze
5.0 out of 5 stars Best gift you can get a young child!!! Hands down!!!
Reviewed in the United States on January 8, 2020
Verified Purchase
Second purchase for a family member. I cant say enough except This Product is fantastic! The kids love it!!!!! The adults love it too! Buy a timer and watch your kids room look like your sleeping out in the fields on a starry nite! The machine is silet and has a slight hum, which lulls the child to sleep. IF you put a timer you can have it run from 9pm to 1pm, the child will be out cold by then. Sleeping under the blissful starry nite is all the remember. Fun for all ages.
Read more
2 people found this helpful
Helpful
Comment Report abuse
See all reviews from the United States

Page 1 of 1 Start overPage 1 of 1
This shopping feature will continue to load items when the Enter key is pressed. In order to navigate out of this carousel please use your heading shortcut key to navigate to the next or previous heading.
Back
Next
Pages with related products. See and discover other items: blue laser pointer, ceiling light show projector, christmas star lights, smart key, star constellation, star projectors