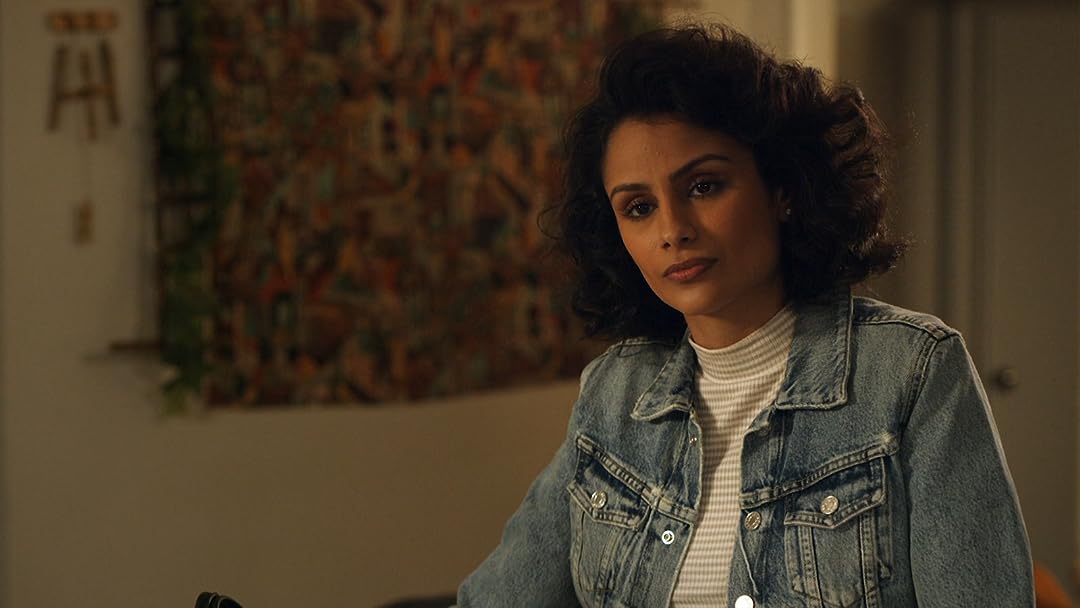 (228)
1 h 25 min202013+
The Sikand family learns that their only hope of continuing their "ancient bloodline" is their skeptical gay daughter Savarna.

MC HarrisonReviewed in the United States on October 25, 2022
5.0 out of 5 stars
Surprise Ending
Verified purchase
Because the author/director is an acquaintance of mine, I was interested in watching “The Last Conception”. Let me begin by confessing my lack of knowledge regarding Buddhism and if some of my comments seem inaccurate this might be the problem. The movie has many good qualities. The acting is believable and accomplished. The lead star is beautiful and I have no doubt that she will star in many future movies. There are numerous well constructed scenes. There is a pageantry scene which is gorgeous. I liked the surprise ending. Due to these good qualities I give the movie 5 stars.
However, there are some problems with the plot. While I think the script writer wanted to show conflict between the intelligent, lesbian daughter and her traditional parents, this simply does not ‘come off’. When we learn that her parents are first generation Americans from India, we might expect them to hold traditional values from their culture or religion. There are ‘suggestions’ of this but the parents are not even certain whether they are Buddhist, or Hindu. They had apparently stopped attending religious services when their children were very young. Indeed, the mother and the father too freely give up their ideas of right and wrong, perhaps because they are not based upon anything other than their own opinions. Sadly, their family life has no spiritual foundation and is built upon sand. Without strong scenes of conflicting social values, the parents quickly bend to the standard mores of today’s American society. This is especially evident when their daughter, Savarna, brings home her lesbian lover, Charley, for dinner. After the shock wears off, the mother and father decide it is best not to upset their daughter but to offer unconditional love. However, their love is conditional because they want a grandchild that is a DNA, direct descendant. Their younger daughter’s sweet, adopted grandbaby, Chitra, is mostly ignored by these grandparents.
Ironically, it is the daughter, Savarna, who remains upset because she does not like any suggestions of marriage and a family. This stubbornness is questionable as she works in a laboratory tied to in-vitro fertilization and she has been with her partner for two years. It is also this daughter who does not practice unconditional love. She appears to be unhappy or disgusted most of the time. Having parents who are accepting of her lesbian arrangement, does not brighten her attitude. Why isn’t there an argumentative scene between Savarna and Charley about having a baby, adopting a baby, or waiting to become parents? The audience needs to understand their motives and desires. This aspect is hurriedly brushed aside.
Late in the movie, “Grandma” arrives from India. She offers no opinions but spends her time praying with a spiritual guide. The unexpected arrival of this elderly grandparent introduces a spiritual dimension which we learn is traced back 2500 years.
The surprise ending is delightful and ought to have made a significant difference in the characters’ lives. However, once again popular American values overshadow a mystical blessing. The awaited Thanksgiving toast is directed to Charley, rather than honoring the most wonderful of godly surprises. I can only imagine that to be blessed by Buddha, must seem as significant to believers, as being blessed by God, Christ, or a higher power; but this blessing is not joyfully expressed with gratitude and thanks, especially on "Thanksgiving". Overall, the movie is enjoyable and tastefully done.

Kevin CarrReviewed in the United States on October 14, 2022
4.0 out of 5 stars
A heartwarming story
Verified purchase
This movie deals with cultural issues and sexual orientation with a little spirituality thrown in for good measure. All and all, it was a lovely story, and I would recommend it to anyone who would like a movie night. Preferably with a loved one and some wine.
Kevin Carr, Author

Jonathon PoeReviewed in the United States on September 1, 2022
5.0 out of 5 stars
Such a beautiful movie!!!
Verified purchase
This is such an Amazingly crafted movie. Everybody within the movie was aesthetically beautiful the lead Nazanin the lead gave me Marilyn Monroe vibes. She is so graceful in this movie. Should be shared with someone who is struggling with a decision that is not really a decision on gay individuals. Moved my cold soul to tears. Please keep creating movies like this it felt like a Hallmark movie... but better. When was the last time you seen a woman serve you Marilyn vibes whilst tackling a social issue. Supremely superb. Well done Director Constans.
One person found this helpful

Dan GloverReviewed in the United States on October 20, 2020
5.0 out of 5 stars
Just a Really Great Movie!
Verified purchase
I met (not in person met but on Twitter met) the writer Gabriel Constans last year (or possibly 2 years ago: time does tend to slip on me) when he generously reviewed one of my books. When he contacted me about his new movie, I thought: oh no. Not a romantic comedy. Well. Let me share with you a little something about my experience watching The Last Conception. That's why I am here, after all. I mean, we are here. If you are reading this. Which I assume you are.

First of all, I have this weird connection to India. I did one of those DNA tests earlier this year -- you know the kind that purports to tell you your ancestry -- and discovered among other surprises that I have (had?) a Punjabi ancestor who lived in the 18th century. I found this extremely confusing because although I always wanted to travel to Europe and possibly China and even wrote stories about my imagined adventures, India never figured in any of my thoughts. Shouldn't I have felt more in tune with this? I guess not.

Be that as it may, as I began watching The Last Conception, I was somehow reminded of my own family history and how these connections cross both time and space. Of course, the family dynamics portrayed in this movie are nothing like those of my family. But enough of me. We (I) are (am) here to talk about this wonderful movie. So. Onward.

The story is marvelously written and now, well, I feel I have to go buy the book. Read it. Yes. The acting is top-notch, as is the directing. Just a well-made film. As I said, when I heard from Gabriel, I was not exactly thrilled with the prospect of watching this movie. I could not have been more mistaken. This is well worth your while if you have a little down time and are looking for something really delightful to watch. The Buddhist influence is something near and dear as well.

Thank yous all around: writer, actors, director, and other folks too numerous to mention here, for making such a really great movie! Do watch it if you get a chance.
4 people found this helpful

Angelo M.Reviewed in the United States on August 16, 2021
5.0 out of 5 stars
A warm and funny family comedy-drama, with unexpected twists: LGBTQ, India, Buddhism--and pregnancy!
Verified purchase
"I miss the closet!" Savarna, our beautiful gay heroine, blurts out, after her very unplanned coming out to her slightly quirky Indian immigrant family. Her loving but meddlesome parents (pushy Mom, peacemaker Dad) are suddenly leaning hard on their very private eldest daughter to find a Nice Man! And pop out a baby! And do it yesterday! No one else, it seems, can carry on the family's ancient bloodline. So let's get right on that, Savarna! . . .Well, Savarna has a girlfriend she loves, and a baby might be nice someday (they smell good, after all), but right NOW? On demand?! For her family's mysterious reasons and urgent timetable, not her own? Who wants this kind of pressure?! And then Grandma arrives from India, carrying a little box of big family secrets...

This is a sweet story with a lot of heart. It's well filmed and well acted. It treats every character with love, respect and a gentle touch, and takes the conflicts of the central gay character seriously. And it's refreshing to see gay characters who simply love being gay, are comfortable being who they are and loving who they love, and aren't conflicted about it--they just want to live their own lives, and not fit them into someone else's agenda. But it's also a story where even the most stubborn characters begin to see that their agendas might not be as incompatible as they thought.

I can recommend this bright, charming, independent comedy for anyone, straight or gay, single or married, or in the middle of a big complicated immigrant family. It's warm and funny and winning.
One person found this helpful

DockieReviewed in the United States on July 10, 2022
5.0 out of 5 stars
It's all about family--even quirky families
Verified purchase
This is such a quirky, delightful, humorous movie and my hubby and I both enjoyed it so much. Was recommended to me on Twitter and I'm glad I found it and watched it. Interesting glimpse into East Indian life and families. The older daughter is gay and the younger daughter & husband adopted a child so the film is about convincing the gay daughter to have a child of the their blood...or is it? You have to watch it to find out but it's well worth your time!
One person found this helpful

Amazon CustomerReviewed in the United States on August 21, 2022
5.0 out of 5 stars
Fun, lighthearted, romantic comedy with a twist.
Verified purchase
I like romantic comedies in general. But this had a different twist to it. It taught me alot about Indian culture in a fun, lighthearted way. The movie was quite captivating, I would definitely recommend it. Phenomenal cast & acting as well.
One person found this helpful

M A LewisReviewed in the United States on August 8, 2022
5.0 out of 5 stars
Delightful
Verified purchase
A delightful tale of modern love and family meets ancient beliefs and culture. The Last Conception is fresh and charming, with a plausible tale that quickly converts you from a viewer into a member of the family. And just when you think you've figured it out, the film pivots again. A fun rom-com with several new twists.
One person found this helpful
See all reviews
Back to top
Get to Know Us
Make Money with Us
Amazon Payment Products
Let Us Help You
EnglishChoose a language for shopping. United StatesChoose a country/region for shopping.
© 1996-2022, Amazon.com, Inc. or its affiliates