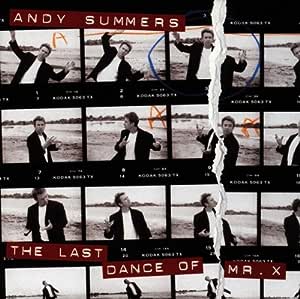 The Last Dance of Mr. X is a captivatingly atmospheric voyage round Summers's bleached jazz roots. Dominated unsurprisingly by Summers's intricate fretwork, these 11 instrumentals comprise chiefly originals and homages to jazz maestros.... Too edgy to qualify as ambient, the album retains a clipped and disciplined shape. -- What the Critics Say

4.1 out of 5 stars
4.1 out of 5
14 customer ratings
How does Amazon calculate star ratings?
Amazon calculates a product’s star ratings based on a machine learned model instead of a raw data average. The model takes into account factors including the age of a rating, whether the ratings are from verified purchasers, and factors that establish reviewer trustworthiness.
Top Reviews

Mario N. Messina
5.0 out of 5 stars cd case and cd were like brand new
Reviewed in the United States on April 6, 2018
Verified Purchase
Cd came fast and the case and the CD itself was in brand new condition . I had bought a copy of this cd a while back from another seller and it was terrible it skipped a lot on the cd and I don’t get that with this product thanks
Read more
Helpful
Comment Report abuse

Jorge Barbarosa
4.0 out of 5 stars I liked it
Reviewed in the United States on March 18, 2002
Verified Purchase
Andy is an accomplished musician, and this release really opened that facet of Summers to me. I like it, it's good, it's jazzy, it's blue, it's happy.... it's just a good release. All the recording guests shine. The percussion/drummers REALLY shine -- BRAVO!!!
Performers
Gregg Bissonette : Drums
Bernie Dresel : Drums
Tony Levin : Bass
Andy Summers : Guitar, Vocals
Jerry Jr. Watts : Bass

Raj Manoharan
5.0 out of 5 stars The RajMan (Fan) Review
Reviewed in the United States on March 9, 2014
After a scorching remake of the Charming Snakes track Big Thing (with Jerry Watts on bass and Bernie Dresel on drums), Summers' guitar leads Tony Levin's bass and Gregg Bissonette's drums through a delectable mix of jazz originals and standards.

Since this is a jazz guitar trio record, there are little or no overdubs, leaving Summers to rely more on atmosphere and texture and draw extensively from his classical training. Of course, Summers also manages to come up with some interesting and unique lead guitar lines in this format. It's also a marvel to hear how much Summers, Levin, and Bissonette can achieve sonically.

In terms of the songs themselves, Summers' compositions blend seamlessly with those of jazz greats such as Thelonious Monk, Charles Mingus, Wayne Shorter, Horace Silver, and Mongo Santamaria.

This is a pleasant, laid-back, and mellow detour from Summers' usual dark edginess and is similar in tone to his 1991 release World Gone Strange.
Read more
One person found this helpful
Helpful
Comment Report abuse

Julian Stevens
5.0 out of 5 stars His tour de force
Reviewed in the United States on November 20, 2011
A most interesting yet, on first acquaintance, seemingly self indulgent album based almost entirely on just electric guitar (there's some acoustic in the background on tracks 2 and 11), Tony Levin on (presumably his monster three string fretless) electric bass and, on drums, an exceedingly nifty fellow called Gregg Bissonette who, back in the late nineties, seemed to be getting about all over the place. This album is, however, much more than an indulgence.

Recorded in just over a week, mostly in LA, using HDCD encoding (which certainly does work), the tracks are a mix of AS originals (four, plus one co-written) and earlier compositions from the likes of Wayne Shorter, Mongo Santamaria and Thelonius Monk, arranged magnificently in a fully contemporary setting. Much virtuosity is in evidence here, for example the cover of Horace Silver's Lonely Woman, which bears comparison with the remarkable version on Pat Metheny's 1984 album Rejoicing (though Billy Higgins' amazingly ambient, bloomy wash of brushed cymbal sound remains unsurpassed).

The opening track, recorded for some reason in NYC, is said to be augmented by (Keiko Matsui's) Bernie Dresel on drums and (Wishful Thinking's) Jerry Watts on bass and, although it takes a good few hearings to fall into place with what follows, it's grown on me big time, including as it does a shameless rip-off of the central riff from the Cream's Sunshine Of Your Love.

Though bearing in places faint echoes of it, this certainly isn't a continuation of 1991's (brilliant) World Gone Strange, being somewhat more sombre (in places) and introspective, though not without its joyfully light and airy moments as well. Mind you, it isn't easy listening either, though this is simply because the arrangements and their execution are so very accomplished and immaculately executed that they simply can't be ignored as background swash. Fave tracks are Afro Blue (by Mongo Santamaria) and Footprints (by Wayne Shorter), the latter containing some superbly crisp, fiery and fluid drumming overlaid by furious Robin Trower-like guitar work (better, in fact) and underpinned by Levin's fluidly restless, roving and awesomely potent bass lines. And in amongst all this, AS' own compositions are verging on the wondrous as well.

To carp, I suppose one might wish for a bit more colour in the form of perhaps some Hammond B3 organ, but this is a failing of the most trivial insignificance. A near total masterpiece of an album really and all the more praiseworthy considering how long he's been around, including stints with the Animals in their later incarnation and, of course, with The Police.

The sheer range of styles and sounds of Mr Summers' guitar playing is superb as well, though not to the extent that the album overall sounds in any way disjointed or uneven. Quite the contrary, in fact ~ this is a wonderfully coherent and cohesive work from a true master of his instrument, quite the best of all his albums that I've yet heard. There's absolutely nothing wrong with his work as a member of the Police, but The Last Dance of Mr X is, by comparison, in a whole other league of excellence and, sad to say, many people will never even know of it. But then it is jazz I suppose and, to many people, jazz is a closed book. They don't know what they're missing and this is one of the very best albums in my collection. Definitely one of my desert island discs.
Read more
One person found this helpful
Helpful
Comment Report abuse

Flexible_Strategies
5.0 out of 5 stars Andy in top form
Reviewed in the United States on August 31, 2006
This is my all time favorite Andy solo disc. I saw him perform quite a few of these songs live in a small jazz supper club here in Los Angeles, where he would frequently perform in the late 90's. Andy is so charming in person, the kind of performer who comes out and chats with the audience after the set. I've had numerous chats with him about various topics over the years, and it's my feeling that his charm, wit and wicked sense of humor is displayed perfectly on this disc. To see Big Thing, one of my favorites, performed live is a must.
Read more
6 people found this helpful
Helpful
Comment Report abuse

High Speed
5.0 out of 5 stars Summers' desert island album
Reviewed in the United States on February 12, 2008
If I were stranded on a desert album, this is one of five albums I'd had to have with me to survive. More layers, more colors, more voices appear with each listen. For a good example of how refined this album is, compare "Big Thing" on this album to his original on Charming Snakes. Andy Summers had a tremendous group of musicians accompanying on this album, and he was at the peak of his immense powers here. If you want to hear Andy Summers in a more electronic form, closer to the Police sound, then start with an earlier album like The Golden Wire or World Gone Strange and work up to the jazzier sounds on Last Dance of Mr. X.
Read more
One person found this helpful
Helpful
Comment Report abuse
See all reviews from the United States

Oldromola
5.0 out of 5 stars A wonderful album
Reviewed in the United Kingdom on November 3, 2012
Verified Purchase
I bought this following a recommendation from Amazon UK reviewer Julian Stevens, and I'm highly delighted I did. Please see Julian's expert review for fuller details. If you are a jazz enthusiast like I am, you may wonder what interest you might find in a recording by a pop guitarist. The answer is plenty. The first 'heavy metal' type track (Big Thing) reminds me of my favourite heavy metal album - John McLauglin's `Trio of Doom'. There is no better. I like all the tracks, but my number 1 has to be his wonderful improvisation on the Mingus tune `Goodbye Pork Pie Hat' at the end. Deeply felt and lovely to listen to. A 5 star no brainer.
Read more
2 people found this helpful
Helpful
Sending feedback...
Thank you for your feedback.
Sorry, we failed to record your vote. Please try again
Report abuse