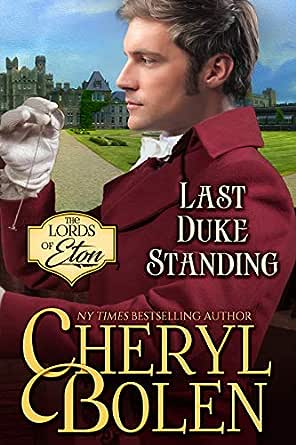 You've subscribed to The Lords of Eton! We will preorder your items within 24 hours of when they become available. When new books are released, we'll charge your default payment method for the lowest price available during the pre-order period.
Update your device or payment method, cancel individual pre-orders or your subscription at
Your Memberships & Subscriptions
There was an error. We were unable to process your subscription due to an error. Please refresh and try again. 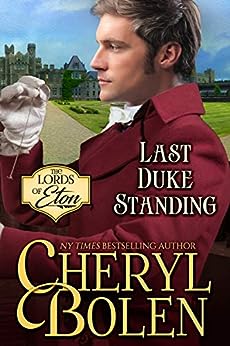 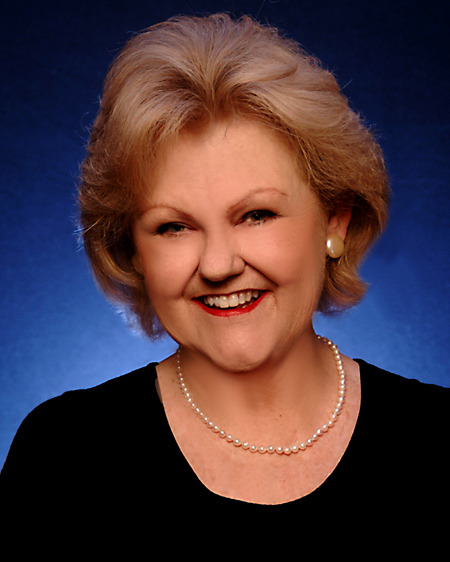 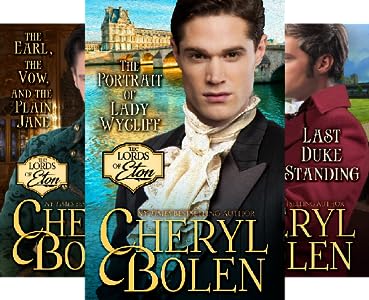 4.5 out of 5 stars
4.5 out of 5
35 customer ratings
How does Amazon calculate star ratings?
Amazon calculates a product’s star ratings based on a machine learned model instead of a raw data average. The model takes into account factors including the age of a rating, whether the ratings are from verified purchasers, and factors that establish reviewer trustworthiness.
Top Reviews

Kay Hudson
5.0 out of 5 stars The Eton trilogy wraps up
Reviewed in the United States on January 16, 2019
Verified Purchase
Alex Haversham, much to his own surprise, is the Last Duke Standing in the third tale in Cheryl Bolen’s Lords of Eton trilogy. Recently returned from service in the Peninsular War, he is stunned when his brother Freddie, the eighth Duke of Fordham, dies in his sleep, leaving Alex as the ninth Duke. As the third son, Alex never expected—nor wanted—to inherit the title.

Now he is faced with all the responsibilities of his new position, including breaking the sad news to Freddie’s fiancée, whom Alex has never met.

Lady Georgiana Fenton can hold her own in any situation, even the sudden death of the fiancé she was fond of, if not in love with. But she’s not sure what to think of this new Duke who looks so much like Freddie—but behaves so differently. And who seems to be the only person who would benefit from Freddie’s untimely, and perhaps suspicious, death.

Despite their prickly relationship—Georgiana is a Tory and Alex is a Whig—the two team up to discover the truth behind Freddie’s death, and the even more important matter of their future.

Cheryl Bolen spins a delightful tale of mystery, politics, and (of course) romance, in a most satisfying conclusion to the story of three men who bonded as boys in school and rushed to one another’s aid as adults.
Read more
One person found this helpful
Helpful
Comment Report abuse

Jo Anne
5.0 out of 5 stars Historical romance, Lords of Eton, enjoyable series
Reviewed in the United States on October 6, 2019
Verified Purchase
Alex Haversham is a soldier, recently returned from the Peninsular War. As a third son, he never expected nor wanted to hold the family title. But when his brother, Freddie, suddenly dies in his sleep, Alex becomes the ninth Duke of Fordham. His first ducal responsibility is to inform his brother’s fiancée, Lady Georgiana, of his death. Georgiana truly liked Freddie, even though theirs was not a love match. When her suspicions of foul play are confirmed by the family doctor, Alex and Georgiana must work together to find the murderer.

Alex is a Whig. Georgiana’s family have always been Tories. Georgiana deduces that of those present the day Freddie died, Alex has the most to gain from his brother’s death, but she finds it hard to believe he’s guilty. Despite suspicions and political differences, their mutual attraction grows.

This story has it all: mystery, intrigue, and romance, as well as an excellent representation of the social and political standards of the time. Cheryl Bolen is one of my favorite historical authors. This was a great final installment of the stories of three good friends who met and bonded at Eton, and who were always there for each other as adults. The Lords of Eton was a most enjoyable series.
Read more
Helpful
Comment Report abuse

Kindle Customer
3.0 out of 5 stars Only my opinion
Reviewed in the United States on February 16, 2019
Verified Purchase
Light entertainment. Good editing. Knows good contruction. Maybe it,s me but I am finding the romance story are same old same old . Hey have no magic any more. Don't take my opinion to heart.
Read more
Helpful
Comment Report abuse

C. Nueva-Espana
5.0 out of 5 stars Wonderfully well written
Reviewed in the United States on February 7, 2019
Verified Purchase
I easily related to the Duke and h i s future bride. You could feel, see and hear the voices of the subjects in Cheryl 's stories. Good investment of time and money.
Read more
Helpful
Comment Report abuse

MarybytheSea
5.0 out of 5 stars Lovely Regency Romance
Reviewed in the United Kingdom on January 17, 2019
Verified Purchase
This is the third book in the series and the three friends have now all found their loves but if we are lucky they could go on to work together to right other wrongs. They have very strong ties to each other and are closer than brothers. This book is a mixture of romance, murder mystery and politics and I highly recommend it.
Read more
One person found this helpful
Helpful
Sending feedback...
Thank you for your feedback.
Sorry, we failed to record your vote. Please try again
Report abuse