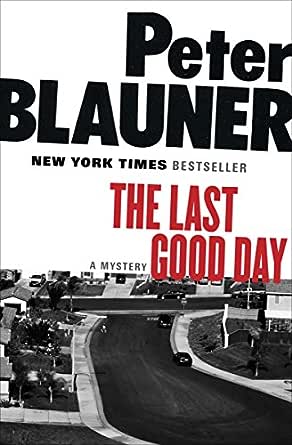 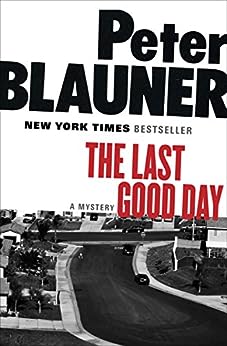 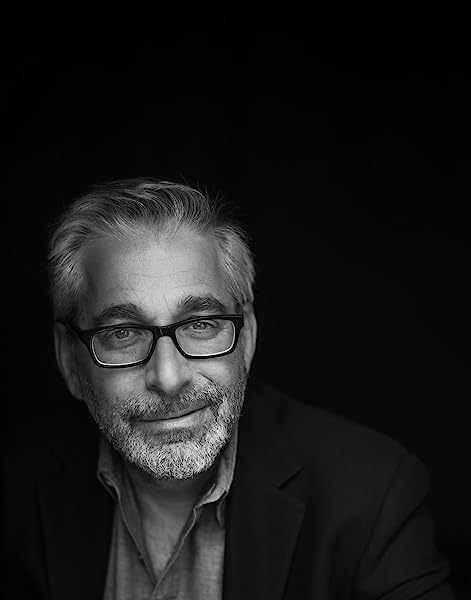 “The Last Good Day is light-years beyond a standard murder mystery; it is a mesmerizing work of great American fiction.” —Nelson DeMille
“Readers who can follow Blauner’s intricate plot will be rewarded, but only at the very end—no giveaways here.” —Publishers Weekly

Peter Blauner (b. 1959) has spent nearly his entire life in New York City. After graduating from Wesleyan University he took a staff job at New York Magazine, where he found the inspiration for his first book, the Edgar Award–winning Slow Motion Riot, in the men and women who work in the city’s probation department. Since then, he has written five more novels: Casino Moon, the New York Times bestseller The Intruder, Man of the Hour, The Last Good Day, and 2006’s Slipping Into Darkness.

The Schulmans, a big-city family recently transplanted to smaller, comfier Riverside, New York, find that life in the suburbs ain't all it's cracked up to be: a body appears in the river and turns out to be the remains of Lynn Schulman's close friend, the victim of a gruesome murder; Lynn's former beau seems to have blossomed into a not-so-charming stalker; and around every corner there is some hint of other ominous goings-on. In some ways, Blauner's latest will remind readers of an Ira Levin thriller: ordinary people menaced by an evil that is hard to pin down, harder still to combat. But Blauner, whose first novel, Slow Motion Riot (1992), won an Edgar, is no imitator. He has a lightly ironic point of view, using the trappings of contemporary society (SUVs, cell phones, "McMansions") to illustrate how our dependence on technological stuff is rendering us increasingly incapable of dealing with life's subtleties. His prose style is tight, his dialogue snap on, and his mix of social commentary and traditional thriller should appeal to a crossover audience. David Pitt
Copyright © American Library Association. All rights reserved --This text refers to an alternate kindle_edition edition.

Lynn Schulman brings her husband and children back to the peaceful New York suburb she escaped after high school to get away from the post 9/11 dangers of city life. But when the headless body of her oldest friend turns up in the river and the cop who investigates turns out to be an old boyfriend still seething at her betrayal of their adolescent romance, her safe haven turns out to be as sinister and threatening as the mean streets she left behind. Mike Fallon hasn't forgotten her--as his own life spirals down into personal failure and professional ruin, he focuses his attention on recapturing the girl who got away and the dreams that went with her. Blauner is a skillful writer who manages with a few quick brushstrokes to capture both the placidly calm exterior of a small suburban town and the dark secrets that seethe beneath it. Good plotting, nicely drawn characters, and a deft hand with the narrative drive this solid thriller to the last page.--Jane Adams --This text refers to an alternate kindle_edition edition.

After 9/11, Barry and Lynn Schulman move from New York City to be safe. They move to Riverside, a thirty-five-minute train ride up the Hudson. Once there, Barry secretly invests most of the family's savings in an "iffy" Alzheimer's drug; Lynn's best friend is murdered; and her old flame, a cop with anger management problems, is stalking her. Jonathan Marosz's friendly tones draw the listener in, making the chaotic chain of events even more horrific. Marosz's performance of children is unsentimental, while the adults' rationalizations sound painfully familiar. Blauner's plotting is fresh, his characters original, and his action sequences brilliantly cinematic. But the story suffers from too many self-conscious similes. The writing is strongest when it's simple, allowing Marosz to make the most of every action-packed moment. S.J.H. © AudioFile 2003, Portland, Maine-- Copyright © AudioFile, Portland, Maine --This text refers to an alternate kindle_edition edition.

You know you're in the 'burbs when a cop's epitaph for a murdered local drug dealer is, "Man, he was an asshole, but he had a beautiful lawn." In his fifth novel, Edgar-winner Blauner (The Intruder, etc.) imagines an idyllic suburb up the Hudson River from Manhattan, full of karate moms and commuter dads; in the shadow of September 11, he peels away the affluent veneer and exposes the roiling class tensions and frustrated ambitions beneath. The decapitated corpse of a local housewife is spotted floating in the water by commuters waiting for the inbound 7:46, including Barry Schulman, counsel for a start-up pharmaceutical company now teetering on the brink. Barry's wife, Lynn, a mother who's had to relegate her passion for photography to a hobby for the kids' sake, was the victim's best friend. To her horror, the investigating officer, Michael Fallon, has had his long-dormant passion for Lynn awakened by the case. Fallon, a struggling blue-collar nth-generation Irish-American cop, has dark secrets to hide concerning his prior involvements with both Lynn and the victim, which in turn necessitates his withholding information from his "former best friend" (now the town's first black police chief) Harold Baltimore so as to keep his prying rival, "a pugnacious Puerto Rican" named Paco Ortiz, from making Fallon the prime suspect. Harold, Lynn, Michael and the victim all went to school together, and the uneasy tensions arising from their uneven rises to various stations in life fuels a dangerously explosive tinderbox of resentment. Readers who can follow Blauner's intricate plot will be well rewarded, but only at the very end-no giveaways here.
Copyright 2003 Reed Business Information, Inc. --This text refers to an alternate kindle_edition edition.
Read more

3.7 out of 5 stars
3.7 out of 5
56 global ratings
How are ratings calculated?
To calculate the overall star rating and percentage breakdown by star, we don’t use a simple average. Instead, our system considers things like how recent a review is and if the reviewer bought the item on Amazon. It also analyzes reviews to verify trustworthiness.
Top reviews

Just a reader ...
1.0 out of 5 stars It took only 6 chapters to kill my interest ...
Reviewed in the United States on September 7, 2018
Verified Purchase
I recently ran across this book in my library. I bought it years ago for $1.99 shortly after buying my first kindle. I buy lots of books, and sometimes they sit in the queue awhile before I get to them. I suspect this one was a special offer with a sales plug that struck my fancy.

It took only 6 chapters of Blauner's tedious, superfluous prose and conspicuous product-placement shout-outs to drive me to the point of simply no longer caring about the story.

To me, it felt like a potentially interesting story in the hands of the wrong writer.

Cheryl B. Dale
3.0 out of 5 stars Easy Read
Reviewed in the United States on June 18, 2012
Verified Purchase
An interesting story but the characters seem a little off.

When a headless corpse is discovered floating in the waters, commuters soon discover she's a local who grew up with nearly everyone involved in the police investigation.

Like a cop who lives too much in his past and a best friend who doesn't realize harassment charges against the cop will bring out her own dirty laundry. Even the police chief knows the dead woman. Then there's his problem of suspecting the cop (who was passed over for the chief's job), who's also a friend, but trying to be impartial. The chief is the most sympathetic character. The other characters and their angst seem thrown in to fill up space and maybe muddy the waters.

The ending wrapped up loose ends but it left me dissatisfied. I won't say why since it'd be a spoiler. I will say that anyone who likes their mysteries dark will probably like this one.

Adrian
4.0 out of 5 stars Flawed and human characters you can relate to...
Reviewed in the United States on September 3, 2012
Verified Purchase
Bought on the promise of a simple thriller, I found the characters very interesting in their mixed motivations, the gap between self-perception and actual actions (particularly Lynn), as well as the search for something resembling happiness. Found myself caught in the plot, not really as a whodunnit (suspects are quite few, leaving little choices), but as a telling tale of dashed hopes and overreaching hubris. Found myself aching a little, when every mistake and contradiction is fully logical with the character's outlook on life. Recommended, will definitely read more books by this author.
Read more
2 people found this helpful
Helpful
Comment Report abuse

Kindle Customer
4.0 out of 5 stars The Last Good Day.....a worthy read...held my interest
Reviewed in the United States on June 4, 2012
Verified Purchase
A mentally deranged immoral jerk called a police detective named Michael, another mentally disturbed sports memorabilia dealer, named Jeffrey, his unhappy wife, Sandi, and Lynn who claims to be a photographer and gets caught in the middle of this mayhem, plus Baltimore, the police chief, make up the core of this book. Most of the characters are living way above their means with big homes and expensive lifestyles, but, only steps away from bankruptcy. After the murder, everything falls apart for these people who are living on the edge. A worthy read...held my interest.
Read more
2 people found this helpful
Helpful
Comment Report abuse

Amazon Fan
2.0 out of 5 stars Not even close
Reviewed in the United States on August 26, 2019
Verified Purchase
The author didn't make the characters make enough sense to make the reader want to find out what happened and why. Sorry, I wish I hadn't read it.
Read more
Helpful
Comment Report abuse

Jane Arnold
3.0 out of 5 stars Enough to hold your interest
Reviewed in the United States on February 27, 2018
Verified Purchase
I’ve been a mystery reader for 50 years and still love them. This one is ok but not among the greats or even the favorites. Not many surprises or creative plot turns. Pretty easy to see the end. A good bargain if on sale, probably best read on a longish flight.
Read more
Helpful
Comment Report abuse