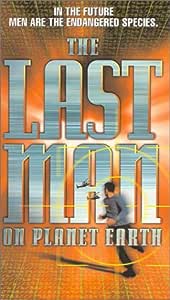 As stated on the back of the VHS Video itself: Fiery action and heart pounding suspense meet in this stylish sci-fi thriller set in a world where only women exist and the reproduction of males is outlawed. In the not-so-distant future, biological warfare has eradicated the male sex. Determined that man's violent nature will never again threaten the world, the surviving women clone only female offspring. But when a brilliant and beautiful young scientist (Julie Bowen) develops a genetically engineered male named Adam (Paul Francis), women transform into deadly predators seeking to eliminate him. As Adam and his creator run for their lives, the suspense escalates, building to a shocking, edge-of-your-seat climax.

3.0 out of 5 stars
3 out of 5
8 customer ratings
How does Amazon calculate star ratings?
Amazon calculates a product’s star ratings based on a machine learned model instead of a raw data average. The model takes into account factors including the age of a rating, whether the ratings are from verified purchasers, and factors that establish reviewer trustworthiness.
Top Reviews

Thomas M. Sipos
VINE VOICE
2.0 out of 5 stars vapid made-for-cable TV movie, with poor acting
Reviewed in the United States on December 22, 2006
Verified Purchase
This is obviously a made-for-TV film. You can tell by the fade-outs every 15 minutes or so, so you can go to a commercial break. I'm guessing this was made for The Sci-Fi Channel, partally because of the content, but also because it's a Paramount film, and Paramount was a 50% owner of The Sci-Fi Channel with Universal when this film was made.

The new Outer Limits had better production values (and that's a pretty low bar). Story's supposed to be set in D.C., but it's obviously Los Angeles. As is typical in almost all films, there are curiously few cars on the streets during a car chase.

I won't rehash the plot; other reviewers have done it well enough. This film is slight on plot anyway, and it's remarkably easy to guess what will happen next. I was about 15 minutes ahead of every plot development.

This film has the requisite cute observations that we've seen ad infinitum in the "all female world" subgenre (which, in modern times, goes back at least to the 1930s SHE). There are the "closet heteros." Naturally, the most vocally anti-male woman turns out to have secret sexual desires for men. There are also some bad men to balance things out.

The best scene in this film was the red light district, werein yuppie women troll for hookers dressed as men. Kinda cute, that female hooker dressed as singer Michael Jackson. I also liked the mindless teen slang, using such words a "frozen" and "burnt" to signify cool, and "vacant" to mean stupid.

The acting in this film is awful, just awful, with few exceptions. Julie Bowen is okay, but despite her talent, she can't do much with the material. Her best film is JOE SOMEBODY, in which Bowen demonstrates a strong flair for romantic comedy. She is a gifted comedien. However, she has little opportunity to demonstrate that flair here, playing a geneticist who creates a man.

Bertha Carrillo
5.0 out of 5 stars good suspensful and provocative film
Reviewed in the United States on January 21, 2009
Verified Purchase
This is a movie with a very different concept "What if the men were killed? Will the world run by women would better? A young scientist does not think so, so she does the unthinkable to create a perfect man without having to be violent. While it may feel unrealistic, it shows anyone (male or female) to be hateful, power-hungry and self deluded.
Some critics have attacked the acting but I feel Julie Bowen who plays the scientist and Tamlyn Tomita who plays a cop trying to protect and uphold the laws to be convincing, if you want a sci-fi that deals in alternates realities Check it out.
Read more
2 people found this helpful
Helpful
Comment Report abuse

a customer
5.0 out of 5 stars Eye Opening
Reviewed in the United States on January 14, 2013
I saw this on the Sci Fi channel. Wish I'd taped it. It's an eye-opening and horrifying example of where Sexual politics are heading.

It's setting is a post World War 3 future, in which men are considered pure evil and nearly extinct. Women have conquered the world.

Back stories throughout the film tell the events between now and then:

Between now and world war 3, women scientists perfected Binary-Cloning. Genetic Material from any two people could be taken and artificially combined. Allowing women to genetically reproduce without sex and sperm, rendering men unnecessary for women to have children.

During World War 3, female military created and unleashed what they called "The Y Bomb". A series of bombs planted throughout the world, to spread an engineered virus across the globe. The virus was only fatal to Males, especially children and infants. About 98% of the males were exterminated.

After that, in the chaos, an all female government was elected. Who blamed the Y-Bomb on men, said men destroyed themselves. Then pushed the usual Misandric lies - Women are peaceful & Men are violent. That Men are genetically/inherently evil. That all the evil women do, and all of women's pain is because of Men. They used the fear, grief, and hate to achieve the political force necessary to drive Hetero-Sexuality into the Closet and enforce Lesbianism as standard way of living.

The majority of the male survivors were rounded up, the few who escaped were driven into hiding.

With that the Misandric Future was achieved - no more males, complete gendercide.
Read more
3 people found this helpful
Helpful
Comment Report abuse
See all reviews from the United States