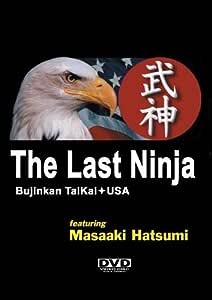 Masaaki Hatsumi - The Last Ninja In August of 2003, 72 year-old Masaaki Hatsumi, the GrandMaster of Togakure Ryu Ninjutsu, left his home in Japan and came to the United States to demonstrate the true art of the ancient Japanese Ninja. Hatsumi's system is called "Bujinkan" and contains elements of classic combat martial arts, as well as, the mysterious art of Ninjutsu. This DVD contains the incredible techniques and fighting style of the Ninja, including esoteric weaponry and hand to hand fighting. Hatsumi's teaching style is very conversational and gives insight into the warrior life philosophy of, perhaps, the most mysterious guerilla fighters who ever lived. Now at an advanced aged, but still remarkable strong and agile due to decades of his Ninja training, Hatsumi has said that he will never teach again outside of Japan. His retirement from international instruction is the end of an era. Masaaki Hatsumi is truly "The Last Ninja." Keywords: ninja;ninjutsu;ninjitsu;bujinkan;taikai;Masaaki Hatsumi;Hatsumi;Jack Hoban;Hoban;martial arts;karate;fitness;sports;health

Amazon Customer
5.0 out of 5 stars Great dvd
Reviewed in the United States on September 17, 2020
Verified Purchase
One dvd Tha realy is well documentos for the great Master hasumi is the Best of the best
Read more
Helpful
Comment Report abuse

Ian
5.0 out of 5 stars Absolutely Wonderful
Reviewed in the United States on May 7, 2006
Verified Purchase
Soke Dr. Masaaki Hatsumi is absolutely wonderful. The 3 disc DVD jumps right in and starts combat. I say combat instead of teaching because in one part of the video Dr. Hatsumi states, "This is a place of war, not a school." Being that I love Ninjutsu, I really gained a lot from this Tai Kai. Soke Hatsumi's way of saying be creative with techniques and "be free" really helps. I always feel if I change the technique I will be doing something wrong but Soke teaches that is exactly what to do. Warring and Wisdom - I would absolutely recommend this DVD.
Read more
6 people found this helpful
Helpful
Comment Report abuse

Jomahl Gildersleve
5.0 out of 5 stars feeling
Reviewed in the United States on March 7, 2006
Verified Purchase
This dvd was very helpful to my training. For those who are familiar with Soke Hatsumi's work,they can now see it in action, and try to understand the feeling he conveys with his artform. It is a must have for students of ninjutsu.
Read more
4 people found this helpful
Helpful
Comment Report abuse

SATOH
2.0 out of 5 stars Nothing but a DVD recording of Documentary & Training Seminar..
Reviewed in the United States on March 2, 2006
Verified Purchase
This is nothing but a 3 DVD disks recording of a Documentary and training seminary on Ninjutsu. Each disk last about 1 half hour. Those giving 5 stars are probably participants themselves helping in promoting this DVD. Buy ONLY if you want to see GrandMaster Masaaki Hatsumi.

I fast forward in between viewing 'cos it can be quite boring. So don't waste your money.I bought this DVD is b'cos of the many reviews that I read. So,don't trust reviews, including mine. It's your choice and your taste. Credits must given to the clear picture. Warning, there's no Chapters selection in all 3 DVDs.
Read more
9 people found this helpful
Helpful
Comment Report abuse

Amazon Customer
3.0 out of 5 stars Three Stars
Reviewed in the United States on January 19, 2016
Verified Purchase
It was good but needed to be more instructional.
Read more
One person found this helpful
Helpful
Comment Report abuse

M. K. Spann
5.0 out of 5 stars TaiKai
Reviewed in the United States on July 9, 2007
I never write reviews. In coming across this link I thought my insight might be valuable. TaiKai 2003, I was there, and I have this DVD. This is not an A-B-C instructional. This is footage from a three day seminar.

What you learn in the Bujinkan depends upon your teacher, how you learn and retain it depends entirely upon you. I was a mid level green belt at this Tai Kai initially overwhelmed by the thought of training with a room full of Black belts and others of greater experience. My class experience had been shinken gata from the beginning, my instructor taught me real world fighting even before the official allowance post 911 from Hatsumi. So I found that even though I may not have had all of the experience I might have wished for at the Tai Kai, that in training with individuals of various ranges of skill, I was very easily able to survive and actually thrive.

I did see black belts who seemed to lack the level of experience that I had. I also saw green belts who were incredibly accomplished and almost eerily smooth and proficient. It all has to do with what your teacher brings to the table, and then what you are able to absorb that is of value.

The format of the Tai Kai was demonstration and perhaps talk by Hatsumi, then a flurry of activity as onlookers attempted to replicate it. Hatsumi would watch and comment and caution, and then swiftly move into the next technique. The DVD cuts out all of the floor activity but does show how selected teachers and black belts interpret Hatsumis technique as they display it on stage.

When I looked around I could see that many to most people were not replicating what Hatsumi was doing on stage, even some of the demonstrating Black instructors missed the mark. But the value of the event is in getting the "feeling" of where you need to be and what you need to do in such a situation. Not stomp, kick, thrust, punch, repeat - THAT in my humble opinion will get you killed.

The training in the bujinkan can be old school full on, or some degree of it. Agreed, unless there in intent behind attacks and defense the sense of danger and urgency is not there, and unless power is there then you won't know what to do when really struck. All of that is within the teaching of the Bujinkan, it depends on your instructors method. I'd caution that while hoping for a teacher to show you the way of power, pray that you haven't walked into the dojo of a sadist.

You must also realzie that TIME and AGE will take SPEED and POWER from us all. Why spend a life learning a system that specializes or keys on power technique when you won't have the power needed at the time in life when you need it most? Predators always prefer the aged and weak, perceived or real. I specifically chose the Bujinkan to advance in once I discovered the age and ability of the elder Hatsumi and his instructor Takamatsu.

The two main concepts 'I found' that Hatsumi teaches here and shows repeatedly in every technique are "gain a sense of the combat so that you move naturally, even unhurredly into the position best for you and least beneficially to your enemy while allowing your enemy to believe that he or she is in best position and has you dominated, struck or hurt - when you are not." AND Remove balance from your opponent and NEVER give it back. He does this over and over.

Its for you to debate, discuss, or discover, but without balance you cannot have power. So if you rain in power and our angles and energy and methods remove your foundation... where are you then?

I have found that once balance is removed from an opponent, you can bring a 300 pound martial artist down with all the power inherent in an 11 year old girl. Bujinkan training keeps you alive while you manuever to do this, and shows you how to direct that fall to make it breath taking, or the final crash and burn.
Read more
5 people found this helpful
Helpful
Comment Report abuse

J. Sager
5.0 out of 5 stars The Best Martial Arts DVD I've Ever Seen
Reviewed in the United States on February 6, 2004
This terrific three-DVD set chronicles the last training event taught by ninja Grandmaster Hatsumi Masaaki outside Japan. For twenty-one years, Hatsumi-sensei has traveled around the world to teach the nine Japanese martial arts traditions he inherited from his teacher, Takamatsu Toshitsugu. In August, 2003, Hatsumi-sensei came to the U.S. for three days and amazed the participants with his knowledge and skill. Like it says in the product description, Hatsumi-sensei doesn't just show techniques; he gets to the essence and principles of the movement, offering unlimited freedom in dealing with any situation. His understanding of martial arts really comes through on this DVD, providing endless hours of viewing.
One attacker not enough? How about watching Hatsumi-sensei toss around multiple attackers half his age as if they weren't even there? Still not enough for you? Okay, lets add a variety of weapons such as shuriken (throwing stars), daisho (long and short swords), kyoketsu shoge (sickle and chain), and yari (spear), and watch as he effortlessly controls his opponents.
Most importantly, Hatsumi-sensei doesn't teach in a stiff and stern manner. His approachable and charismatic demeanor really comes through, and makes it not only fun to watch but much easier to understand what it is that he's teaching. I highly recommend this DVD set. Anyone interested in martial arts can benefit from the information, and those seeking the true essence of the warrior way will not find a better source!
Read more
13 people found this helpful
Helpful
Comment Report abuse
See all reviews