You've subscribed to Tess Monaghan Novel! We will preorder your items within 24 hours of when they become available. When new books are released, we'll charge your default payment method for the lowest price available during the pre-order period.
Update your device or payment method, cancel individual pre-orders or your subscription at
Your Memberships & Subscriptions
There was an error. We were unable to process your subscription due to an error. Please refresh and try again. 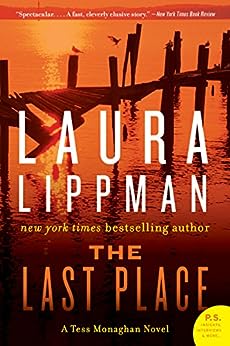 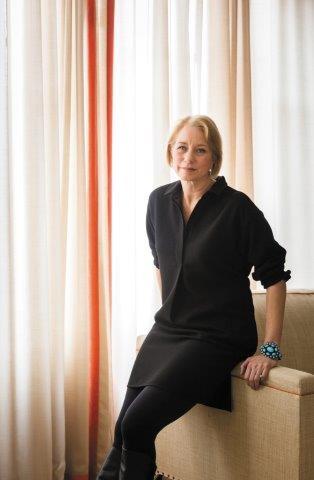 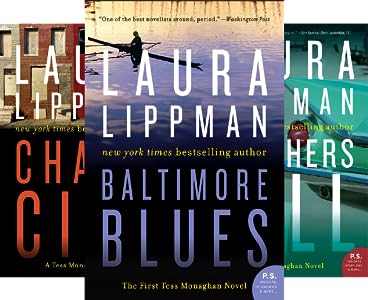 Lippman, reporter for the Baltimore Sun, excels at vivid portraits of her town's offbeat neighborhoods, hangouts and inhabitants. Seen through the eyes of her protagonist--a smart, funny P.I. named Tess Monaghan--Baltimore is never dull

In hot legal water—and court-ordered therapy—private investigator Tess Monaghan accepts an assignment with a local nonprofit organization to review police documents for inconsistencies and investigative blunders surrounding five unsolved Baltimore homicides. The cases seem unconnected except for the suspicion that each brutal death was the result of domestic violence.

But curiosity is soon pulling Tess off the paper trail and into dangerously unfamiliar territory, as she joins forces with a police officer obsessed with bringing a murderer down. Scant leads and intuitions are pointing the disgraced p.i. toward the most remote corners of Maryland, where a psychopath can hide as easily in the fabric of a tiny fishing community as in the alleys and shadows of Charm City. And a single, shocking common thread seems to be tying all the loose ends together into one bloody knot: Tess Monaghan herself.

Since Laura Lippman's debut in 1997, she has been recognized as a distinctive voice in mystery fiction and named one of the "essential" crime writers of the last 100 years. Her books have won most of the major awards in her field and been translated into more than twenty languages. She lives in Baltimore and New Orleans with her family.

Baltimore PI Tess Monaghan knows what to do with a jerk who prowls the Internet looking for love in all the wrong places: pretend to be smitten, slip one of his own date-rape drugs into his drink, cover him with depilatory cream, and leave him in a public place so he'll be too ashamed to do it again. It's hard to follow an opening chapter like that, but Lippman manages it nicely, putting her smart-mouth series sleuth in court-ordered anger-management counseling. The sessions with her shrink spur a most uncharacteristic—-for Tess--reflection on five cold-case homicides she's investigating for a foundation lobbying for increased funding for domestic abuse programs. They don't seem to be connected, but with the help of the retired Toll Facilities cop who discovered the head of one of the victims in the middle of his bridge, Tess discovers a serial killer no one even knew existed--until he made Tess his next target. This is the seventh outing in a lively, original series that keeps getting better and better. --Jane Adams --This text refers to an alternate kindle_edition edition.

Favors for friends don't always turn out as expected, Tess Monagham learns in this harrowing encounter with obsession involving her own past. At the urging of best friend Whitney Talbot, Tess agrees to research how police inexperienced with murder cases handle domestic-violence-related investigations. Delving into the specifics of the five deaths she's been assigned, Tess begins to sense that a simple review of the facts won't suffice and that these aren't isolated incidents. Toll-facility cop Carl Dewitt, who found one victim's head on the roadway of a bridge and has become obsessed with that case, convinces her that his detailed knowledge and tenacity can help. The pair cover a lot of ground, from northern Maryland to Virginia, from Baltimore to the Eastern Shore to a remote island where simple beauty can't sustain young people and the aging population keeps its secrets. In the process, Tess confronts some old demons, including a figure who has watched for years as she rows alone in Baltimore Harbor. He knows all about her and is biding his time. Lippman narrows her circle, drawing predator and victim closer. She contrasts the methods of the privileged with the ways ordinary folk must cope and how disastrous the results can be when the monstrous invades their lives.
Copyright 2002 Reed Business Information, Inc. --This text refers to an alternate kindle_edition edition.

In the seventh entry in Lippman's award-winning mystery series (and the third in hardcover after In a Strange City), someone is stalking feisty Baltimore P.I. Tess Monaghan. Tess is working for the foundation of moneyed college chum Whitney (who just got Tess involved in an escapade that has her in court-ordered therapy), investigating five seemingly unrelated open murder cases throughout Maryland to see whether there is a domestic homicide angle. Off the job, despite being happy with her younger boyfriend, Crow, Tess is having nightmares about seeing a former lover killed in front of her two years earlier. A Toll Authority cop who is obsessed with one of the murders (after finding the victim's decapitated head) becomes Tess's sidekick, and they follow a trail that eventually ties up all threads of the plot and leaves Tess with new nightmares. Lippman deftly juggles a sense of foreboding with quotidian details as she spins an engrossing tale, and she captures the essence of other Maryland venues as acutely as she does that of Baltimore. Tess is a standout among female protagonists in mysteries, and this is absolutely first-rate.
Michele Leber, Fairfax Cty. P.L., VA
Copyright 2002 Reed Business Information, Inc. --This text refers to an alternate kindle_edition edition.

If Nancy Drew went on performance-enhancing drugs, she'd resemble Tess Monaghan, Lippman's Baltimore-based private eye. Tess has much more in common with the old-time girl sleuth than with contemporary women private eyes: she has neither the latter's overcompensating toughness nor their dourness. Tess does have a chum, and they delight in pranks like the one that starts off her latest caper, dumping two date-rape tablets into the drink of a would-be assailant of underage girls. Tess' chum even helps Tess' business by asking her to investigate a series of domestic-violence cases for her charitable foundation. The police have cleared the cases, but Tess' friend feels they bear further examination. From this slim plot device stems a road-trip mystery, in which Tess travels across Maryland and discovers the cover-up of a grisly decapitation. A somewhat shaky plot, rescued by Edgar-winning Lippman's wit and intelligence. Connie Fletcher
Copyright © American Library Association. All rights reserved --This text refers to an alternate kindle_edition edition.
Read more

4.5 out of 5 stars
4.5 out of 5
87 global ratings
How are ratings calculated?
To calculate the overall star rating and percentage breakdown by star, we don’t use a simple average. Instead, our system considers things like how recent a review is and if the reviewer bought the item on Amazon. It also analyzes reviews to verify trustworthiness.
Top reviews

Donal Fagan
4.0 out of 5 stars Out of town
Reviewed in the United States on July 5, 2010
Verified Purchase
Lippman might have called this Out-of-Baltimore Blues, as much of the action is in small Maryland towns - or maybe Charmless Cities. As in the last book, Lippman barely mentions the extended family that figured so prominently in the first books. Kitty appears and Jackie Weir is mentioned in passing. Crow, Whitney and Tyner are present, but are not very fleshed out, and don't figure too much after the initial adventure. The only real supporting character is Carl Dewitt, a retired cop in some ways as backwards as all those little towns, but who proves invaluable in the investigation.

Although I enjoyed the usual Lippman fascination with foodstuffs, in many ways this plot-based thriller could have been set anywhere - on the water. Not that it wasn't exciting - it just seems that all the warm, fuzzy aspects of Tess Monaghan's Baltimore life have taken a back seat to the traditional elements of mystery writing. Perhaps this was an intentional strategy to attract a national audience, or perhaps this was written around the time when she moved away from Baltimore.

Given the unexpected change to Tesser's hairstyle, I expect more changes in the future.

J Stanley
5.0 out of 5 stars Tess Monaghan #7
Reviewed in the United States on April 25, 2013
Verified Purchase
This was a very good one! While I always love the character of Tess and the setting of Baltimore, I wasn't as excited about #5 and 6 as far as plot, this one has a more interesting plot! The tracking of the serial killer with the help of the toll booth worker/former policeman is well done. The interaction between Tess and Carl added a new dimension to her character. I hope that future ones do bring Whitney and Crow back in more because they still seem kind of unnecessary lately, but this was one of the best Tess ones in awhile!
Read more
4 people found this helpful
Helpful
Report abuse

Annette Rodig
5.0 out of 5 stars Best book by Lippman yet
Reviewed in the United States on November 8, 2010
Verified Purchase
"The Last Place" trumps over all of Lippman's previous works. The storyline is phenomenal and riveting. I love how this book's storyline is tied back to a previous book in Lippman's series. Again, Tess evolves and grows with each passing book and I'm completely fascinated with her character development.

In this particular work, Tess fights an unknown serial killer. Lippman crafts a phenomenal storyline, filled with twists and turns. Each chapter left me hanging on for more. It was so hard for me to put this book down and when it was over I was completely sad. I wanted the book to be longer, to keep going! This book sweeps you up in the terror and horror of one serial killer's path of destruction and his battle against one of the strongest and smartest woman heroine of all time. Lippman keeps the reader enraptured and on the edge of their seat throughout the whole novel. This is definitely the best novel Lippmann has ever written in the Tess Monaghan series.

Christina Wuillermin
5.0 out of 5 stars My favorite mystery writer
Reviewed in the United States on September 13, 2013
Verified Purchase
Everything Laura Lippman writes resonates -the way she describes family interactions.The way she describes city milieus.
And the way you notice her love of place. Donna Leon a long time ago!
Read more
Helpful
Report abuse

Kindle Customer
5.0 out of 5 stars I love Laura Lippman !
Reviewed in the United States on December 11, 2012
Verified Purchase
I have read all of Laura Lippman's stand alone books but hadn't read the Monaghan series so I started with the first one and I'm now on the last one. I'll be sad when I finish the last one. I'm gonna miss Tess.
Read more
Helpful
Report abuse
See all reviews

Sheila Mitchell
3.0 out of 5 stars Three Stars
Reviewed in the United Kingdom on July 2, 2015
Verified Purchase
Enjoyable read but not the best in the series
Read more
Report abuse

kaznik88
3.0 out of 5 stars Three Stars
Reviewed in Australia on September 29, 2015
Verified Purchase
I enjoy this series very much
Read more
Report abuse
See all reviews