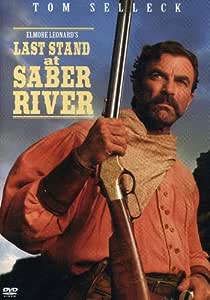 As the war between the states rages, a bitter Confederate soldier leaves the battle only to find another more personal war awaiting him at home. Tom Selleck and Suzy Amis star as a husband and wife who must fight for their land, their lives and their love in the western adventure Last Stand At Saber River.Paul Cable (Selleck) takes his wife Martha (Amis) and their two children back to the Arizona Territory but discovers that Union sympathizers have taken their land. Although Martha disapproves of the violence to which her traumatized husband hernow resorts, she has no choice but to fight alongside of him to save her family.Based on the novel by Elmore Leonard.

4.6 out of 5 stars
4.6 out of 5
663 global ratings
How are ratings calculated?
To calculate the overall star rating and percentage breakdown by star, we don’t use a simple average. Instead, our system considers things like how recent a review is and if the reviewer bought the item on Amazon. It also analyzes reviews to verify trustworthiness.
Top reviews

Sparky Waters
5.0 out of 5 stars You pay for everything now on Prime, becoming a big ripoff!!
Reviewed in the United States on October 3, 2020
Verified Purchase
We enjoyed the movie BUT we are sick and tired of having to pay for old movies, especially ones from 60 years ago! What, is Jeff Bezos so poor he needs to charge extra for everything? The more money he makes, the more expensive Prime becomes! If I watch a free series I notice that more and more scenes are being deleted. You are missing the plot of the show. We are in the process of purchasing favorite vintage tv series and will eventually cancel Prime. Also, the majority of their products are cheap China merchandise, and if you can find a familiar brand name product, you can do just as well at Target. I am no longer giving too much money to Jeff B., his greed is endless. Money is his idol and it is sad. Start purchasing from Target, they do same day delivery and they have a large array of online products, and their prices and special deals are FAB!!
Read more
3 people found this helpful
Helpful
Comment Report abuse

Dadimus Max
4.0 out of 5 stars Good old fashioned, recently produced western
Reviewed in the United States on December 26, 2014
Verified Purchase
** SPOILERS **
Yep, it's what you would expect from a Louis L'amour adaptation by Tom Selleck. Not bad, the production was well done. I was actually pleasantly surprised that the "Evil" cattle baron who we all assumed was trying to steal everyone's land from them, was not really all that bad . . . and even turns out to be one of the good guys in the end. That was a twist I wasn't expecting. But the reason for not going 5 stars on this was the whole seduction scene. I mean really, are we to believe that he is so oblivious that he wouldn't realize what the "bad" girl was trying to do . . . drive a wedge between the hero and his hard core frontier wife who just blew 2 bad guys away in order to protect her man?!? I tell you what, after seeing what the wife can do with that double barreled 12 gauge, I'm not sure any man in his right mind would dream about cheating on her (and he doesn't). All in all, it's a good movie, and one you can sit and watch with the kids and not have to worry about sex, drugs, foul language and tooo much in your face bloodshed.
Read more
9 people found this helpful
Helpful
Comment Report abuse

a voice of reason
4.0 out of 5 stars The first of Tom Selleck's excellent TNT Westerns
Reviewed in the United States on November 3, 2006
Verified Purchase
"Last Stand at Saber River" was the first of three excellent Westerns that Tom Selleck made for TNT between 1997 and 2003 (and I'm still hoping there'll be at least a fourth one some day). Selleck has starred in five made-for-TV Westerns total, three of which are based on Louis L'Amour stories. This one, however, is based on a book by Elmore Leonard, and the difference is obvious in both the lack of idealism and in the extreme violence.

Selleck is Paul Cable, a Confederate cavalryman who has come home from the Civil War (only slightly) early. He knows the war is lost for the South, he is worn out, and he only wants to take his family back to their homestead in Arizona to live a normal life. His wife, who was told that he was dead, is less than thrilled to have him back home because she is resentful that he left to fight in the war in the first place. Suzy Amis does an excellent job as Martha Cable. She is not the stereotypical beauty who runs around in a bustle under fancy dresses. She is a tough frontierswoman who has experienced many hardships and gets her husband out of some tight spots as the movie progresses.

While the majority of the movie is good at depicting the divisions between North and South that caused the Civil War and which the Civil War then exacerbated, the subplot of the inner struggles that Paul and Martha Cable face is far more interesting. It's a great movie until the end, when we get the additional time-worn subplot of a Confederate soldier who just can't give up the Lost Cause. No, it's not Selleck's character who has this problem, but Selleck already had covered this territory in 1982's "The Shadow Riders" (though it wasn't his character who wanted to keep fighting in that movie either); John Wayne's "The Undefeated" is another well-known film with the Lost Cause plotline.

In spite of the needlessly melodramatic ending, this is a strong Western. Selleck and TNT kept getting better and better with "Crossfire Trail" and "Monte Walsh". Check out all three, and you'll join me in wishing for number four.
Read more
20 people found this helpful
Helpful
Comment Report abuse

H. Bala
TOP 100 REVIEWER
4.0 out of 5 stars "Something wrong with this valley. The war's over, but the killing don't stop."
Reviewed in the United States on November 29, 2008
Verified Purchase
Over the years, Tom Selleck has developed into somewhat of a western icon. And why not? Selleck is spot on in fleshing out those qualities most cherished by folks of the untamed old west. And, of course, it doesn't hurt that he looks the part, all tall and rugged and bemustached. He's at it again in LAST STAND AT SABER RIVER, the 1997 TNT oater. In this one, he plays Paul Cable, a weary ex-Confederate soldier who returns home to Texas, knowing full well that the war between the states has already been lost, even as it rages on.

The terrible war has left scars on Cable, but it's also deeply impacted his wife and children. In his absence, his family had learned how to get on. His suddenly showing up causes tension to surface and mount as everyone is forced to cope with the new family dynamics. In particular, Cable's relationship with his steely wife Martha is in the crumbles. His wife never did see why Cable had to go off to war in the first place. During his years away, their daughter fell ill and passed away, and this leaves a lingering bitterness within Martha. She is so deeply resentful of her husband.

Struggling to readjust, Paul Cable takes his family back to the Arizona territory, back to their old homestead. But it ends up becoming yet another battle for Cable as he learns that Union sympathizers have overran his ranch. With his wife and children directly imperiled, Paul Cable means to fight one last time, to keep his land and his family.

LAST STAND AT SABER RIVER, adapted from Elmore Leonard's gritty novel, is more a contemplative western drama than a typical shoot-em-up, although things do climax with two pretty darn good action sequences. Much of the tension is provided by Selleck and Suzy Amis, who is very good and intense as his estranged wife Martha. Tom Selleck has done this type of role so often now that he can do it in his sleep. Not to say that dude is sleepwalking here. Selleck brings a worn down gravity to his role. His character is stoic, although he's good enough that you glimpse the sub-text of alienation, of a man tired of warring and who merely wants a return to a normal life. Selleck exudes quiet strength and enough machismo that he gets away with sporting a pink-colored shirt for much of the film. Veteran western actors and brothers, Keith and David Carradine, step in for good performances, particularly Keith, whose character rises above the role of predictable designated villain. And, whoever that girl is who plays David Carradine's refined but bored daughter, well, she's muy caliente.

Tom Selleck hasn't disappointed in any of his western films, although it's been a few years since he's done one, what with his involvement with the Jesse Stone movies. I say it's time for the man to get back in the saddle, hoist them six-shooters, and, yes, maybe even sport that pink shirt again (would it help to call the shirt salmon-colored?). There's still plenty of Louis L'Amour and Zane Grey novels out there, just waiting for someone to bring them to cinematic life. And Tom Selleck, he continues to embody that ideal man of the frontier.
Read more
2 people found this helpful
Helpful
Comment Report abuse
See all reviews

Kindle Customer
3.0 out of 5 stars Not Bad
Reviewed in the United Kingdom on July 31, 2013
Verified Purchase
Not a bad film but not brilliant ....
some of the stunt work is crap ..! (just my opinion)
the editing could be better
Some very good actors in this film but for me it just didn't live up to expectations
I think a different director might have helped
The story line ... Needed more work !
disappointed
!
Read more
Report abuse

Michael E Payne
5.0 out of 5 stars Five Stars
Reviewed in the United Kingdom on July 9, 2017
Verified Purchase
Great film starring Tom Selleck who makes a fine cowboy! Wish he had done a few more of them.
Read more
Report abuse

Page 1 of 1 Start overPage 1 of 1
This shopping feature will continue to load items when the Enter key is pressed. In order to navigate out of this carousel please use your heading shortcut key to navigate to the next or previous heading.
Back
Next
Pages with related products. See and discover other items: the last stand