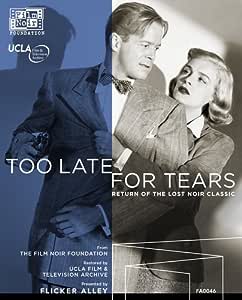 Finally! One of the great missing films of the classic noir era - resurrected! Rescued and preserved after a five-year crusade by the Film Noir Foundation, this 1949 classic is at long last available in a clean digital version, transferred from a 35mm print painstakingly restored by UCLA Film & Television Archive.

When a pair of film noir icons like Lizabeth Scott and Dan Duryea collide, sparks are sure to fly. Jane Palmer (Scott) and her husband Alan (Arthur Kennedy) mysteriously have $60,000 literally dropped in their laps. The circumstances seem mighty suspicious to Alan, who wants to turn the money over to the police. But in a materialistic rapture, Jane won't let it go. She doesn't care where it came from, or what danger might ensue - not if it will bring her the luxury she craves. Enter shady Danny Fuller (Duryea, as cocky and menacing as ever), who claims the money belongs to him. Let the games begin! Roy Huggins' snappy script (adapted from his novel) is a complex, breezy and black-hearted homage to James M. Cain and Raymond Chandler. Rapacious housewife Jane Palmer is one of the juiciest female villains in Hollywood history, and Liz Scott's best role ever.

Flicker Alley is excited to present this world-premiere Blu-ray/DVD dual-format edition of Too Late For Tears, restored by UCLA Film & Television Archive and passionately championed by the Film Noir Foundation, with special thanks to the Hollywood Foreign Press Association. Together with Woman on the Run, this film marks the first collaboration between Flicker Alley and the Film Noir Foundation.

4.3 out of 5 stars
4.3 out of 5
31 customer ratings
How does Amazon calculate star ratings?
Amazon calculates a product’s star ratings based on a machine learned model instead of a raw data average. The model takes into account factors including the age of a rating, whether the ratings are from verified purchasers, and factors that establish reviewer trustworthiness.

John FowlerTop Contributor: Classical Music
TOP 1000 REVIEWER
5.0 out of 5 stars Fabulous Film Noir - Finally Given the Deluxe Treatment
Reviewed in the United States on February 8, 2016
Verified Purchase
1949: Lizabeth Scott and her husband are driving down a California highway in their convertible.
A car drives up beside them and someone throws a suitcase into their back seat, then takes off.
No it's not a bomb.
When they open the suitcase, it's full of money.
The husband (Arthur Kennedy) wants to report it to the police, but Lizabeth Scott has different ideas.

This is probably the most preposterous opening to a Hollywood movie ever,
but "Too Late for Tears" is a wonderful example of film noir.
One of the few with a female protagonist driving the plot.

Lizabeth Scott's life becomes a nightmare from this point on, but I won't provide any details.
I wouldn't want to to spoil the surprises (there are a lot of them).

It's a public domain film, which is both good and bad news.
The Good News is that "Too Late for Tears" has been available on low-priced DVDs for as long as there have been DVDs (Alpha Video, A2ZCDS, Synergy)
The Bad News is that those prints look TERRIBLE.

I saw "Too Late for Tears" on TCM in 2015.
I was surprised by how good the print looked - almost a different film.
Now it's been released in a new Blu-Ray and DVD combo.
A joint production of Flicker Alley, The Film Noir Foundation, and the UCLA Film and Television Archive.

The original negative is lost.
The painstaking restoration process, involving multiple 35mm prints, is detailed in a fascinating five minute mini-documentary.
The picture isn't perfect, but what the UCLA lab has accomplished is nothing short of heroic.

Flicker Alley includes a commentary track with film scholar Alan K. Rode,
plus two mini-documentaries (21 minutes total)
SPOILER ALERT - DO NOT WATCH THESE EXTRAS UNTIL AFTER YOU HAVE VIEWED THE MOVIE,
plus a 24 page booklet. DON'T READ IT EITHER,
English SDH subtitles.
This deluxe treatment is rare for a public domain film .
A bit expensive, but it's a great movie and your money will go to a good cause.

Trivia: The original title for Roy Huggins screenplay was 'Break the Wild Wind'.
I sort of wish they had kept it.

Lizabeth Scott (born 1922) was a fixture of film noir.
Her attempts to move into different genres was hampered by her appearance.
Not that she was too beautiful, but she looked too much like another actress who had a more established career:
Lauren Bacall (born 1924)
See photos 1-3. Can you tell which is which?

Casey62
5.0 out of 5 stars A FRESH LOOK AT A NOIR GEM
Reviewed in the United States on June 20, 2016
Verified Purchase
When it comes to exploring the darker side of human nature, film noir stands as the most potent genre to do just that. But what's most remarkable about it, it accomplishes this by incorporating ingenious methods of getting around a restrictive Production Code that went against the very types of subject matter these films indulged in. Logically, the genre shouldn't have succeeded as well as it did, nor endured as long as it has under such restraining circumstances. And while many noirs have been regarded as great films for decades, others have only recently come to be fully appreciated. A case in point is a nifty number called TOO LATE FOR TEARS (Republic, 1949).

What would you do if you happened to be driving along and someone speeds by tossing a satchel containing $60,000.00 onto the back seat of your car? TOO LATE FOR TEARS shows us one woman's answer to that question - she'd be willing to commit murder to keep the cash. Of course, just how she goes about devising her plan is what generates the nail biting suspense in Roy Huggins' screenplay adapted from his "Saturday Evening Post" serial. With taut, no-nonsense direction by Byron Haskin, the film spares no punches (nor noirish punch lines) in pulling off an unlikely premise as well as offering us a few twists before the disarming climax.

Heading the superb cast are sexy, smoky voiced Lizabeth Scott as the discontented, sociopathic housewife, and slap-happy screen tough Dan Duryea as her reluctant accomplice. Both are driven to each other not out of love or lust, but by their mutual and, in Scott's case at least, all-consuming desire to possess the money. Simply put, this film is about greed and the path of self-destruction it inevitably leads to. Scott and Duryea are likely giving their finest performances here, playing off each other brilliantly with a lethal chemistry that rivals Barbara Stanwyck and Fred MacMurray in DOUBLE INDEMNITY (Paramount, 1944). They're more than ably supported by Arthur Kennedy as Scott's hapless husband, Don Defore as a mystery figure who seems to know more than he should, Katherine Miller as Scott's suspecting sister-in-law and Barry Kelley as a cop who draws his own conclusions.

TOO LATE FOR TEARS has been underrated since its release partly because of its poor box-office returns and the fact that both writer Huggins and director Haskin were dissatisfied with the end result. Another factor is that the film was allowed to lapse into public domain, which led to inferior prints being the only means by which one could see it. Thankfully, this neglect has finally been rectified with Flicker Alley's extensive, exhaustive restoration of TOO LATE FOR TEARS which is available as a Blu-ray/DVD combo edition. Now, audiences can come to appreciate what a marvelous film it is and how well it encapsulates all the typical film noir staples, but in unusually perverse ways.

Bonus features include an absorbing audio commentary by noir historian Alan K. Rode, a mini-documentary on the making of TOO LATE FOR TEARS, a piece on the efforts made to rescue this "lost" noir classic and a 24-page, well illustrated souvenir booklet.

The lesson learned here is it's never too late to rediscover a terrific classic movie.

John Galt
5.0 out of 5 stars Good movie - Good Blu-Ray
Reviewed in the United States on October 12, 2016
Verified Purchase
Wow. I always enjoy seeing Lizabeth Scott in any movie so I am probably a little biased. But she is great in this one as the wife who starts out (mostly) mild and progresses to .... well you have to see it. Good restoration on the Blu-Ray with some short documentaries on the movie and the restoration.
Read more
4 people found this helpful
Helpful
Comment Report abuse

james v dvoracek
5.0 out of 5 stars Worth the price
Reviewed in the United States on June 12, 2018
Verified Purchase
I have this movie in a budget collection package.

I received 2 remastered disks (1 blue ray and 1 DVD)
One of my favorite noir films.
These REMASTERED movies are incredible

Rob Bush
5.0 out of 5 stars A great film noir on a great disc
Reviewed in the United States on February 4, 2020
Verified Purchase
One of the best films noir you've never heard of - Too Late for Tears serves up Lizabeth Scott as one of the vilest femmes fatale you will ever see. She's so nasty she even scares Dan Duryea! This is a must-see for any film noir fan, and the presentation on this disc is clean and beautiful, and may have never looked this good since it was first released.
Read more
Helpful
Comment Report abuse

S. McCallister
5.0 out of 5 stars A Noir Gem Finally Available in a Great Restoration
Reviewed in the United States on June 26, 2016
Verified Purchase
This is an essential film noir that hasn't been available in a restored state before on DVD, much less BluRay. The presence of Lizabeth Scott and Dan Duryea make this a must see, with each of them at their strongest in this story of greed and murder.
Read more
3 people found this helpful
Helpful
Comment Report abuse

Fogcity Reader
5.0 out of 5 stars Great Film & Great Restoration
Reviewed in the United States on November 27, 2017
Verified Purchase
A giant THANK YOU to UCLA, Film Noir Foundation, and Hollywood Foreign Press Assoc., for saving a National Treasure. It's a great film noir and a beautiful DVD/Blu Ray edition, and all the EXTRAS, oh my, thank you so much.
Read more
One person found this helpful
Helpful
Comment Report abuse

Robert R Grand
5.0 out of 5 stars Film Noir Standout !
Reviewed in Canada on December 15, 2017
Verified Purchase
A well done film noir with standout performances by all. The print was clean and sharp. Nice to see some selected film noir classics cleaned up like this. Good plot line with some twists along the way.
Read more
Helpful
Sending feedback...
Thank you for your feedback.
Sorry, we failed to record your vote. Please try again
Report abuse

Page 1 of 1 Start overPage 1 of 1
This shopping feature will continue to load items when the Enter key is pressed. In order to navigate out of this carousel please use your heading shortcut key to navigate to the next or previous heading.
Back
Next
Pages with related products. See and discover other items: arthur kennedy, Best too late for tears, Explore too lates for tears