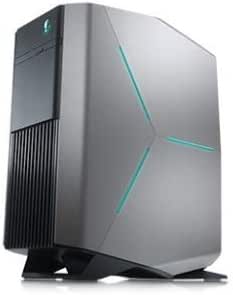 VR-READY FOR TODAY AND BEYOND:The new HTC Vive and Oculus-certified Aurora was engineered to exceed today’s virtual reality requirements and was designed to create the most efficient use of space. The top of the system provides a natural place to rest your VR headset when not in use, and with a conveniently placed handle located near the top, you can organize all your wires in one place, running them to the back of the system and out of the way. With 15 USB ports, this system is more than ready to handle everything needed to attach your VR headset. And with convenient tool-less access, it offers easy upgradeability for the next wave of VR.

EVOLVED, INSIDE AND OUT:The Alienware Aurora features a meticulous, zero-fat design and is the first of its kind to offer tool-less upgrades to graphics cards, hard drives and memory.

Designed to keep cool: Inspired by the thermal ergonomics of the Area-51, the Aurora provides optimal air intake on the front and right panels and an exhaust fan on top for maximum airflow and cooling of internal components.

Packed with power: The Aurora is Alienware’s smallest mid tower gaming desktop ever to offer both dual-graphics and liquid cooling.

PRO-LEVEL GAMING STARTS HERE:Competitive gamers and professional esports teams around the globe leverage the power of Alienware to compete at the highest level. As one of the most successful squads in the world, Team Liquid maintains its lead by designating Alienware as the team’s official gaming PCs, monitors, keyboards and mice.Alienware machines also put the power behind competitive gaming tournaments, like ELEAGUE and ESL, because the best gamers in the world expect gear engineered with the unmatched performance and design only Alienware can deliver.