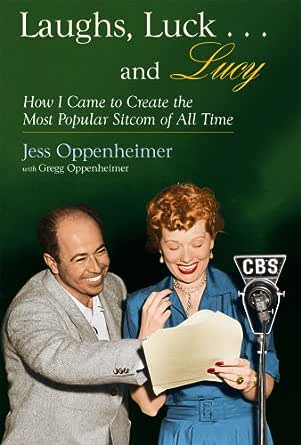 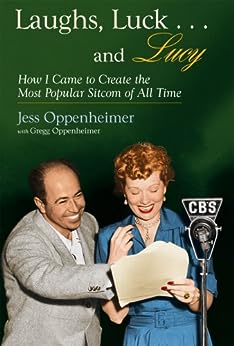 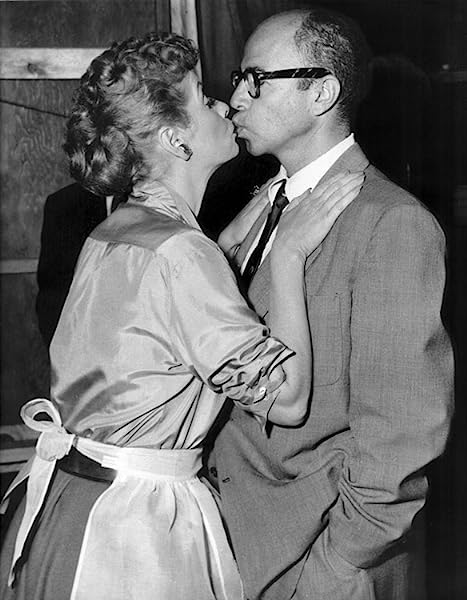 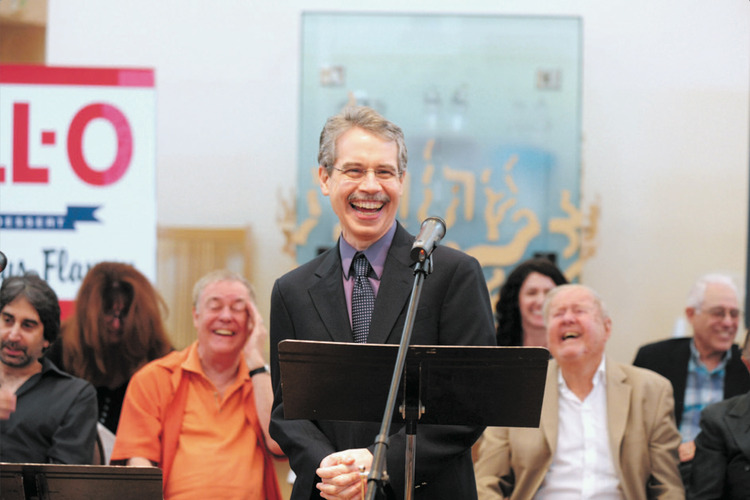 Laughs, Luck...and Lucy: How I Came to Create the Most Popular Sitcom of All Time (with "I LOVE LUCY's Lost Scenes" and rare Lucille Ball audio) Kindle Edition

Laughs indeed as Jess Oppenheimer charts his rise from radio station gofer to inventor of the sitcom, as he winds up writing--then producing--Lucille Ball's show, first on radio, then on television. Luck, too, as the author recounts the good fortune that has him, within minutes of arrival in Hollywood, sitting down at a lunch counter and getting a tip that secures a job within days and a career for life. Ironic, too, that this inveterate TV writer had to be cajoled for years to set down these Hollywood heyday memoirs. He never finished, and it was left to son Gregg to complete the book. All this, plus a reproduced Lucy script, and a CD-ROM filled with famous sketches! --This text refers to an out of print or unavailable edition of this title.

Jess Oppenheimer (1913-88), creator, producer, and head writer of "I Love Lucy," had an extensive broadcast career that began in radio's "golden age," when he wrote comedy for such show business legends as Fred Astaire, Jack Benny, Edgar Bergen and Charlie McCarthy, Al Jolson, Rudy Vallee, John Barrymore and Fanny Brice. His association with Lucille Ball began in 1948, when he signed on as head writer, producer and director of her radio series, My Favorite Husband. When CBS made a deal with the legendary redhead, Lucy made it a condition that Oppenheimer be in charge of the venture. He remained as producer and head writer of "I Love Lucy" for five of its six seasons, writing the pilot and 153 episodes with Madelyn Pugh Davis and Bob Carroll, Jr. After "I Love Lucy" he created and produced such TV series as "Angel," "Glynis" (starring Glynis Johns), and "The Debbie Reynolds Show." His other TV credits include "The General Motors 50th Anniversary Show," "Ford Startime," "The U.S. Steel Hour," "Get Smart," and "Bob Hope's Chrysler Theater," as well as specials for Danny Kaye, Lucille Ball, Bob Hope, Rosalind Russell, and others. He received two Emmy Awards and five Emmy nominations, a Sylvania Award, a Michael Award, and the Writers' Guild's Paddy Chayefsky Laurel Award for Television Achievement; Gregg Oppenheimer began his career as an amateur humorist in 1955, after being introduced by his father to Lucille Ball on the set of I Love Lucy. Lucy kneeled down and asked Gregg, then four years old, "Where did you get those big brown eyes?" Gregg's reply: "They came with the face." Lucy nearly fell over laughing. After a brief stint as a rehearsal cameraman on "The Debbie Reynolds Show," Gregg left Hollywood and attended M.I.T., receiving a degree in Art and Design, and then the Boalt Hall School of Law at U.C. Berkeley. Gregg became a partner in the international law firm of O'Melveny and Myers in 1986. Ten years later, after completing his late father's unfinished memoir, "Laughs, Luck...and Lucy," Gregg decided to give up the practice of law in order to pursue writing and other creative endeavors and to spend more time with his wife, Debbie, and their daughter, Julie. --This text refers to the paperback edition.

If you love Lucy, e-mail me for a FREE Chapter! webmaster@Lucylibrary.com

I grew up on I LOVE LUCY. Yes, I know--YOU did, too. But in my family, it was different. For me, watching I LOVE LUCY has always been a little like watching home movies - and not just because I grew up in and around Desilu Studios. As creator, producer and head writer of I LOVE LUCY, my father infused the show with his own unique sense of humor - something he wielded with equal skill at the studio, at our dinner table, and on family outings. His greatest delight was to crack us up with comical off-the-cuff remarks and funny stories. Many of them ended up on I LOVE LUCY, and the best have made their way into LAUGHS, LUCK...AND LUCY. So this book, which Dad and I began together, is my own "gift of laughter" to Lucy fans everywhere. --This text refers to the paperback edition.

A hilarious memoir from Jess Oppenheimer, the man Lucy called "the brains" of I Love Lucy

A dear friend and a true genius. I owe so much to his creativity and his friendship. He put the word 'love' in our title, and for that I will always be grateful. - Lucille Ball

One of the top comedy writers in radio and television. - GEORGE BURNS

"Jess Oppenheimer, the genius behind I Love Lucy, has given us a rare first-hand look at how it all began. This is a terrific book--warm, fascinating, and full of laughs." - PETER FALK

"I thoroughly enjoyed Laughs, Luck . . . and Lucy, a revealing glimpse into the world of radio and television comedy and an eye-opening look at the creation of 'I Love Lucy.'" - LEONARD MALTIN, Correspondent, Entertainment Tonight.

"Jess's stories of Lucille Ball, Jack Benny, Edgar Bergen, Marlene Dietrich, Fred Astaire, and John Barrymore are hysterically funny. And fascinating. A must read for anyone who loves the entertainment industry." - JANET LEIGH

"For those of us who worked during the golden years of radio and television, Jess Oppenheimer's book is truly a trip down memory lane told with humor, understanding, and accuracy." - RALPH EDWARDS --This text refers to the paperback edition.

This old-fashioned showbiz memoir, completed by son George after father Jess' death, is comfortable in tone and never wallows in scandal. Jess Oppenheimer knew Lucy, the TV character, from the beginning, and his star is chained to hers, not least because of the forgettable shows he created after Lucy. He started with Lucille Ball in 1948 as producer, director, and head writer for My Favorite Husband, her radio series and the forerunner of her TV show, I Love Lucy, the sitcom from which all subsequent sitcoms seem to flow and naturally the focus here. To his credit, Oppenheimer lays out the obligatory inside tidbits without laying them on. Yes, Vivian Vance disliked William Frawley, a matter Oppenheimer places in context, just as he does Desi Arnaz's battle for more creative freedom and a larger role on the show. And he gives us the inside scoop on Gale Gordon, too! Oppenheimer's fond reminiscence is an important addition to the burgeoning collection concerned with TV's early years and subsequent effects on popular culture. Mike Tribby --This text refers to an out of print or unavailable edition of this title.

Intimate glimpses of the world's favorite redhead--and of a bygone era as wide-eyed and irrepressible as Lucy herself. -- Total TV Magazine, October 12, 1996

Jess Oppenheimer, the man Lucille Ball called the "brains" of I Love Lucy, gives us a rare first-hand look at television history as it was being made. A rich entertainment resource, Laughs, Luck . . . and Lucy features a hilarious memoir, more than fifty rare photos, three never-before-published scripts (including the only I Love Lucy script that Lucy or Desi ever refused to perform), and an AUDIO COMPACT DISC of Lucy's classic radio comedy performances, unheard for more than 40 years! Oppenheimer's book, written with his son, Gregg, is not only a reliable record of how I Love Lucy was conceived an executed, but also a humorous insider's account of the broadcasting industry's development from the wild early days of radio to television's "golden age." -- Book Description --This text refers to the paperback edition.

If you love Lucy, you'll love this book (and CD). --This text refers to the paperback edition.

Frequently patting himself on the back, the classic program's producer and head writer herein tells the backstage tale. The tape is less an abridgment of the book he wrote with his brother Gregg than an audio "version," with audio snippets from the series and its radio predecessor, "My Favorite Husband." However dubious it may be as TV history, the audio gains considerable grace and charm from these excerpts, as well as from the fascinating anecdotes and the amiable, codgerly narration of Larry Dobkin. A very enjoyable listen and a must for "Lucy" fans. Y.R. (c) AudioFile, Portland, Maine --This text refers to an out of print or unavailable edition of this title.
Read more