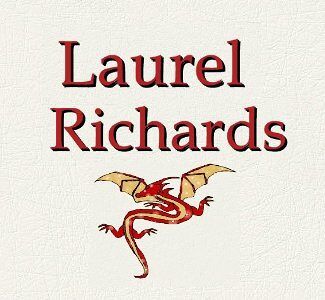 Laurel Richards is a fiction author with a passion for shifters, space travelers, and other memorable characters. She has gathered inspiration from lots of different sources throughout her life and is here today to share her imagination through storytelling. Laurel writes sci-fi/fantasy, paranormal, and funny mysteries, with various degrees of romance mixed in. Visit Laurel's website at https://author-laurelrichards.blogspot.com and follow her on Twitter at https://twitter.com/Laurel_R_books. 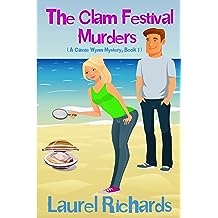 The Clam Festival Murders (Cassie Wynn Mystery Book 1) Apr 30, 2016
by Laurel Richards
( 2 )
$3.99
Nothing ever happens in a small clamming town like Fatmire, FL. At least, that’s what Mitch Chase thinks until he teams up with eccentric mystery writer Cassie Wynn to solve a murder. Vicki Cash is found facedown in her seafood dinner after someone at the Clam Festival slipped her a deadly ingredient. Now Mitch and Cassie have to eliminate suspects, but that’s easier said than done. Vicki wasn’t exactly well liked. She took her ex-husband for everything he was worth, evicted the town’s most successful clam farmer, feuded with her sister, and bad-mouthed the mayor’s wife. As they investigate, Mitch discovers this small town isn’t what it seems, and he’s attracted to more than Cassie’s powers of observation. With his quirky and intriguing partner by his side, he’s sure to lose his heart while he catches a killer.
Read more
Other Formats: Paperback 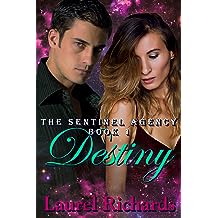 Destiny (The Sentinel Agency Book 1) Jan 12, 2022
by Laurel Richards
( 1 )
$2.99
Undercover operatives have discovered Delfina has the power of foresight, and they want to capture and use her. Accompanied by her emotional support animal, Delfina uses her ability to stay ahead of her pursuers. The one thing she doesn’t foresee is Rave. The Imperian male claims she’s his genetic match, but he has so many aliases that she’s not sure if he’s the good guy or the bad. Attraction ignites as they are thrown together by mysterious government agents, a wildlife trafficking syndicate, and a covert agency that recruits people with unique talents. Secrets, passion, and intrigue collide in this sci-fi romance. 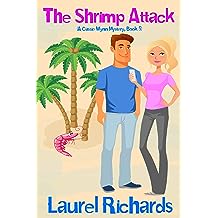 The Shrimp Attack (Cassie Wynn Mystery Book 5) Jun 26, 2019
by Laurel Richards
$3.99
Murder in a crowded room. When private investigators Cassie and Mitch attend a party to kick off their town’s first Shrimp-a-thon, they don’t expect the hostess to wind up dead on the floor. Now Cassie and Mitch must account for all the guests and figure out who had a motive to kill Dr. Tanya Prasher. The doctor made a lot of enemies when she built her monstrous pink house and struck deals that hurt local companies. Is the killer a wronged businessman? An angry ex-employee? A vengeful neighbor? Or is he or she someone much closer to the victim? If they can figure out the motive for the attack, then maybe they can identify the killer.
Read more 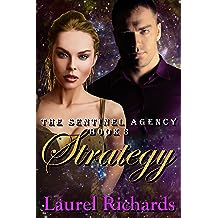 Strategy (The Sentinel Agency Book 3) May 18, 2022
by Laurel Richards
$2.99
For years, Ryland Ward has known Dr. Casey Haven is his soulmate, but he hasn’t been able to claim her. His own cousin abandoned her and their son, leaving her with a broken heart. Ryland has waited for her to heal so he can prove he’s much more than a friend.

Casey has always been able to depend on Ryland. As a trans woman with a psychic ability to heal, she isn’t accepted by everyone. When her medical knowledge is needed for an undercover mission with Ryland, she doesn’t hesitate. She’ll do whatever it takes to stop the bad guys from deploying a biogenetic weapon that could kill everyone she loves.

With a dangerous operative plotting an attack and a black ops organization stalking the members of the Sentinel Agency, the stakes have never been higher. These star-crossed lovers will have to come together to save the universe. 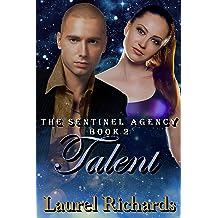 Talent (The Sentinel Agency Book 2) Mar 16, 2022
by Laurel Richards
$2.99
Andromeda is still trying to get used to her prosthetic arm and leg after a terrorist bombing left her injured. Through her work with the Sentinel Agency, she’s determined to stop the bad guys and keep innocent people from getting hurt.

Luka Stiles used to be the top supermodel in town. When the advertisers drop him and his film career fizzles, he’s left drowning his sorrows at the bar. He coasts along on his former fame, which happens to score him an invitation to an exclusive charity auction.

Andromeda must team up with Luka to get into that auction and hack the computers. She believes the foundation hosting it may be funneling money to terrorists, as well as trafficking in protected wildlife.

Together, Andromeda and Luka will face the rich and famous, high-tech security, evil science experiments, and government agents who aren’t at all what they appear. 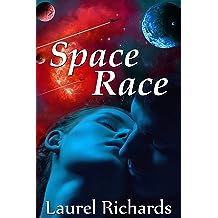 Space Race Sep 25, 2019
by Laurel Richards
( 1 )
$3.99
The race is on! Maxton and his family are entered to compete in the big land rush on planet Caerus. This is the opportunity of a lifetime. The problem? Everything seems to go wrong. Their secondhand ship keeps breaking down, their cousin goes missing, and someone steals half their funds. They have to turn to a staffing agency to get somebody to take a look at their shipboard computers.

When Clara accepts a temp job aboard the Merit, she figures she’ll only be on the ship for about an hour. That’s all the time she needs to run a diagnostic on the computers, but then Max shocks her with an invitation to join his team. The man is handsome and single, and participating in the competition could change her whole life. But can they win?

Although this ragtag group may not look impressive from the outside, they have strength, determination, and smarts. They’ll need all those qualities if they want to win this amazing space race.

Content: This book contains a sweet romance, a dilapidated space ship, and a great deal of running.
Read more 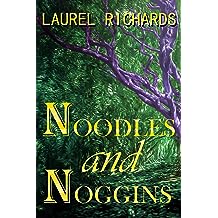 Noodles and Noggins Jul 14, 2018
by Laurel Richards
$0.99
Inspired by Alice’s Adventures in Wonderland, this zany contemporary fantasy follows Alyssa Galey, who falls asleep researching vacations online and is led by her computer mouse to the Morpheus Resort. She encounters strange characters along the way, including a scholar writing his doctoral dissertation on “functional noodles” and a ruthless CEO who is likely to make heads roll. Will Alyssa enjoy her time at the resort? And will she ever get home again?
Read more 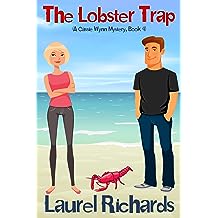 The Lobster Trap (Cassie Wynn Mystery Book 4) Jun 1, 2018
by Laurel Richards
$3.99
After their honeymoon, private investigators Mitch and Cassie take on a new case on Florida’s Gulf Coast. Rudy Cannelli was run over by a boat while diving for a giant lobster, and now he’s convinced someone is trying to kill him. He hires Chase Investigations to track down his would-be killer, but unfortunately, everyone from his ex-wife to his lawn man has a reason to want him dead. Can Cassie and Mitch identify the culprit in time to save their client? Will they get a nice dinner out of the bargain, or is the promise of lobster a trap to get them to take this case? Join Cassie and Mitch as they expand their PI business into new territory and try to find justice for a victim who isn’t dead…yet.
Read more
Other Formats: Paperback 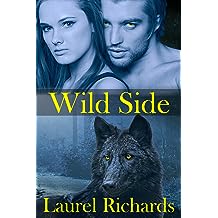 Wild Side Oct 1, 2017
by Laurel Richards
$2.99
What if becoming a werewolf was as simple as joining a club? Lori has no idea what she has gotten herself into when she and her friend Tina try to join the Lycanthropic Society. She thinks she is applying for membership in an outdoor group, although she really just wants to get close to Dominick. He’s the sexy guy whose family runs the Society, and he seems to know things about her instinctively. Lori is even willing to go up against Angelique, her competition for Dominick’s affection. But can she handle a man whose love bite draws blood? And what does he mean his nipping her was her initiation? 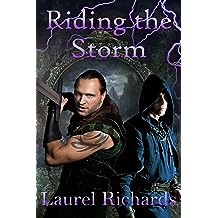 Riding the Storm Sep 2, 2017
by Laurel Richards
$4.99
Nobody knows better than Jeorek that a Stormrider without a sorcerer is nothing but unfulfilled potential. When he finally finds a young man with a resonant aura, however, he discovers that the sorcerer fate has bequeathed him isn’t anything like what he expected. At first glance, Dare is a mute, crippled slave with no discernible power, but he soon proves to be far more than he appears. He’s not only a nobleman’s son, but he’s also one of the most powerful Illusionists in the empire. So how did he wind up as a slave? As Jeorek learns about his sorcerer’s shadowed past, he must gain Dare’s trust to unravel the mystery that surrounds him before the young man’s enemies become his own. In a world where magical illusions can obscure reality, will he be able to see the danger coming? What’s more, will he be able to weather the storm?
Read more
Other Formats: Paperback 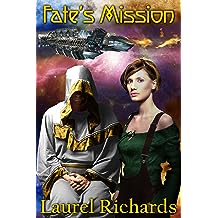 Fate's Mission Jun 1, 2017
by Laurel Richards
$4.99
A love that was fated. A truth that can destroy a man’s faith. And a conflict generations in the making.

When a historical discovery threatens his religious Order, Brother Reinn jin Domarr is sent to investigate. What he finds is a hotbed of political intrigue, assassination attempts, and religious warfare. Someone doesn't want him to uncover the truth, and he or she is willing to kill to protect a terrible secret. In the midst of danger, he finds his soul mate. Isibel is a woman on a mission to save her people from enslavement, and she has her own enemies. Soon their fates collide, and they face a battle that has been brewing for centuries. Will love and faith be enough to save them?
Read more
Other Formats: Paperback 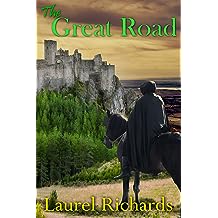 The Great Road Apr 15, 2017
by Laurel Richards
$3.99
When Queen Adhira’s city is attacked and she’s captured by the winged sorcerer, Surtur Takkar, she calls to her twin brother for aid. As Arnon sets out on the Great Road to reach his sister, he is accompanied by a Seer prince, a stable boy with more bravery than brawn, and a reluctant hero who is the only one who can defeat the sorcerer. From warrior women to obnoxious tree-dwellers, they meet all sorts of friends and foes on their journey. Anything can happen on the open road, and loyalty and friendship are put to the test as they leave their homes behind to save the ones they love.
Read more
Other Formats: Paperback