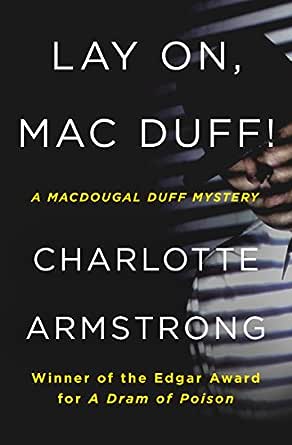 You've subscribed to The MacDougal Duff Mysteries! We will preorder your items within 24 hours of when they become available. When new books are released, we'll charge your default payment method for the lowest price available during the pre-order period.
Update your device or payment method, cancel individual pre-orders or your subscription at
Your Memberships & Subscriptions
There was an error. We were unable to process your subscription due to an error. Please refresh and try again. 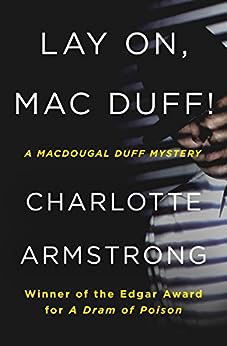 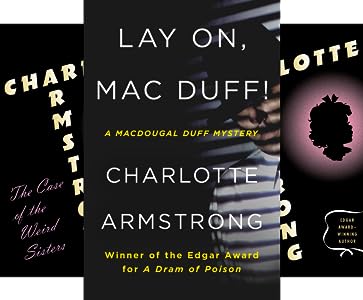 Charles van Buren
TOP 500 REVIEWER
4.0 out of 5 stars Good but a little wordy
Reviewed in the United States on July 7, 2020
Verified Purchase
So far as I can recall this is the first Charlotte Armstrong mystery I've read. Despite this one being overly wordy I will probably try another.

It is a very clue driven book replete with timetables, clocks, temperatures, motives, possibilities and involved discussions of same for the armchair detective to puzzle over. I prefer more emphasis on the characters than the puzzle. I have little interest in closely examining such things as time tables. Fortunately Ms. Armstrong gives us both puzzles and interesting characters and no diagrams. However the group attempting to solve the mystery do blather on a bit much without really advancing the puzzle solving or character development.

Sometimes an epilogue is a nice thing at the end of a book. In this case, Chapter 19 which serves as an epilogue, is wordy and unnecessarily drawn out like some other parts of the book. But it does serve to leave readers with a good feeling. As the old chestnut goes, "All's well that ends well."
Read more
Helpful
Comment Report abuse

Jon W. Florey
3.0 out of 5 stars Pleasant enough
Reviewed in the United States on April 1, 2019
Verified Purchase
It was OK, I finished it, but I'm not looking for more books by Charlotte Armstrong.
Read more
Helpful
Comment Report abuse

Tracet
5.0 out of 5 stars Smart and fun
Reviewed in the United States on April 22, 2017
This was so much fun. I had no idea Charlotte Armstrong wrote like this – I thought of her as "just" a writer of gothics. But this was a lovely little (in that it wasn't terribly long) classic mystery, and it sets in me a deep need to go get more Armstrong. That's one of the great things about reading authors who are now finished and gone – their body of work is extant and ready to be devoured.

Her character descriptions are wonderful.

- His voice was rich and deep and softly on a leash, as if there were volumes more of it, as if he could, if he wished, fill the whole stairwell with sound and as if it would be no effort at all for him to do so.
- He used a caressing (I suppose he thought it was fatherly) tone when he spoke to her, but all the time his eyes were running busily up and down on errands of their own.
- He had another man with him, a kind of echo, who stood and fastened his eyes on us as if he'd read how to do it in a correspondence course.
- "J.J. Jones?" "Clear and warm," I said, feeling sleepy, "and bright and warm."

Even the main character, Bessie, who is the tale's narrator, comes off the page vividly. She is young, naïve, smart, trying to stay afloat in a new atmosphere. "It just seemed to me that somebody ought to stay home and worry." She makes an assumption about the murder that occurs and runs away with it, perhaps fogging the truth, at least for the reader following her through the events. Before long, she's clinging to the only solidity she can find in Mr. J.J. Jones, not sure who else to trust. (She's actually not so naïve as all that, perhaps: "Look, Bessie, have you never read The Sheik?" "Of course I read it. It was forbidden.")

It's a smart book. MacDougal Duff comes into the picture as a very clever friend of Jones, who is expected to unravel the mystery. And Armstrong's handling of his name is terrific. There's a lesson to be learned here:

"But listen, don't say anything to him out of Shakespeare."
"Wh–what?"
"Mac's likely to think poorly of people who say 'Lay on, Mac Duff' to him. He says an intelligent person thinks of it, and realizes it's been said, and passes up the chance. But a dumbbell is so pleased with his own cleverness, he always says it."

(I learned another lesson as well – I didn't know there were twenty blocks to a mile in New York. Filed away for reference.)

For so short a book, there are some wonderful mini-essays, such as on the connection between history and detection and imagination, and whether there is such a thing, truly, as cold-blooded murder. And charity – "so often a mistake unless one knows exactly what one is doing."

This is a solid, thoughtfully told mystery, told with an assurance and flair that lets it fit very nicely into the Golden Age of mysteries. The accidental red herring of Bessie's assumption, the way the events of the game of Parcheesi at the start of the story are told – so serious when Bessie tells it, but so easy to dismiss – so hard for someone who was not there to take seriously, but so sinister … It was just a game. Right?

The usual disclaimer: I received this book via Netgalley for review, with thanks.
Read more
4 people found this helpful
Helpful
Comment Report abuse

Sam
5.0 out of 5 stars One of my faverites !
Reviewed in the United States on May 26, 2010
I love this book . My copy was used when I found it . But it's one I will never part with . I hope one day it will be reprinted .
Read more
3 people found this helpful
Helpful
Comment Report abuse
See all reviews from the United States