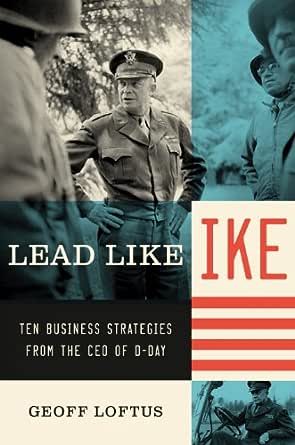 Lead Like Ike: Ten Business Strategies from the CEO of D-Day Kindle Edition

“A novel, intriguing – and more importantly – highly instructive approach enabling us to truly grasp fundamental management principles. In the person of Dwight Eisenhower planning and executing the D-Day landings and the subsequent liberation of Europe, these basic concepts are vividly brought to life. As Loftus rightly observes, no CEO ever face a more daunting, pressure-filled, obstacle-laden mission than did Ike. Perfect reading for these turbulent times.” – Steve Forbes, Chairman & CEO, Forbes Media

“Geoff Loftus has written an intriguing and highly useful book on Dwight Eisenhower’s extraordinary ability as a leader. If you liked Ike before, you’ll like him even more now. And you’ll be grateful to Geoff Loftus.” – Christopher Buckley, author of Boomsday and Thank You for Smoking

“In Lead Like Ike, Geoff Loftus provides keen insights on management lessons drawn from one of the greatest battlefields in military history. The lessons may appear simply, but it’s the simplest management principles that we often forget: Listen to your people. Set your vision. Be consistent about your message. Let your managers manage.” – Salvatore J. Vitale, Senior Vice President, The Conference Board --This text refers to an alternate kindle_edition edition.

Geoff Loftus, a lifelong history buff, is Vice President, Communications, of the Society of Corporate Secretaries and Governance Professionals, Inc. He has been an editor and writer for more than 25 years in print, television, radio and on the Internet. He has addressed large audiences from Fortune 500 companies on numerous business topics. He has been interviewed by Forbes, Fortune, The New York Times, and The Wall Street Journal, in addition to Compliance Week, Directors & Boards, and Corporate Boards. Mr. Loftus was Managing Editor of Across the Board, a monthly business magazine of thought and opinion at The Conference Board, and he was the first director of The Conference Board’s website, which won numerous awards during his tenure. He has also written and co-written original screenplays and teleplays, including two that were broadcast on television.

3.7 out of 5 stars
3.7 out of 5
73 customer ratings
How does Amazon calculate star ratings?
Amazon calculates a product’s star ratings based on a machine learned model instead of a raw data average. The model takes into account factors including the age of a rating, whether the ratings are from verified purchasers, and factors that establish reviewer trustworthiness.
Top Reviews

Bruce
4.0 out of 5 stars 'Ten-hut!'
Reviewed in the United States on June 25, 2013
Geoff Loftus has written an interesting book on the leadership of General Dwight D. Eisenhower as the CEO of D-Day Inc. The author makes apt parallels between the scope of managing a huge operational effort such as D-Day - known as Operation Overlord - and the skills required to run a global, multinational corporation.

Candidly, the stakes associated with the Allied invasion of Europe were far higher than the risks associated with a company's attempt to compete by taking market share from an established competitor. Nevertheless, there are aspects germane to both that remain analogous.

There is an over-riding historical narrative that depicts Ike as he matures in command. His strengths and weaknesses as a commander are portrayed honestly. Roosevelt, Churchill and Stalin are cast as the Board of Directors while colorful personalities such as Gen. George Patton, Field Marshall Montgomery and Omar Bradley are among the key managers reporting to Ike.

For those of us who have logged professional time within the structure of the military and / or corporate America the interpersonal dynamics of the organization here will strike a familiar chord; one that I am glad to have experienced, but equally grateful from which to be currently removed.

There are quite a few literally battle-tested leadership strategies presented in the course of the story line. The author takes the time to `debrief' at the conclusion of each chapter to reinforce those principles that made all the difference between failure and success.

Today's crop of upcoming managers who aspire to leadership positions or to be a CEO will be well-served to read this book. I'm particularly interested in how this book will be interpreted by those managers who served in Iraq and Afghanistan, who rise to the level of CEO.

James Gallen
VINE VOICE
4.0 out of 5 stars Learn From Ike- To Lead Like Ike
Reviewed in the United States on November 22, 2010
Vine Customer Review of Free Product( What's this? )
Did you ever wonder what management principles go into the prosecution of a war, what business lessons can be earned from its study? "Lead Like Ike" provides a good case study of the management lessons to be learned from the greatest martial enterprise of all time, D-Day, Inc.'s assault on its German competition. This book is part history, part management case study and always attention grasping.

Author Geoff Loftus follows Dwight Eisenhower's leadership from his assignment as Commander of Overlord through to Victory in Europe, periodically interrupting the narrative with sidebars to emphasize the management principles employed by Ike and drawing comparisons to similar steps taken by business leaders.

Loftus takes the reader through ten strategies for success and shows how Ike succeeded and, in some instances, failed, in each of them.

Strategy No. 1: Determine Your Mission- D-Day, Inc.'s mission, "unconditional surrender," was determined by its chairman of the board- Franklin D. Roosevelt. Ike achieved that out without an eloquent mission statement, but with incessant concern for his workers who would carry the mission to a successful conclusion.

Strategy No. 2: Plan for Success-Ike asked the question of whether D-Day, Inc. could have survived without Overlord and correctly concluded that it could, but could not afford continued operations if it did not take a chance on Overlord. He then made his plans accordingly. Loftus compares that to the Japanese companies who, when they needed to set up plants in the U.S., assured that those plants would maintain their companies' reputations for quality. He contrasts then to GM and Chrysler who failed to plan for success by not designing and building fuel-efficient cars.

Strategy No. 3: Stay Focused-Recognizing the need for a port to support the build-up, Ike stayed focused when he placed the western-most beach of Overlord, Utah, within reach of Cherbourg. He lost his focus when he let Montgomery pursue Market-Garden while ignoring the need for the port of Antwerp. Loftus then brings up the examples of two profitable companies, Enron and Arthur Anderson, that let the pursuit of more profits distract their focus to the companies' destruction.
Strategy No. 4: Prioritize- Ike knew that he needed the strategic air forces for the Transportation Plan preparatory to D-Day and risked his job to get it. He got what he needed, and it worked.

Strategy No. 5: Plan to Implement-Ike laid out the plans; Who-Hundreds of thousands of men who would be trained for their missions; What- five divisions that would assault the beaches; Where- Normandy, close enough to England bur far enough from Calais to create surprise; When- When light, tides weather and moonlight were right; How-A million details.

Strategy No. 6: Communicate- Ike communicated with his board, primarily Roosevelt and Churchill, to keep them on board with the program and to maintain support for what D-Day, Inc. needed. He also communicated with his generals by letting them know what was expected and with his men by visiting them, sometime with the result that they cheered him up. His one failure to communicate was evidenced by the incessant bickering with Montgomery.

Strategy No. 7: Motivate your People-Make sure that the enlisted men have the same access to jeeps for recreation as the officers and that captured wine would be shared equally. Compare that to Henry Ford who made sure that his early workers could afford the cars that they built.

Strategy No. 8: Manage Your People-Ike put his personal feelings aside and employed his people to the greatest advantage, whether that meant putting up with Patton's antics, Montgomery's insubordination or promoting a quiet performer like Bradley.
Strategy No. 9: Avoid Project Creep-An early failure when Overlord became Torch (North Africa), which became Husky (Sicily) which became Avalanche (Italy). A wiser Ike avoided Project Creep when he rebuffed attempts to capture Berlin at the expense of the mission of destruction of the German Army.

Strategy No. 10: Be Honest- Ike recognized his mistakes in North Africa, leveled with the press about Patton's slapping a soldier and was ready to accept responsibility had Overlord failed. What businessman could do more?

There you have it, ten steps to success in business or war. Whether you are a business person, a history buff or a combination of the two, "Lead Like Ike" is a book that you will enjoy and from which you will profit.
Read more
3 people found this helpful
Helpful
Comment Report abuse
See all reviews from the United States