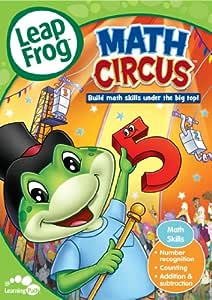 Rated:
NR
Format: DVD
4.7 out of 5 stars 241 ratings
See More
Available at a lower price from other sellers that may not offer free Prime shipping.

Step right up to the Math Circus! Watch the Quidget Family and the Subtractobats perform high-flying feats of mathematics! In this astounding story, Leap, Lily, Tad and wacky Professor Quigley train numbers to count, add and subtract in a series of amazing circus acts. Numbers and Quidgets fly from trampolines, trapezes and cannons as they teach early mathematical concepts. As with all LeapFrog DVDs, humorous songs add to the fun and help reinforce educational concepts in an amusing and memorable way.

4.7 out of 5 stars
4.7 out of 5
241 customer ratings
How does Amazon calculate star ratings?
Amazon calculates a product’s star ratings based on a machine learned model instead of a raw data average. The model takes into account factors including the age of a rating, whether the ratings are from verified purchasers, and factors that establish reviewer trustworthiness.
Top Reviews

AmazonObsessed
5.0 out of 5 stars Great Learning Tool!
Reviewed in the United States on December 6, 2019
Verified Purchase
Love these DVDs! Honestly my daughter has learned so much from Tad and friends. We bought the letter factory first and my daughter knows the whole alphabet and what sounds they make. So we decided to buy the Math Circus and it’s a little over her head -she is 3 years old- but it helped her cement knowledge of her numbers and and counting, while introduce her to addition and subtraction. Recommend this series!
Read more
Helpful
Comment Report abuse

SophieAsher
2.0 out of 5 stars I was wrong
Reviewed in the United States on September 3, 2007
Verified Purchase
In my first review (quoted below), I detailed the disappointments we felt with this video. And truly, compared to the reading Leap Frog videos, it *is* inferior. However, our 6 year old kindergartener has learned more than we realized from watching it. He'll spontaneously bring up math equations he knows the answer to (from the video), which sparks others which he does not know (3 + 3 + 3 = 9...but what is 6 + 3?, for example). He's excited and interested in math and counting, which is priceless. If I could change my star rating to a 3 1/2 or 4, I would.

"We have all the reading videos in this series and were really looking forward to the math one. Though my son definitely enjoys watching it, it is far less helpful in actually building his math skills than the others. There's too much information and it's too confusing - widgets or fingers or trapeze artists or whatever - adding sums, subtracting, no repetition...The value in it is encouraging his interest in counting and numbers, but he's not learning anything new at all. The reading videos, in contrast, have sparked his interest *and* taught him a lot about rules of grammar, phonics, basic word building, etc."

Amazon Customer
5.0 out of 5 stars Very good for 2 - 4 year old children
Reviewed in the United States on September 2, 2015
Verified Purchase
My twins are almost three and they ask for this video almost every day. They grasp the concepts that are taught in the video. Counting, adding, subtracting... They talk about the things taught in the video during the day with me and each other. We were mostly focused on letters and their sounds before but this video launched them into the numbers and math world. It's great.
Read more
6 people found this helpful
Helpful
Comment Report abuse

Brandi Renee Burnett
5.0 out of 5 stars We love it!
Reviewed in the United States on August 6, 2019
Verified Purchase
We love LeapFrog! I homeschool my kids, ages 5 and 2, and Leap Frog works perfectly on those days where someone is sick or we just need a break. It's Educational, so they're still learning! My kids really enjoy it, too!
Read more
Helpful
Comment Report abuse

Crystal
2.0 out of 5 stars What a let down
Reviewed in the United States on February 21, 2014
Verified Purchase
We have a lot of the other LeapFrog videos and have watched them countless times, and my daughter still asks to watch them over and over again. My daughter knows all her letters as well as the sounds they make, and can spell quite a few short words and she's only 3. She loves the Letter Factory, the Talking Words Factory, Phonics Farm, the Amazing Alphabet Adventure, Math Adventure to the Moon, Numbers Ahoy, Numberland, Adventures in Shapesville Park, and the Magnificent Museum of Opposite Words. I think we have others too, but those are the videos that come to mind right now because those are the videos we have watched the most.

So, knowing how wonderful all those videos are, when I saw "Math Circus" I got very excited thinking that it would help my daughter with some basic math, because as much as I work with her on things, let's face it: seeing familiar characters and singing fun songs makes it much easier for her to focus and remember things.

I think we've played this DVD twice. It was such a huge let down. My husband watched it with our daughter and told me it was awful. I tried to sit down with our daughter and watch it a few days later, but by the first song, which was so annoying I couldn't even bring myself to sit through any more of it, I got up and listened to it while doing other stuff.

Honestly over half of the video is just counting, it only goes to 10, and it is very repetitive and annoying. Numberland, Math Adventure to the Moon, and Numbers Ahoy all count to ten and they are wonderful with fun songs in them. My daughter can count to 100 with very little help, so she didn't need this video to spend 15 minutes counting to 10.

The Zero always being late and saying, "I'm just a BIG nothing!" is definitely NOT something I need my daughter repeating.

The addition and subtraction parts are random numbers being thrown together without a good order or explanation.

On top of all of that the voices are different which was just weird. Honestly, my daughter has more fun doing addition and subtraction with me when I use her "Lots of Links" and she has never asked to watch this video after the two times it's been played in this house.

I guess this is a "lesson learned" thing. We were able to watch most of the other LeapFrog videos on Netflix before we bought them, and this one wasn't on there, and now we know why. This was such a disappointment I'm not sure if we will be buying any more LeapFrog videos without watching them first.
Read more
7 people found this helpful
Helpful
Comment Report abuse

Suzanne Tecza
5.0 out of 5 stars Five Stars
Reviewed in the United States on May 25, 2017
Verified Purchase
Anything LeapFrog is worth it.
Read more
2 people found this helpful
Helpful
Comment Report abuse

D Schiller
3.0 out of 5 stars Wish it had fast forward through the previews...
Reviewed in the United States on June 17, 2016
Verified Purchase
DVD itself is great but not being able to fast forward through the long LeapFrog previews before the actual "story" isn't cool - especially since we already have almost every LeadFrog DVD there is and we do not need to see previews of them in order to watch this dvd. Overall, we LOVE LeadFrog products and DVDs and will buy them before any other toy or dvd... just this one has this flaw of no fast forward.
Read more
2 people found this helpful
Helpful
Comment Report abuse

sassy gr8gran
5.0 out of 5 stars Great tutorial
Reviewed in the United States on October 7, 2016
Verified Purchase
Five year old great granddaughter loves it. Helped her get through the summer without lost math skills.
Read more
2 people found this helpful
Helpful
Comment Report abuse
See all reviews from the United States

Lia Tanit Thorne
5.0 out of 5 stars We love leap frog
Reviewed in the United Kingdom on January 24, 2017
Verified Purchase
We love all the Leap Frog learning DVDs in this house. They are fun for the kids to watch and they don't particularly realize they are doing math, learning the alphabet and so on. Afterwards, we always sing the simple, catchy songs that are in each one and it helps reinforce everything they've learned. I would recommend these to individuals and also schools and libraries. I hope they come out with more!
Read more
Helpful
Sending feedback...
Thank you for your feedback.
Sorry, we failed to record your vote. Please try again
Report abuse

Amazon Customer
5.0 out of 5 stars toddler loves it
Reviewed in the United Kingdom on February 22, 2016
Verified Purchase
toddler loves it
Read more
Helpful
Sending feedback...
Thank you for your feedback.
Sorry, we failed to record your vote. Please try again
Report abuse

Amazon Customer
1.0 out of 5 stars One Star
Reviewed in the United Kingdom on November 7, 2015
Verified Purchase
It is for zone 1 USA only
Read more
Helpful
Sending feedback...
Thank you for your feedback.
Sorry, we failed to record your vote. Please try again
Report abuse

Donna Dawson
1.0 out of 5 stars One Star
Reviewed in the United Kingdom on January 11, 2015
Verified Purchase
Unable to play dvd as didn't realise it could only be played in the US.
Read more
One person found this helpful
Helpful
Sending feedback...
Thank you for your feedback.
Sorry, we failed to record your vote. Please try again
Report abuse

Jennifer Williams
5.0 out of 5 stars Five Stars
Reviewed in the United Kingdom on July 30, 2014
Verified Purchase
We love all the Leap Frog DVD's
Read more
Helpful
Sending feedback...
Thank you for your feedback.
Sorry, we failed to record your vote. Please try again
Report abuse

Page 1 of 1 Start overPage 1 of 1
This shopping feature will continue to load items when the Enter key is pressed. In order to navigate out of this carousel please use your heading shortcut key to navigate to the next or previous heading.
Back
Next
Pages with related products. See and discover other items: math movies, Best maths for kindergarten, Best maths for preschoolers, Explore leapfrogs for kindergarten