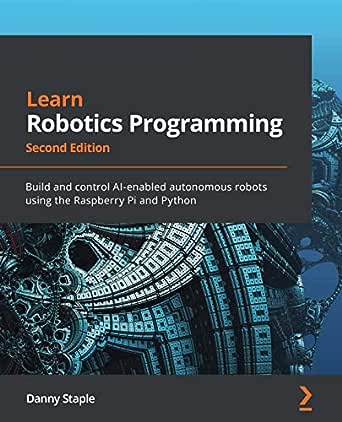 Flip to back Flip to front
Audible Sample Playing... Paused   You are listening to a sample of the Audible narration for this Kindle book.
Learn more
ISBN-13: 978-1839218804
ISBN-10: 1839218800
Why is ISBN important?
ISBN
This bar-code number lets you verify that you're getting exactly the right version or edition of a book. The 13-digit and 10-digit formats both work.

Danny Staple builds robots and gadgets as a hobbyist, makes videos about his work with robots, and attends community events such as PiWars and Arduino Day. He has been a professional Python programmer, later moving into DevOps, since 2009, and a software engineer since 2000. He has worked with embedded systems, including embedded Linux systems, throughout the majority of his career. He has been a mentor at a local CoderDojo, where he taught how to code with Python. He has run Lego Robotics clubs with Mindstorms. He has also developed Bounce!, a visual programming language targeted at teaching code using the NodeMCU IoT platform. The robots he has built with his children include TankBot, SkittleBot (now the Pi Wars robot), ArmBot, and SpiderBot.

4.3 out of 5 stars
4.3 out of 5
32 global ratings
How are ratings calculated?
To calculate the overall star rating and percentage breakdown by star, we don’t use a simple average. Instead, our system considers things like how recent a review is and if the reviewer bought the item on Amazon. It also analyzes reviews to verify trustworthiness.

Gilby
5.0 out of 5 stars From zero to build a robot, just incredible!!!!
Reviewed in the United States on September 11, 2021
Verified Purchase
In August I bought three basic stuff: 1 Raspberry pi 4 and 2 books. One book to learn Python and then this book to learn robotic programming. What a combination!!!! This book is fantastic. English is not my first language, and this book is writing in a very direct and easy way to understand what it is being explained, it is easy to follow. I have read almost one third of the book and I have learned how to communicate my laptop to my raspberry in wireless way, program everything on laptop and then transfer everything through wifi to the raspberry. Even Github, I didn't know what it was and this book help me to understand what is that for providing a basic introduction. And the most incredible and have been building from nothing a robot, it is still basic and I can't stop, I just want to advance next each chapter. If needed, on the editor website you will find all the programs from each chapter for the robot programming. You just need to register to their website to get access to them.
Read more
One person found this helpful
Helpful
Report abuse

Meghan Peel
1.0 out of 5 stars Book has coffee all over it
Reviewed in the United States on February 26, 2021
Verified Purchase
Coffee spilled all over the book.
Read more

1.0 out of 5 stars Book has coffee all over it
By Meghan Peel on February 26, 2021
Coffee spilled all over the book.
Images in this review

Matthew Emerick
5.0 out of 5 stars Comprehensive Overview of Modern Robotics
Reviewed in the United States on February 12, 2021
About This Book
I have had an interest in robotics since I was a teenager. My fiction-addled mind saw it as something easy to learn but difficult to master. With the lack of resources 20+ years ago, I then assumed that it was both hard to learn and near impossible to master. Looking at this book, I now know that my initial assessment was correct. This book is about giving you a foundation in creating a robot using Python and a Raspberry Pi.

Who Is This For?
This is a good book for someone with a Python background that wants to learn about robotics. It's a great way to learn the basics of robotics programming, as it covers the topic from the very beginning and looks at all areas that affect any robot.

Why Was This Written?
Yes, there are other books on robotics, but I like this one as it focuses on Python and the Raspberry Pi. Both are great and easy to acquire resources and in the end, you use them to build a working robot. Personally, I would find ways to expand your robot so that it's not just another Hello World project.

Organization
I LOVE the macro organization of this book. There are four sections: basics, building a basic robot, making the robot smarter, and how to take it even further. This is exactly what I would want for a project-based book. The only thing missing from this book, and this is a huge peeve for me, is that there is no section that talks about all of the hardware needed for the project. Bits and bobs are located in most chapters but don't stand out. I would want to order all of my hardware at once and save time and money. As it stands, you have to order for each chapter.

Did This Book Succeed?
Yes. This is a great beginner book that will give anyone the confidence to create their own robot from scratch afterward. This book is also complete in keeping up with current topics, such as voice commands, pathfinding, and computer vision. It is the one book you need to get started in robotics.

Rating and Final Thoughts
This book is complete and useful, but not perfect. I mentioned before an important feature that was left out. However, that is the only negative that I can really bring up. If you're interested in learning about robotics, get this book.

Gokul S
4.0 out of 5 stars Beginner friendly robot building guide using Raspberry Pi
Reviewed in the United States on May 31, 2021
Brief Review:
This book is primarily geared towards the audience who wants to get a hands on robotics, but don't how or where to start. There reason being that the contents of the book are organized in such a way that a beginner can work through each chapter gradually building up the skill and understanding the different components of a simple robot. The author has also provided a troubleshooting section as part of the chapters to address the common issues which arise while installing or programming a software system. This is a well thought addition to the book as it saves time for the reader while working through the book.

Technical content Review:
The author has really put an effort to make the readers go through the design phase(block diagrams) to converting them to software modules. This is much appreciated as it helps the readers to develop the habit of thinking about the bigger picture before getting into the actual development. The chapters which were my favorite are the ones where the author explains the working of different sensors especially chapter 16 where working of IMU is explained in depth along with hands on examples. Furthermore, each chapter has exercises and additional reading section to help the readers to get in depth understanding of the concepts.

Final thoughts:
I would give this book a rating of 4.0. Overall the book is solid and gives an overview of the robotic concepts. Few places where I felt the contents could have been improved are the section where the web servers were introduced which was little confusing and may not be beginner friendly.
Read more
3 people found this helpful
Helpful
Report abuse

calvinnme
HALL OF FAME
3.0 out of 5 stars There is not one line of code in this book
Reviewed in the United States on July 17, 2021
I have a subscription to Safari online, and this book is visible from that site. Normally Packt publishing stands for "Packed (Packt) with screen shots not with insight" but this book is pretty well written. What brings down its rating? You need a physical copy of the book, as far as I can see, so you can register your purchase with Packt and get to the Python code. So if you buy this book used it may well be useless. And plus I just like to see an author's programming style before I buy.
Read more
2 people found this helpful
Helpful
Report abuse

Anders
5.0 out of 5 stars very useful, inclusive and deep analysis of robotics. from beginners to experts
Reviewed in the United States on May 18, 2021
This is a very useful book for robotics lovers, even for beginners.

The author introduces different kinds of robots, actuators, sensors, hw/sw blocks that are useful in a robot, for beginners; and the method of building a robot with Raspberry Pi step by step.

All in all, this is a book of very inclusive and deep analysis of robotics.
Read more
Helpful
Report abuse
See all reviews

John M
1.0 out of 5 stars I hope I am wrong but seem to have wasted a lot of money on this.
Reviewed in the United Kingdom on April 30, 2021
Verified Purchase
I have tried building an autonomous robot using a Raspberry Pi zero and a BBC Microbit. I ran into problems on both builds as my programming is not up to the task. This book seemed an ideal solution. Follow the book exactly, download the software in case of problems. Great, nothing to go wrong.
I bought a new chassis, a Raspberry Pi 3A, the specified i2c motor controller, a power bank and other bits. With the book it was quite an expensive project.
When I opened the book pages started falling out - literally. I built the robot exactly as instructed. The first program was to drive the robot forward for one secnd and then stop. I typed in the program but the robot ran but would not stop without disconnecting the Raspberry Pi. I thought I must have typed in something wrongly and downloaded the software from the associated web site but the downloaded software behaved exactly the same. I have no idea what is wrong and am stuck, What a disappointment.
Read more
One person found this helpful
Report abuse

fathi
5.0 out of 5 stars clear and to the point ..
Reviewed in France on April 10, 2021
Verified Purchase
with some knowledge of Python and how to deal with classes in python ...this book is the one I was looking for.
The author knows ho to explain and build up the basics to crate a structure and makes it clearer for the reader.
The codes are well documented and not hard to follow .
Pictures and synoptics are also helpful.

thanks a lot..
Read more
One person found this helpful
Report abuse
See all reviews