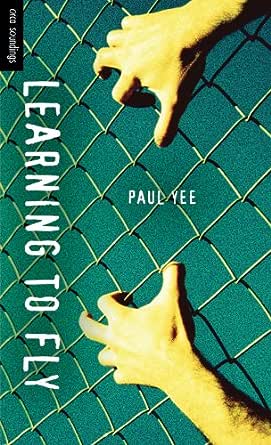 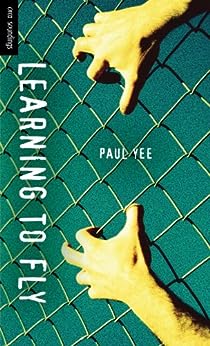 Jason Shen, 17, wants to leave his small town in Canada and return to China, where he and his mother lived until four years ago. His white high-school teachers do not know how smart he is, and his classmates jeer at him. Driven to join the crowd of potheads, he bonds especially with his Native American classmate, Charles (“Chief”). Narrated in Jason’s wry, first-person, present-tense narrative, Yee’s slim novel packs in a lot. The story is comedic in scenes of Jason’s cultural confusion and realistic about racism, both toward the immigrant kid and also within his own family (Jason’s aunt thinks “those Native people are the worst”). Desperate after the police catch him buying drugs for his friends, Jason thinks of suicide, but he finds help in surprising places. The clipped dialogue perfectly echoes the contemporary scene, the harsh prejudice felt by both the new immigrant and the Native American, and their gripping friendship story. Grades 6-10. --Hazel Rochman --This text refers to an out of print or unavailable edition of this title.

The train swings around the curve. Noise and wind swallow me. I jump. Jason is on outsider. A recent immigrant from China, he lives in a close-minded town with his mother and younger brother. Trying hard to fit in, Jason falls in with the wrong crowd and ends up in trouble with the police. Jason finds he needs to fight to belong. Does he have what it takes to make this new place his home? --This text refers to an out of print or unavailable edition of this title.

Jason will try almost anything to fit in. --This text refers to an out of print or unavailable edition of this title.

The train swings around the curve. Its one headlight races toward us. High on the engine's nose, a window glints. The ground is shaking. I watch the train. It comes closer and closer. I dash to the tracks, watching a fence on the other side. Noise and wind swallow me. I jump.

Paul Yee is one of Canada's finest writers for children. He was raised in Vancouver and has worked in the archives at the Vancouver Museum. He won the Governor General's Literary Award for Children's Literature for Ghost Train. He now lives in Toronto. For more information, visit www.paulyee.ca. --This text refers to an out of print or unavailable edition of this title.

"Immigrants, drugs, friendship" --This text refers to an out of print or unavailable edition of this title.

Grade 7–10—An immigrant from China, Jason, 17, struggles with his father's betrayal of his mother when he left her for another woman and the underlying sentiments of racism in a small Canadian town. Smoking pot is his way of coping, and, because of this habit, he finds himself with a new group of friends. While he is happy that some people have accepted him, he also feels that he has fallen in with the wrong crowd. The exception is Chief, a First Nations boy who can identify with some of what Jason experiences as a minority. They both must make life-altering decisions when Jason gets charged with drug trafficking and tragedy befalls Chief's family. While the book should be a draw for reluctant readers, the brevity of the story leaves little room for character development or resolution. Those looking for titles covering similar issues with a broader emotional range may prefer Gene Luen Yang's American Born Chinese (Roaring Brook, 2006) or An Na's A Step from Heaven (Front St., 2001).—Joanna K. Fabicon, Los Angeles Public Library
Copyright © Reed Business Information, a division of Reed Elsevier Inc. All rights reserved. --This text refers to the paperback edition.

"While maintaining young readers' interest in the plot, Yee's novel will also help them to develop and gain confidence in their reading skills.", CM Magazine

"Reluctant readers will be drawn to this book because of the content and its length.", VOYA

"[Yee's] characters and their life struggles ring true and are likely to connect well with teen readers. Written in a fast-paced, easy-to-read style, this book should be successful with reluctant readers.", TeensReadToo.com

"This is a tale about the effects of prejudice and the redeeming power of friendship...A very good selection for reluctant readers in high school who need high interest books.", Tri State Young Adult Book Review Committee

"Engage[s] the reader...This book will be useful in cultural diversity classes or for students who are having a hard time finding their place in school...Recommended.", Library Media Connection

"There's a lot to think about in this small book. It might even be a book read to the end by kids who don't like to read.", Puget Sound Council for Reviewing Children's Media --This text refers to the paperback edition.

4.7 out of 5 stars
4.7 out of 5
2 global ratings
How are ratings calculated?
To calculate the overall star rating and percentage breakdown by star, we don’t use a simple average. Instead, our system considers things like how recent a review is and if the reviewer bought the item on Amazon. It also analyzes reviews to verify trustworthiness.
Top reviews

Amazon Customer
5.0 out of 5 stars WOW
Reviewed in the United States on November 13, 2018
Verified Purchase
I feel like I’m the person who wrote this book. All the details in the book had happened to me. I’m an English Leaner and this is how I’ve felt when I got to America for the first time. This is probably the best I’ve ever read in my life. Thank you for publishing this book.
Read more
Helpful
Comment Report abuse

TeensReadToo
4.0 out of 5 stars Courtesy of Teens Read Too
Reviewed in the United States on January 3, 2009
Jason is seventeen. He spends most of his time helping his immigrant mother run their Chinese deli at the mall. His chief complaint about working there, besides the fact that he works for free, is that people don't look at him when they stop to place an order. Just because he is Chinese it's like they expect him to speak broken English and not have a brain.

Shortly after the family arrived in the U.S., Jason's father left to run off with a younger woman, leaving Jason's mother to handle the business, Jason, and his little brother, Josh, who is fourteen years younger than Jason. His mother is constantly urging him to make friends at school and bring them home with him. But there are two problems with that: 1) no one at school is interested in a friendship with an oddball like Jason, and 2) when he does finally bring a few buddies home, his mother doesn't approve.

Jason's few acquaintances help him discover that a little bit of pot certainly helps make his life more bearable. He knows his mother would never approve, but she doesn't pay enough attention for it to be a real problem. As his frustration with working at the deli for nothing and taking the odd twenty dollar bill from his mother's purse becomes more of a hassle, Jason thinks maybe becoming a dealer would offer enough money and product to keep him satisfied.

However, this new deal also comes with complications, and they might be more than Jason can handle.

Author Paul Yee brings his Chinese-Canadian background to LEARNING TO FLY. His characters and their life struggles ring true and are likely to connect well with teen readers. Written in a fast-paced, easy-to-read style, this book should be successful with reluctant readers.