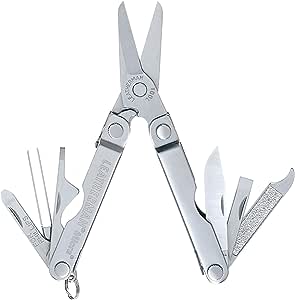 The Leatherman Micra is our most popular mini-tool with anglers, hobbyists and those who can appreciate the best spring-action scissors around. With 10 useful tools packed into this tiny, lightweight Leatherman, it’s the perfect tool for tackle boxes, pockets, purses or sewing kits. Closed Length: 2.5 inches (6.5 cm); Weight: 1.8 oz (51 g); Blade Length: 1.6 inches (4.06 cm).

Actual product packaging and materials may contain more and different information than what is shown on our website. We recommend that you do not rely solely on the information presented and that you always read labels, warnings, and directions before using the product.

4.8 out of 5 stars
4.8 out of 5
1,550 global ratings
How are ratings calculated?
To calculate the overall star rating and percentage breakdown by star, we don’t use a simple average. Instead, our system considers things like how recent a review is and if the reviewer bought the item on Amazon. It also analyzes reviews to verify trustworthiness.

Mg1440
3.0 out of 5 stars Material is less durable...I suspect Chinese sourcing...
Reviewed in the United States on July 11, 2016
Color: Stainless SteelVerified Purchase
I was given one as a gift in 2001, and found it almost indispensable other the years. The scissors were so handy...I used them to snip tie wraps and cut boxes. They got a lot of use and never wore out. Unfortunately, I lost it last year.

I replaced it and to my chagrin, the scissors really struggle to cut through plastic tie wraps and the edges are already marred significantly. I can't imagine what could have damaged it like that - I've only used it for light duty, just like the older set. It appears to be a much softer metal.

It's still a useful tool, but it's a bit disappointing because the original was such an overachiever. In comparison, this seems more like a typical Home Depot/Harbor Freight product than the exceptional "made in the USA" quality product that I have really come to appreciate. It makes me regret losing my old one that much more...

Dan
4.0 out of 5 stars Great "Management" Leatherman
Reviewed in the United States on June 8, 2018
Color: Stainless SteelVerified Purchase
This is a great tool that I use several times a week in a professional office setting. Rather than pliers, it has center scissors that are actually sharp and great for any of the numerous trimming or cutting small tasks; paper, string, thin wiring, etc. The screwdrivers will handle anything from tightening eyeglass screws, to tightening screws on light switch covers, and Phillips screws found on any number of gadgets. The 1" knife blade is a great letter opener and fingernail file/cleaner is my first "go to" for that little job.

Obviously, any of the single purpose tools will do the job more efficiently than the Micra. But it's found a place in my pocket for everyday carry for having all that capability in a quality little package.

This one is a replacement after TSA relieved me of the last one that lasted many years and I was lost without it. I'm disappointed that the new one is the overseas Leatherman "Tool" variety, which isn't quite the same high quality as the Leatherman USA version I had to forfeit. Specifically, the rivet holding the scissors together is sloppy and the knife blade is sharpened only on one side, rather than a full bevel of its predecessor. It's really disappointing for Leatherman to establish itself as a quality brand and then design the quality out of its products. :-(
Read more
15 people found this helpful
Helpful
Comment Report abuse

Andrea Jensen
5.0 out of 5 stars Perfect Key Chain Size Knife WITH Sturdy Scissors
Reviewed in the United States on March 19, 2019
Color: Stainless SteelVerified Purchase
I needed a key ring sized knife for generic use around the house, opening boxes and packaging (Amazon!), AND I needed a better scissors than found on most small and medium sized multi-tool pocket knives. These scissors are sturdy and easy to use, despite their small size. The scissors on my wife's Swiss Army knife are a cruel joke, by comparison. The scissors are the main feature of the Micra design and are the first tool ready to use as you first flip it open.

There is nothing I could find that came close to these scissors in a multi-tool. Not only is the metal of the scissor blades nice and thick for it's size, but the hinges and spring mechanism are also sturdy and well designed, giving that positive springy push-back, and built to last.

I do wish the knife blade were a little thicker, and that it was a bit easier to identify and to unfold the knife, with the tiny little fingernail groove it has. It's okay for my uses, but if you were cutting boxes all day, I'd get a different tool with a thicker blade. Just the nature of Multi-tools, but you have to memorize which side and which half things are on, and I still have not, so it takes fumbling to get to the knife for me. I'mma try putting a permanent marker dot on it and see if that stays on it until I do remember, but it would be nice if there were a tactile/visual cue where the primary features are located so I don't have to open/close to find out.

But the scissors is the reason to buy the Micra for my uses, and it's size, being that it is no longer than my keys when folded up and in my pants/shorts pocket all day. A belt clip sized device is out of the question. I don't use it that much, but I sure appreciate not having to go find a knife/scissors in the garage or desk, and it's with me in the car and wherever I go. I used to just chew through those little plastic ties, which never seemed like a good idea for my teeth.

I looked at videos comparing the Micra with similar offerings from Leatherman and a few major competitors, but none of them had the sturdy scissors/tiny size I needed, and having owned it for a few months now, I know it's the right tool. Having been raised by an Automotive Repair Shop owner, I can tell you there is nothing like "The Right Tool for the Job."

Hope this helps! I appreciated all the Reviews so I knew what to try! Made a good stocking stuffer present for my Wife to give me.
Read more
8 people found this helpful
Helpful
Comment Report abuse
See all reviews

Practical Guy
5.0 out of 5 stars This is the best key-chain multitool period!
Reviewed in Canada on October 15, 2014
Color: Stainless SteelVerified Purchase
This is the best key-chain multi-tool I've owned. It is better than the squirt in numerous areas in my opinion and the design makes more sense. Having scissors is much more logical and useful with something only 2 inches long for light duty use. The other models have pliers and or wire strippers and they are really light duty and very useless for most tasks. The other thing I like is that this has all the tools closing to the inside when folded up. I like the extra security that the knife blade wont likely open up and stick into my leg although I guess that still could happen.

This is what I find better on this Micra versus other models in the same size/class:

- tools open from the inside for an extra layer of safety in your pocket.
- the screwdriver bits are longer.
- the bottle opener is bigger and easier to use.
- There is a full 5 inch long ruler that runs the length of both handles.
- the tweezers cannot be lost since they stay connected to the multi-tool while in use. Still they are precise and work well.
- feels well built and strong
- no plastic parts
- no paint or anodization to wear off. Stainless steel is the way to go!
Read more
4 people found this helpful
Report abuse

Troy Dolyniuk
5.0 out of 5 stars Fantastic pocket multi tool
Reviewed in Canada on February 16, 2017
Color: Stainless SteelVerified Purchase
I love this Leatherman Micra. The scissors work well (though sometimes I need to apply a bit of angular pressure to cut through smaller narrow firm items). The knife is very sharp. I only used the screwdriver once and was careful not to torque it too tightly. It worked well, but remember that this is a mini pocket multi tool, so treat the screwdriver carefully. Overall I'm very pleased with it and will cry when I undoubtedly forget it in my pocket at the airport. :)
Read more
One person found this helpful
Report abuse

ROADIE
5.0 out of 5 stars Great
Reviewed in Canada on May 19, 2020
Color: Stainless SteelVerified Purchase
It was 'handy' almost immediatey. Daughter had a sliver in her hand that I couldn't get out. Checked the multitool and it had tweezers and took care of it. Also used the small flathead to remove screw to replace batteries in children book. DIdn't have to rummage through the tool box.
Read more
Report abuse
See all reviews

Page 1 of 1 Start overPage 1 of 1
This shopping feature will continue to load items when the Enter key is pressed. In order to navigate out of this carousel please use your heading shortcut key to navigate to the next or previous heading.
Back
Next
Pages with related products. See and discover other items: file cleaner, gifts for hiking, firefighters birthday, fishing pier, useful tools, best gifts for college students