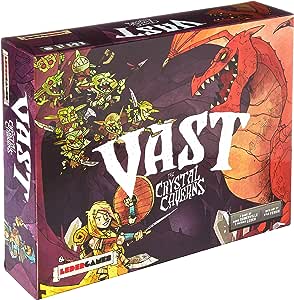 Vast takes you and your friends into the torch light of a classic cave-crawling adventure, built on the concept of total asymmetry. Gone are days of the merry band of travelers fighting off evil. In Vast, you will become part of a new legend… Any part you wish! Play as the classic, daring Knight, the chaotic Goblin horde, the colossal, greedy Dragon, the scurrilous Thief, or even the Cave itself — powerful, brooding, and intent on crushing the living things that dare to disturb its gloomy depths. Each role has its own powers, pieces, and paths to victory … and there can only be one winner.

Not for children under 3 yrs old

4.7 out of 5 stars
4.7 out of 5
87 global ratings
How are ratings calculated?
To calculate the overall star rating and percentage breakdown by star, we don’t use a simple average. Instead, our system considers things like how recent a review is and if the reviewer bought the item on Amazon. It also analyzes reviews to verify trustworthiness.

Each player of this 1-5 player(s) game has a completely different goal in a cave.
Knight - trying to slay the dragon
Goblins - trying to kill the knight
Dragon - trying to wake up and escape the cave (consuming goblins help!)
Thief - trying to get and stash treasures and escape
Cave - trying to collapse on everyone before someone wins.

As each player is going to toward their objective, they also need to keep one another in check.
(Example: cave wants to stall out the game and help the losing character and hurt the winning character)

There is a steep learning curve though. If you want to teach the game, you will need to know all 5 roles well and each role is completely different.
You will most likely make mistakes or forgotten a rule in your first 5 games. (Do note that some roles are harder than others to play)

I have not tried the 3 players and under variants so I can't speak for those yet.
There is a full play-through (4-player) by JonGetsGames on youtube which helped me greatly.

Adam K
4.0 out of 5 stars Unique, creative game that keeps everyone's attention
Reviewed in the United States on November 17, 2018
Verified Purchase
Vast is a fantastic game that provides a fairly unique experience every time and was a hit with all of my friends, some of whom can be pretty picky. Here are some pros and cons, followed by a little blurb from me.

- The tile laying aspect means that every game plays out differently.

- Quite interactive; players keep their focus since it's important to know what all your opponents are doing.

- Well-balanced to the point where it seems like almost everyone has a chance to win till the very end.

- 5 unique roles means it is more complex to get started; there are core rules to follow, but otherwise everyone has their own goals and powers, etc.

- Lots and lots of little pieces and I feel not quite enough bags or space to hold things perfectly.

I was sort of late to the party on this game (released in 2016) but man, once I heard about it, I had to get it. I loved this idea of the asymmetrical roles and yes, specifically the cave being playable. As an artist, I was also very drawn in by the illustrations of Kyle Ferrin.

Anyhow, I told me friends all about it when I first discovered it and not long after I bought it. Upon getting in, I began to read the rules of each character, and then played solo games to get a feel of the roles. Of course, the Solo variants differ quite a bit in terms of the win conditions when compared to the multiplayer variants, so I also tried out a few 2 player and 3 player variants, all by myself though.

I sort of feel like it's ideal to do this in order to have at least SOME idea how the game works before thrusting it upon your friends. I think that having played some games on my own prepared me to teach my friends.

That said, I thoroughly enjoy the game and so did my friends, even though there was a lot of checking rules, searching BGG for answers, etc. To their credit, the designers/developers are very active in online forums, and I was able to get most of my questions clarified that way. In a few cases I even had actual responses directly from them. Hopefully future editions will include revised/more detailed rules though.

All in all, this is a nice solid game that has mechanics that I like, and thankfully my friends like it too, or else I wouldn't be getting much use out of it. It lived up to my expectations and I find it fun. I've even started trying to think of my own custom role or two to invent just for fun!

I recently ordered the Fearsome Foes expansion and also the Bonus Cards, and am having fun teaching myself the new roles. I look forward to trying them with my friends. I also just pre-ordered the sequel, Mysterious Manor, and I'm stoked to get that next spring.

Jason Adler
5.0 out of 5 stars Great dungeon crawler with asymmetry for vast replayability
Reviewed in the United States on September 15, 2017
Verified Purchase
I've only played this game a couple of times, but I already love it. There are so few games with asymmetrical roles, especially ones that do justice to that type of game mechanism, but this one implements it beautifully and really immerses you in the theme of the game. I can't wait to try out all of the combinations!
Read more
4 people found this helpful
Helpful
Comment Report abuse

L. Lowe II
5.0 out of 5 stars Really good. Worth the time to figure out. Recommend 5 players.
Reviewed in the United States on December 17, 2017
Verified Purchase
Great game. You should expect to spend extra time learning during first play. Nothing too complicated about individual player powers or goals, but the 5-way give and take makes for deep player interactions. Felt more political/social than most hidden role games because the divergent goals organicly drive shifting alliances.

My copy had treasure chests that were brown instead of gold. I drew on them to make them look less like dragon poop. And I drew eyes and teeth on my dragon while I was at it. I recommend that too.
Read more

Mike Massucci
5.0 out of 5 stars Great Game!
Reviewed in the United States on July 28, 2019
Verified Purchase
My friends and I can't get enough of this game. It's super fun, but has a fairly steep learning curve. If you can get past learning the rules for the game, it is an absolute blast and has tons to replayability. Highly recommend!
Read more
Helpful
Comment Report abuse

Terry D. Little
1.0 out of 5 stars Complicated to learn
Reviewed in the United States on November 3, 2019
Verified Purchase
This game requires a massive effort to learn. There is a lack of included instructions that leads to a great deal of confusion. Even the creator has had to place multiple videos on YouTube. It can take hours to actually figure out the game and create all the missing rules. This results in so many “local” rules that play is inconsistent. The play is further complicated because each player is really playing their own game, but that game effects the other players.
Read more
Helpful
Comment Report abuse

C Wright
4.0 out of 5 stars Vast Crystal Caverns
Reviewed in the United States on September 21, 2020
Verified Purchase
Seems like a great game. Learning curve is pretty steep. Game box arrived damaged but all parts were there. I think I should receive a partial credit because the game was not in new condition.
Read more
Helpful
Comment Report abuse

Kindle Customer
5.0 out of 5 stars An excellent addition to your game shelf
Reviewed in the United States on March 23, 2018
Verified Purchase
Very unique play mechanics and characters. All characters have vastly different goals, and all players have interaction methodology with all other players. Has loads of replay value, and unique play style. There are cards that will also instruct you on how to make the game play more or less difficult depending on the group, and you tastes. An excellent addition to your game shelf.
Read more
Helpful
Comment Report abuse
See all reviews

Tron
5.0 out of 5 stars Fun but complicated
Reviewed in the United Kingdom on August 20, 2018
Verified Purchase
This game is incredible, there are so many different ways of playing and multiple different and unique roles in the game. All the roles are fun and as far as I can tell well balanced. Teaching and learning the game is difficult since all 5 roles have different rules.
Read more
One person found this helpful
Report abuse

Amazon Customer
5.0 out of 5 stars Great game once you get your head round it!
Reviewed in the United Kingdom on July 18, 2017
Verified Purchase
Complex rules means great replay ability. Can recommend the you tube videos on how to play before starting out though.
Read more
2 people found this helpful
Report abuse

Angela
1.0 out of 5 stars Arrived in bad condition
Reviewed in the United Kingdom on December 8, 2019
Verified Purchase
Bought this from Docsmagic and received a used item instead of a new one. Very unhappy.
Read more
Report abuse

Sk3ith
5.0 out of 5 stars Very fun Asymmetrical game!
Reviewed in Canada on November 5, 2017
Verified Purchase
It takes time to learn(took us a few nights), but having everyone playing different roles and having different goals makes for an incredibly dynamic game. The design team must have spent lots of time playtesting since there are so many different set ups you can have with different amount of players (up to 5). Rules aren't always explained in all forms so some deliberating must be done as to how it is supposed to be, but after playing you usually realise what you were doing wrong.
Read more
Report abuse
See all reviews