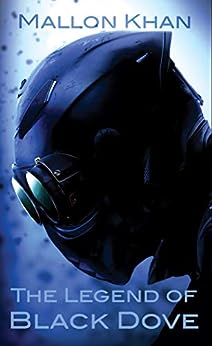 Mallon Khan is an artist and multimedia producer. An immigrant raised in New York City, Mallon has been a graphic designer, animator, voice actor, music composer and producer, and writer. Legend of Black Dove is his second novel. He currently lives in Los Angeles with his wife and cat. --This text refers to the paperback edition.

Virginia E. Johnson
3.0 out of 5 stars Really Bad
Reviewed in the United States on January 19, 2019
Verified Purchase
In this confusing tale nothing is as it seems. The story begins as two heroes, White Falcon and Black Dove invade what they believe is a Satanist group performing the sacrifice of a beautiful girl to bring a Demon among them. A monster does appear and kills White Falcon, Black Dove’s mentor. Black Dove attempts to save the girl, but instead it’s she that saves him. Dubbed the DOB (Disciples of Baphomet) Murders, a local cop, Detective Victor Rodriquez is also killed. Two decades later, his daughter, Cynthia Rodriquez is now a detective, and when the killings start again, she wants to investigate the murders, but her lieutenant, Greg Wells, says no. She will investigate on her own to bring closure to her dead father. Black Dove returns to the scene after spending time in Nigeria, as he wants to help Cynthia.

The story is confusing, and names change for no reason. A group of killers appear in the current time targeting the original nine masked villains at the beginning of the story. Their leader is called Levy, sometimes Ze, and is from the past. With Levy there is a giant and a midget, and a Japanese girl name Hisa, and they are after the Disciples of Baphomet. Or how about this: He heard the sound of a six-shooter and knew six rounds had been fired? Really? Rounds go pop, pop, pop, and he could distinguish a six-shooter from another gun? Amazing.

Spoiler Alert: In the end, we are told the truth and the confusion is replaced with chaos. There were no Satanists. Just rich bankers who had bought an alien monster from the Army. They knew White Falcon thought himself an arm of God, and would crash an organization worshiping Satan, so set the fake party up to trap White Falcon, then bring their alien monster in to kill the hero. Levy is the young prostitute they were torturing (her name is Jessica Morris). She almost died in the resulting fire, but lived and plotted the deaths of the nine DOB members. In the end, everyone dies, except Cynthia Rodriquez who wasn’t around in the final confrontation. The alien monster took over Black Dove’s body and merged with him, and they live beneath the ground, away from military control and everyone else.

Personally, I thought this novel wasn’t worth three stars. It was too confusing throughout the story. A drug addict gives Cynthia a clue, a Monarch butterfly. It appears the DOB nine want to go by the name Monarch for some reason. The clue was as dumb as most of the story. And truthfully, Cynthia could have been left out of the story and she wouldn’t have been missed. At one point Black Dove calls Lt. Wells, Sparrow, which makes him a behind the scenes hero, I guess. And Edmund White’s (White Falcon) chauffeur and man servant, Nasir Dajani (Muslim) is Gray Crow, another hero. Black Dove is black, of course. Did I mention all the profanity? This is a comic book prose novel, and leaves the story open for a sequel, in which we will learn if Black Dove will remain a hero, or be a villain now that he is merged with the alien creature. There is no way I can recommend this book, it just wasn’t worth it.
Read more
Helpful
Report abuse

Ryan
5.0 out of 5 stars What if Batman was into Ayahuasca?
Reviewed in the United States on March 22, 2020
I thoroughly enjoyed reading this book. Full of great twists and vivid imagery. A very smart and thought out take on classic vigalante superhero tropes with a dash of psychedelia. Check it out!
Read more
One person found this helpful
Helpful
Report abuse
See all reviews
Back to top
Get to Know Us
Make Money with Us
Amazon Payment Products
Let Us Help You
EnglishChoose a language for shopping. United StatesChoose a country/region for shopping.
© 1996-2021, Amazon.com, Inc. or its affiliates