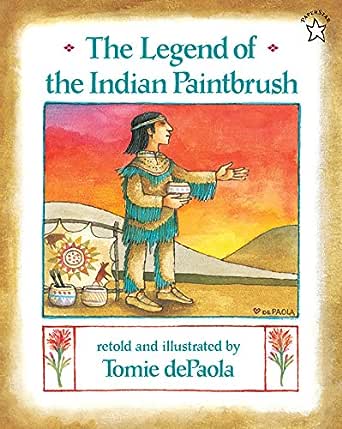 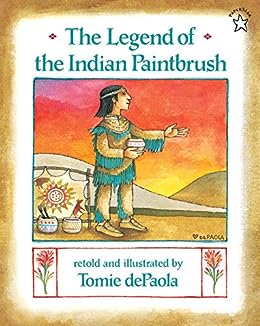 The Legend of the Indian Paintbrush Kindle Edition

In this companion to The Legend of the Bluebonnet, Little Gopher is smaller than the rest of the children in his tribe and can't keep up with those who ride, run, wrestle or shoot with bows and arrows. But, he has a talent of his ownhe is an artist. When he grows older, a Dream-Vision comes to him: a young Indian maiden and her grandfather tell him that he will paint pictures of the great warriors with colors as pure as the evening sky. Little Gopher's paintings never satisfy him because the colors are dull and dark, but he keeps trying. In the night, a voice tells him how to find paint-filled brushes; Little Gopher locates them, and they become brilliantly colored flowers known as Indian Paintbrush. This tale is related with deceptive simplicity by dePaola; he enhances the plainness of the story with his primitive illustrations, and, like Little Gopher, he finds inspiration in the colors of the sunset. Ages 2-7.
Copyright 1988 Reed Business Information, Inc. --This text refers to the hardcover edition.

Little Gopher follows his destiny, as revealed in a Dream-Vision, of becoming an artist for his people and eventually is able to bring the colors of the sunset down to earth. --This text refers to the hardcover edition.
Read more

4.8 out of 5 stars
4.8 out of 5
231 global ratings
How are ratings calculated?
To calculate the overall star rating and percentage breakdown by star, we don’t use a simple average. Instead, our system considers things like how recent a review is and if the reviewer bought the item on Amazon. It also analyzes reviews to verify trustworthiness.

V. J. McPherson
5.0 out of 5 stars Love this story
Reviewed in the United States on June 26, 2019
Verified Purchase
I purchased this product used and the book was in great condition.
I love the story of the Indian Paintbrush. I gave this copy to my daughter, along with the Legend of the Bluebonnet, for her 1st birthday (I pressed the specific flower in each book). My son decided his sister should be called "Bluebonnet" so she is my Texas wildflower.

Arie Farnam
3.0 out of 5 stars Nice story but stilted
Reviewed in the United States on August 14, 2012
Verified Purchase
This could have been told much better. It uses stilted language that is used in so many pseudo-Native American legends. It makes it less accessible to kids. This is a very nice story. I don't know if it is a "real" legend or mae up but it is a good story with reasonable plot and good for cultural learning but it could have been better written. Illustrations are fine for kids, clear and descriptive.
Read more
4 people found this helpful
Helpful
Comment Report abuse

D. Moller
3.0 out of 5 stars Stay home and earn a flower
Reviewed in the United States on December 5, 2014
Verified Purchase
It's an ok little story, but not particularly original. My four year old tired of it rather quickly, as did I. A boy has an artistic talent, which he fosters instead of being a hunter. He's rewarded by bringing flowers to the prairies. I wish there was more to it, or that the moral was more interesting or just better. Or at least that the art work was more impressive. Its mediocre all the way round
Read more
One person found this helpful
Helpful
Comment Report abuse

Jb
5.0 out of 5 stars Class Book of the Month
Reviewed in the United States on May 24, 2019
Verified Purchase
Good buy. My little girl loves this book. It was decently priced too.
Read more
Helpful
Comment Report abuse

Sunny Blaine
5.0 out of 5 stars A Real Indian Legend
Reviewed in the United States on February 2, 2018
Verified Purchase
I just read this story to my grandson and I must say it was beautiful. I'm not a mushy kind of person but this was awesome. He loved it too.
Read more
One person found this helpful
Helpful
Comment Report abuse

glh
5.0 out of 5 stars Indian Paintbrush Story
Reviewed in the United States on May 1, 2018
Verified Purchase
Wonderful little book about the story of the Paintbrushes seen along the hills and highways in the Spring. Enjoyed it.
Read more
Helpful
Comment Report abuse

Hillary Lovell
5.0 out of 5 stars Classic
Reviewed in the United States on October 9, 2018
Verified Purchase
I use this book to teach Native American legends in my classroom
Read more
One person found this helpful
Helpful
Comment Report abuse
See all reviews